Banksy at the RDS: 14 prints for sale but original work virtually impossible to find 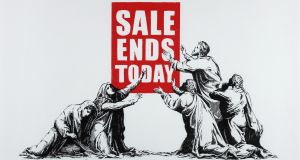 The largest public exhibition in Ireland of works by graffiti artist Banksy will feature at Art Source, an exhibition of 200 artists and galleries at the RDS from November 15th-17th.

Banksy’s true identity remains a mystery (street artist/vocalist from the band Groove Armada, Robert del Naja, and street artist Robert Gunningham are both considered possibilities), but it’s safe to say his reputation has come a long way since his stencils appeared illegally in public spaces in 1990s Bristol.

In 2015, a developer expected to buy a block of offices from Camden Council in London, was informed they must remove a Banksy stencil of a rat, and return it to the authority before the sale, showing the 360-degree turnaround to what was once considered defacement.

It is the largest known painting on canvas by the artist, measuring almost 4m (13ft) wide, of a House of Commons scene, depicting members of parliament as apes. With the Brexit furore as a backdrop, an eager buyer paid five times the higher estimate in a 13-minute bidding war.

But at least that buyer left with the painting intact.

During a stunt at a Sotheby’s auction in October 2018, a well-oiled publicity machine organised the painting Girl with Balloon to go through a built-in shredder in the frame – as soon as the hammer fell at £1.04 million.

The buyer was not in the least put out, deciding to keep the remains, which had been given the new moniker Love Is in the Bin.

“At first I was shocked, but I realised I would end up with my own piece of art history” said the buyer, of the scraps of paper of which she had just paid in excess of a million pounds.

Sotheby’s claimed it was unaware of the stunt, saying they were “pleased to confirm the sale of the artist’s newly titled Love Is in the Bin, the first artwork in history to have been created live during an auction”.

It is hardly convincing that the auction house, with layers of security and CCTV, were not cognisant of the caper in advance, whereby a £1 million painting would end up as scraps of paper within seconds.

The stunt appears to have catapulted Banksy to a level where he is now one of the hottest commodities in the contemporary art world.

“After the shredder incident we had calls from serious collectors in Asia and the US, and I believe some under bidders for Devolved Parliament were worldwide museums” according to Gerard Gormley of Gormleys Fine Art, who has 14 Banksy pieces at Art Source.

Doing exactly what Banksy derides them for, buyers fought it out for 29 prints at the Christie’s online I Can’t Believe you Morons actually buy this S**t sale this September, which grossed €1.4 million. The top lot, Girl with Balloon achieved €459,000, a new record for a Banksy print.

Gormley is well aware how prices for Banksy prints are soaring over the past year: “We recently sold a signed Pulp Fiction print for €14,000, and 10 days later another sold through a different gallery for €34,000, so we lost out on that.”

Banksy’s original work is only for sale through his “handling” and authentication company Pest Control, which states on their site: “Please be aware that because many Banksy pieces are created in an advanced state of intoxication the authentication process can be lengthy and challenging.”

It appears that no matter how much he insults his collectors, they cannot get enough. “There is little or no supply of new work by the artist, and it is almost impossible to get on to waiting lists for original works,” says Gormley.

His prints have achieved renowned status, given the prices they sell for, and he has moved far beyond the realm of street artist, with serious collectors now on board. “He has become master of his generation, who turned the art market upside down just like Andy Warhol did,” says Gormley.