Santry scheme to include 25 three-bed, 88 two-bed and 24 one-bed apartments 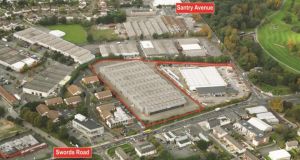 Santry development: the site sold to Dwyer Nolan has a mixture of zonings, including employment creation

The developer Dwyer Nolan has quietly acquired a 1.89 hectare (4.67 acre) site in Santry, north Dublin, and has begun initial site works to facilitate the development of a mixed-use scheme to include 25 three-bed, 88 two-bed and 24 one-bed apartments. An existing 10,339sq m (111,288sq ft) warehouse that occupies the site will be mostly demolished, with just a small portion being salvaged and redesigned as office space. Brand-new office space is also planned for the site, as well as two large communal gardens, retail units, a creche, more than 260 car parking spaces and 214 bicycle spaces, at ground and basement level.

The site, which is accessed from Santry Avenue and also has frontage on to Swords Road, was acquired by Roscommon businessman Jim Callery in 2014, for about €2.165 million. Soon after purchasing it, Callery transferred the property to a family investment vehicle, Carnamadra, which secured planning permission to redevelop the extensive site.

In November 2018, the Callerys flipped the site to Zoltorn, an entity associated with Dwyer Nolan. It’s likely that the family, of Westward Group fame, have made significant gains thanks to acquiring the site at a low point on the market and securing an attractive planning permission.

A neighbouring site recently sold for about €3.8 million per acre without planning permission – more than eight times the price paid by the Callerys. However, that site was zoned residential, whereas the site sold to Dwyer Nolan has a mixture of zonings, including employment creation, and therefore may have commanded a lower value per acre despite having full planning permission.

Dwyer Nolan, led by Ann and Edward O’Dwyer, reported profits of nearly €22 million in its most recent annual accounts and is one of a handful of builders pioneering Dublin’s Private Rented Sector (PRS), having sold 405 units last year in three deals worth €143.5 million. At Hampton Wood in Finglas, the developer sold 128 apartments to landlord IRES for €40 million, along with a €35 million sale of 92 houses and apartments at the same development to Dublin City Council. In Leopardstown, Dublin 18, the developer sold 185 apartments at its Elmfield scheme to SW3 Capital – Tristan Capital Partners for €68.5 million.

It is likely that the developer will adopt the same tactic at its Santry Avenue development, opting to sell at least the entire residential element to an investor. Since planning permission was sought for the site in 2017, new apartment design guidelines were introduced, which – in addition to the cap on building heights in urban areas being removed last month – means that Dwyer Nolan likely has ample scope to amend the existing planning permission to increase the number of apartments proposed for the site.

Pyramid or plate, carbs or veggies: What really is the ideal diet?
8