Upside down Sandymount two-bed with courtyard for €595,000

Upstairs in this mid-terrace Victorian is the real selling point 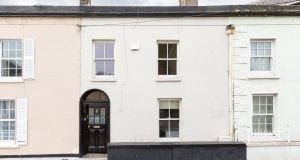 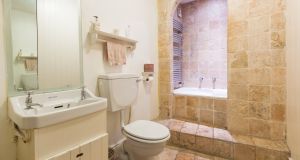 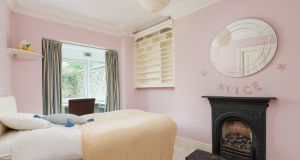 The larger bedroom with fireplace. 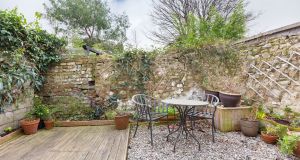 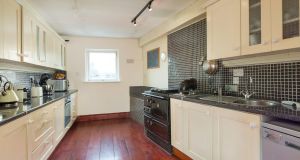 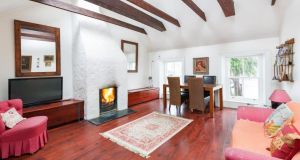 The property which is inverted in layout – the living, dining and kitchen spaces are upstairs, with bedrooms at hall level – was purchased by the current owners in 2003. Now with a growing family they have placed it on the market through Sherry FitzGerald with an asking price of €595,000.

Inside the front hall are two double bedrooms; the one to the rear is larger with a cast iron fireplace – currently housing a gas fire. There is access to the rear courtyard via a door from this bedroom, which is closed off by an inbuilt desk, but could easily be reopened. Both bedrooms share a fine sized bathroom housing a full sized bath set within a travertine arch.

Utility units lie in storage units under the stairs, and from here there is access to the rear courtyard garden – with Clematis Armandii on the cusp of blooming.

Upstairs is the real selling point, and the inversion of the house makes quite a lot of sense. The layout, from what would have been two small bedrooms to an open plan living-cum-dining area, allows a large open space for relaxing and entertaining. The ceiling goes right up into the pitch of the roof giving a greater sense of space and leaving the beams exposed. The room is remarkably bright, thanks to overhead Velux in addition to two sash windows overlooking the avenue.

The kitchen can be closed off via sliding doors and features an old Aga; there is a further oven and large gas domino unit to cater for all cooking requirements.

The house could be improved by sanding the upstairs flooring – its current red mahogany stain has a darkening effect on the kitchen and living area and might be more in keeping with the property’s era if the original honey tones were exposed.

New owners will also want to address the BER rating – which is currently an F– but the property has a fireplace in the living/dining area to warm the space in the interim.

The lean-to – onto which the rear bedroom is attached – also needs a sand and repaint externally, but these are cosmetic changes, and at €595,000 with a courtyard appears to be good value for such a location in Dublin 4.

Belfast feels anything but claustrophobic to this Dubliner
3