Architects seek to ‘capture spirit of Ireland’ – in Tokyo 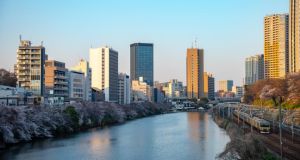 International architectural competitions are notoriously challenging but the brief for the latest one to hove into view seems particularly demanding – not least because the winning building has “to capture the spirit of Ireland”.

The Department of Foreign Affairs and Trade, in conjunction with the Royal Institute of the Architects of Ireland (RIAI), has announced a competition for a new Ireland House in Tokyo.

When built it will be home to the Irish embassy as well as several State agencies such as Enterprise Ireland and the IDA.

The winning building must demonstrate that “Ireland is at the forefront of modern international architecture” and its design should capture “all aspects of our rich heritage, culture and Ireland’s position as a modern, forward looking and technology-driven nation”.

Not a small ask by any measure.

At present, Ireland’s embassy in Tokyo is a modest one, located in what has been described as a nondescript building in the Hanzomon business district. The move follows the purchase by the department last year of a site in Tokyo’s very smart central Yotsuya district for €7.7 million – a 37 per cent discount on the site’s value on the basis that it is to be used for diplomatic purposes.

A further €15 million will be spent on the design and construction of the prestige project making it the largest capital spend ever made on a single building by the Department of Foreign Affairs.

The competition, which is not restricted to Irish architects, is being administered by the RIAI, and the winning team will also manage the delivery of the project.

The new Ireland House format – accommodating several State agencies under one roof in one branded building – is seen as a more cost-effective way of representing the State and Irish commercial, cultural and tourism interests overseas.

The format will be rolled out at a number of locations in the expansion of Ireland’s “global footprint” under the Government’s “Global Ireland 2025” plan to add a further 26 embassies and diplomatic missions.

The expected date of completion of Ireland House is 2020 – which at the very least suggests that Japanese efficiency extends to building practices too.