Church conversion a leap of faith for Co Down couple 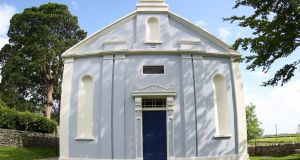 There is a soothing, peaceful stillness inside the former Presbyterian church which Melanie and Marty Hamill have restored and converted into stunning self-catering accommodation in the seaside village of Strangford, Co Down. Sitting proudly as the welcoming landmark at the entrance to the village, you would never know that just a few years ago Quarry Hill Church had been in a severe state of disrepair.

What first strikes you about this eye-catching building is its entrance, and the beautiful shade of blue on the facade. As you pass through the vestibule there are original flagstones on the floor which leads to the open-plan living area. This is a spectacular room which architect Melanie has cleverly designed to include a high-spec kitchen, lounge and dining area with its double-height ceiling and huge original Georgian windows letting light stream in from all around.

Above is a mezzanine, accessed via a staircase featuring the original church pulpit. The five bedrooms are all cleverly located to the back of the property, allowing the main room to shine.

“I am so pleased that we managed to restore and retain the original pulpit in a central position, using it to form part of the staircase up to the new mezzanine level,” said Melanie Hamill. “This, along with the repaired organ, which my Dad painstakingly restored over many weeks, are my favourite aspects [of the building]. The large double-height living space is a magical, highly sociable space, filled with natural light even on a dull day. This part of the church was known as the sanctuary; we like to think it is still just that.”

The couple and their three children moved to the house next door to the church in 2016 and soon realised this listed building was in urgent need of loving care and refurbishment. It was built in 1846 but had lain derelict for many years as the congregation dwindled. It had been on the Buildings at Risk register since 2003. The couple knew they wanted to save it and approached the owners about buying the church and they eventually agreed to sell. The purchase price was close to £100,000 (€111,346).

“We both knew the building from our childhoods and had watched it slowly decline over the years which was such a shame. When we bought the house next door and could see at close hand the state of the church, it convinced us that we should act,” said Melanie.

Building work began in the summer of 2016 and was complete this May. Their first concern was to make the building safe and watertight. It cost almost £100,000 for the first phase of emergency repairs and restoration works, according to Marty.

“When we bought it there was a huge hole in the ceiling, parts of the rose had fallen down. There was damp coming in down the walls, roof slates were missing and the windows were boarded up and the top of them were smashed. So we repaired the roof, the ceiling, the windows, those sort of repairs and then the actual conversion work probably started in August or September last year.”

Red tape connected to the conversion of a listed building caused a further delay but work resumed last September. The couple estimate that the total spend was £450,000 from purchase to completion.

The Hamills have known each other since childhood and both attended the same primary school which their three children now attend in the local village. Melanie is an architect and Marty an engineer and it’s evident that this was a very precious project to them as a family, and as Strangford residents.

As well as the roof, doors and windows, the ceiling and lime plaster had to be repaired and decorative plasterwork delicately restored on the stunning rose in the main sanctuary’s ceiling. Then services including water, electricity, plumbing and phone utilities had to be brought in. The church had no heating or plumbing when they took it on.

“Insulation was added underneath original timber floors and above the original ceiling. Both ceiling and floors were restored and retained. All insulation we have used is natural and breathable, along with breathable paints used on the stone walls and plaster and lath ceilings.”

There are three beautiful bedrooms to the back of the ground floor and a family bathroom with a gorgeous free-standing bath. Upstairs is the mezzanine area and two more bedrooms. Four bedrooms are en suite and the fifth has access to the family bathroom.

Restoring as many of the original features as possible was of great importance in this conversion and lots of them are dotted throughout the property. They used as much of the existing panelling from the church as they could on the walls.

“We felt a responsibility to look after all original features and protect this part of local heritage. As a Presbyterian church or meeting house, the type of architecture is simple and classical: nothing overly ornate that could be seen to be distracting to the message from the pulpit.”

The front door key was missing and even after lots of research, they could not find it. Melanie’s father suggested he could make one and removed the lock and made the large key to fit.

As well as staying true to the history of the building, the couple also wanted the community to feel they were involved and ensured that everyone, such as joiners and stone masons, who worked on the restoration was local. Even the cushion design is by a local artist, Joanna Martin, because Melanie wants guests to know where they are and to show off the best of it.

“I just think it’s a beautiful place, even saying that myself. It has a feeling of luxury about it, I think. You’ve got your own really beautiful bedrooms and Strangford is just great. It’s a lovely place to be and to have this to stay in with all your friends or family, it’s just stunning.”

Melanie’s approach to decoration was to be respectful of the building’s history, enhancing the original features while highlighting what was new. She went for heritage colours with modern furniture and facilities.

“New stud walls are all Farrow & Ball shades, while stone walls are Little Green breathable paints to suit lime plaster walls. It was our philosophy that new additions are obviously modern, such as the structural steel beams and glass balustrading. The addition of internal glazing to the bedrooms provides a connection back to the main sanctuary space of the church, with glass floors installed within the first floor bedrooms to allow for a full view of the original tall windows. All bedrooms are designed and detailed to feel like a luxury boutique hotel.”

“We got into it as a jump into the dark. If we knew the full extent of it we might have thought twice, but to be honest we’d still have done it,” said Melanie. “We may be the owners but we regard this building as a key part of local heritage, we have a responsibility to look after it for future generations. Without a sustainable use a building will never have a secure future and we feel that its new use as tourist accommodation in such a beautiful corner of Ireland will give it a safe future.

“It is important for us that the local community retain a bond to the building, it is part of the village history.”

Have you recently renovated a house, or built a new one a new home from scratch? If so, we’d love to hear your story. Please email us with, with sample photographs, to homeanddesign@irishtimes.com