100 years ago, the functional designs of Gropius and his followers first saw light 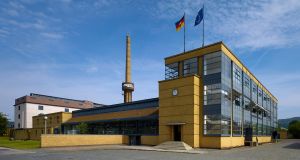 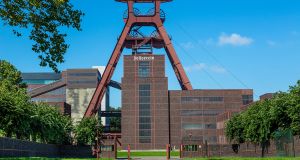 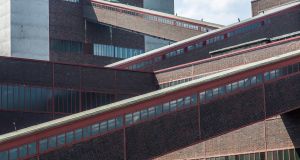 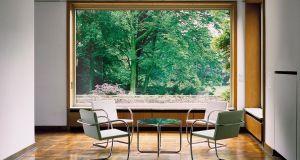 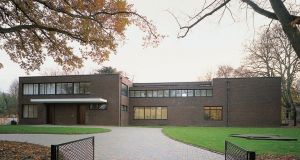 At the centenary of the birth of the Bauhaus design school in 1919, the focus will be on the college building in Dessau, on Germany’s east side, just south of Berlin. But that building, with its horizontal lines and walls of glass, looks remarkably similar to a building its designer – and founder of Bauhaus – Walter Gropius designed eight years before, in Germany’s industrial west.

One of the legacies of Bauhaus, which taught art, architecture, furniture and object design, was an industrial design aesthetic that circles back to the origins of Bauhaus. In Germany’s industrial heartland, on its western border, you can see how industry helped to shape Modernist architecture. Steel framed factories allowed for huge – wall and column-free – expanses inside the buildings and lots of natural light through vast glass panes. “More glass than wall,” became a phrase linked with Bauhaus and Modernism.

The stairs at the entrance to the Fagus factory, which makes shoe moulds (or lasts), float free from the glass external walls which wrap around a corner, seemingly without support. In the factory itself – in Alfeld, north of Dusseldorf – natural light floods in through multi-mullioned windows that were forerunners to those in the Bauhaus college at Dessau.

Gropius knew a relative of factory owner Carl Benscheidt who had fallen out with the owners of another shoe-last company he worked at in Alfeld. He borrowed money to build a new factory across the railway track from his former employer and commissioned an architect, Eduard Werner.

Benscheidt met Gropius on a business trip to Berlin, where the architect had set up practice after working for Peter Behrens who was at the forefront of the post-first World War Werkbund design movement, which was a precursor to Modernist architecture.

Keen to get the factory job, Gropius persuaded Benscheidt that he and Adolf Meyer (who had also worked with Behrens) would design with a new vision; one that would honestly express the materials used – in line with the Bauhaus (also known as International Style) concept of a harmony between function and design, in both buildings and objects. A lack of ornamentation added to this honesty.

For Gropius, architecture had a social role and he persuaded Benscheidt that good working conditions were not only good for people but would improve productivity. These concepts guided the 1911 design of the Fagus factory which, while a brick building, does not have load-bearing external walls. Instead reinforced concrete columns and iron frames allow the façade to float free.

It has since been given Unesco World Heritage status, as has a coal mine built nearby, in Essen, built between the two World Wars, during Germany’s “roaring twenties” boom. The owner wanted “the most beautiful mine in the world”, and employed architects Fritz Schupp and Martin Kemmer, students of Gropius, who answered the call with a group of buildings now often referred to as the “Bauhaus mine” due to their geometric brick facades.

The design brief also required the Zollverein mine to yield 12,000 tons of coal every day. The site expressed the disparity between beauty and darkness, with its sculptural pit-head tower delighting visiting business people and dignitaries while the miners were kept largely out of sight. The rattling of lumbering machinery made the steel-frame building – with non-supporting brick outer walls – a necessity as much as a Bauhaus aesthetic, as the leaden trucks and chains would eventually have shaken the building apart.

The 100-hectare former factory is now a thriving visitors’ centre – complete with cafe and coal trucks tour – with new buildings by Rem Koolhaas and Norman Foster.

The geometric, brick form of the key Zollverein buildings and the Fagus factory, was downsized and replicated in two houses that Ludwig Mies van der Rohe, who for a time ran the Bauhaus school, designed for silk-weaving industrialists Hermann Lange and Josef Esters in the town of Krefeld, near Dusseldorf, in the late 1920s. He also designed them a factory nearby.

The two houses, side by side, were donated by the families to the town and are now used as exhibition spaces: recalling a time when they displayed the wealthy homeowners’ art collections. Both houses are being renovated for the Bauhaus centenary .

The simple, cubic volumes again have steel frames that enable vast windows and cavernous interior rooms that sweep into each other through sliding walls. While the Lange house is free of ornamentation, it is enhanced and animated with sumptuous materials and volumes, all kept within the strict geometry. For instance, the high front door is in a rich, thick wood with tiger stripes while the window sills are in an elegant stone, bearing out the Miesien phrase, “God is in the details”.

The complexities held within a simple shape are also borne out in the nearby VerSeid factory he masterplanned (whose footprint is similar to his later IIT campus in Chicago). The factory’s renovation is being mapped by two professors and their students.

The Lange and Esters houses, the Fagus factory and Zollverein mine are in brick, yet the Bauhaus style later became synonymous with white cubic buildings. This design was used during the 1920s by architect Otto Haesler – a one-man Modernist show – in the town of Celle, which is rich in half-timbered homes.

“Baroque to Bauhaus” goes the town’s current slogan as they highlight Haesler’s work. He began by designing in a classical style for wealthy local businessmen. But after the first World War, he built social housing – projects include the red, white and blue Italian Garden scheme and the steel-framed Blumlager Feld.

A meandering trip up Germany’s west side, from Dusseldorf to Hamburg, takes in all of these forerunners and contemporaries of Bauhaus. The college lasted just 10 years because the Nazis denounced its design and architecture as degenerate and many of its designers left for the US. But by then the Modernist genie was out of – or at least borne out of – the box.

Bauhaus: An industrial art of design

As with the Arts and Crafts movement, which responded to industrialisation with a reverence for hand-crafting, Bauhaus sought to blur the distinction between crafts and fine art, and later combined art and industrial design.

Its architecture had straight horizontals and verticals, and plenty of glass

The Nazis thought Bauhaus design was degenerate and the school closed in 1933 when Hitler became chancellor.

The Roscommon man who became a sumo wrestler in Japan
3

Where does this bile against Meghan Markle come from?
6