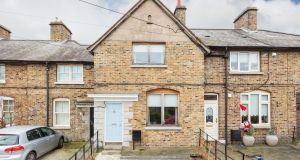 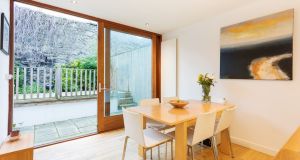 The kitchen out to the patio. 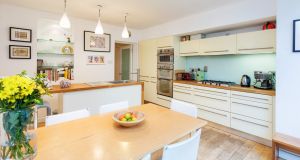 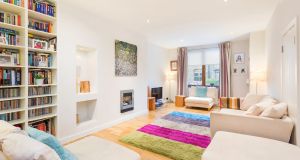 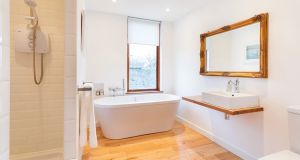 An architect bought 23 McDowell Avenue in Kilmainham’s Ceannt Fort as her first home in 2002. It needed modernisation, and her complete renovation included adding a two-storey extension to the rear so that now the attractive looking granite and brick-faced house has a good-sized living room and eat-in kitchen downstairs and two double bedrooms and a large bathroom upstairs.

That work brought the size of the mid-terrace house to 88sq m/ 947sq ft. With a growing family the owner is moving on again and number 23 is for sale through Eoin O’Neill Property Advisers for €425,000.

Houses this size tend not to have a bathroom with both a freestanding bath as well as a shower cubicle but number 23 has all that thanks to the upper floor extension. On this level the ceilings were also raised to follow the roofline giving a terrific sense of space in the bedrooms and landing. Another attractive design feature is the recessed shelving in the living room.

While it is described as being in walk-in condition, new owners will probably do work in the kitchen, either replacing the units entirely or simply getting new doors and splashback as well as new appliances. Floor-to-ceiling glazed doors open out to a patio-style decked rear garden. The oak floor which runs throughout the ground floor is now showing signs of wear and could benefit from a resanding.

Originally called McCaffrey’s Estate, the warren of narrow streets here was laid out between 1917 and 1922 on a substantial elevated site in Dublin 8 to help alleviate the city’s chronic housing shortage. The name change to Ceannt Fort was made to honour Éamonn Ceannt who was executed for his role in the Easter Rising.

The estate was built and designed for a time before car ownership became commonplace so parking is scarce on its very narrow roads, although number 23 comes with the benefit of off-street parking for one car.

Though a new listing, by Saturday’s open viewing, 40 parties had already viewed the house, according to the agent – mostly young first time buyers reflecting a strong level of interest. One puzzling feature is the Ber – it’s an E1 – a very low score for a house that has relatively recently been renovated.

Ross O’Carroll-Kelly: ‘I just shake my head ... The dirty dog. The filthy hypocrite’
8