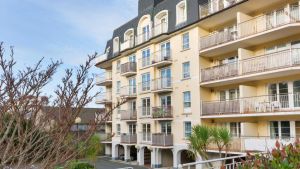 The location of a two-bed apartment in Dun Laoghaire is one of its chief attractions: Clearwater Cove, a scheme of over 100 apartments built by developers Cosgrave just over 20 years ago on Dun Laoghaire’s coast road, is a short walk from both Dun Laoghaire town centre and Monkstown village, as well as Salthill & Monkstown Dart station.

Interior designer Joe Ensko bought 81 Clearwater Cove not long after it was built. Now Sherry FitzGerald is seeking €425,000 for the 64 sq m (689 sq ft) two-bed apartment on the raised ground floor of the five-storey development.

It’s likely to appeal to downsizers because of its convenience, but anyone moving from a large house in the area is likely to find the apartment slightly cramped. The layout is challenging, but it’s been decorated to maximise a feeling of space.

Walls are painted pale taupe, floors are either dark timber or tiled and the narrow entrance hall is floored with glossy white tiles.

The living/dining room has a large timber fireplace, smart fitted shelving and French doors opening onto a Juliet balcony that overlooks the busy – and noisy – coast road to the steps across the Dart line leading to Dun Laoghaire’s west pier.

The main bedroom, a modest-sized double, has dark wood-effect laminate flooring, fitted wardrobes and French windows opening, like the galley kitchen beside it, onto a balcony with a tiled floor and room for a table and chairs.

Ensko, of Merrion Square Interiors, says the balcony – which overlooks the communal car-park – gets sun for much of the day.

The bedroom has a small en-suite bathroom with a bath; the main bathroom off the hall is a small shower room.

The second bedroom, a single, is currently fitted out as a small living room with a sofa bed and fitted wardrobes. It overlooks the coast road.

The well-equipped galley kitchen is long and narrow with white-tiled splashbacks: a door at the end opens onto the balcony.

There are only glimpses of the sea across the Dart line from the apartment, but wide sea views from the roof, accessible by lift: Ensko says he used the roof garden quite a lot.

Electronic gates open into the scheme which has communal parking. The annual service charge is €1,800 per year.