Prices start from €450,000 for three-bed properties in Glenheron development 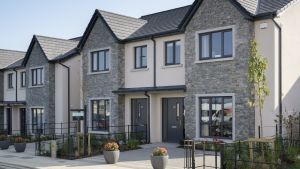 Situated on the edge of town Cairn’s Glenheron development in Greystones is a site that has made headlines since it first launched in June 2017 with 25 homes selling off plans. Prices for its three-beds started from €400,000 and from €465,000 for the four-beds.

Last October a new phase of 30 properties in the same part of the development was brought to market. Prices started at €440,000 for three-bed terraced units and from €450,000 for a three-bed semi-detached. A four-bed semi was from €489,950, while the four-bed detached bungalows were priced from €585,000.

With 125 of the 242 units now sold, a further tranche of the architect-designed, A3-rated homes clad in natural grey stone, with granite to the sills have come on stream.

This time around agent SherryFitzGerald has taken on children’s entertainer Sillybilly to entertain visitors viewing the new release of 30 units.

There are terraced, semi-detached and detached bungalows on offer. Of the 10 three-bed units most are three-bed semis of 113sq m (1,216sq ft) priced from €450,000. The same sized terraced versions start from €440,000 with a convertible attic.

There are two different styles of detached four-bed bungalows. A smart buy for those thinking ahead to retirement, these range in size from 134sq m (1,442sq ft) and cost from €585,000.

Inside, there is a contemporary fitted Kube kitchen with Silestone worktops and a separate utility room. The showhouses have been fitted-out by Elaine Mackenzie-Smith of Number 10 Design and CA Design.

Buyers can avail of the Dart for a scenic commute to Dublin city while the Luas green line service is a 20-minute drive.