Are scented candles disguising something sinister?

Philip Judge: A room’s bouquet can make a statement, but what’s wrong with the smell of home? 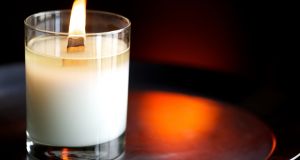 When I do see a flickering scented candle, I can’t help suspecting that it has been lit, not to evoke an atmosphere but to disguise something sinister.

Away from home these past few weeks, I have missed my wife, our sons, the dog and our small cottage on a country acre in Wicklow. I’ve slept indifferently in a succession of indistinguishable hotels: each bland room blending into the next in a slow cross-fade of pale beige, muted grey and occasional, “tastefully” subdued purple.

The deliberately anonymous decor; the inoffensive, pointless “art” on the walls; and the precisely calibrated, air-conditioned ambience create a limbo where mood and moment blur. These places, though adequately comfortable, are instantly forgettable because they share exactly the same aroma . . . of nothing.

A place is identified by its scent as much as its walls, decor or furniture and every house has its own distinctive smell – a subconscious dimension perhaps but it helps define a dwelling. Some years ago I was at the wake of a friend’s father in the Dublin family home. Popping upstairs to the bathroom I passed an open bedroom door and was suddenly back in my grandparents’ house. The smell of the venerable wardrobe ingrained with decades of beeswax polish combined with that of the heavy eiderdown on the old oak bed, evoked a Proustian wormhole and I was beamed back to my boyhood in Glasnevin.

During my travels, the temporary, anodyne accommodation has made me gradually aware of an indefinable emptiness – the lack of comforting associations that aromas can have – and I miss my natural habitat all the more. Then I speak to my wife and she tells me of a mystery smell in the cottage that currently has her tormented. Our recent phone calls have been punctuated by sudden loud sniffs then the clatter of the handset hitting the table as she drops to her hands and knees and roots around saying “there it is . . . no . . . it’s gone again”.

Apparently it’s similar to the rank odour that pervaded the car years ago. I remember weeks of gagging and fruitless search before we finally discovered that one of the boys had spilt milk into the pouch where the seatbelt clicks into place. The old smell has come back to haunt her. She has investigated every corner of the kitchen, every nook, every cupboard, every cranny and is nearly deranged. She has scrubbed, wiped and polished. She has been up step-ladders, under tables, behind sofas and utterly beside herself. She has found nothing. I wondered if it was all in her imagination but the boys corroborate the story – they too have been perplexed by the phantom fragrance.

I understand her anxiety: an unwelcome odour is not only unpleasant, it is also unsettling. It is a disturbing indication of another presence; something from elsewhere that obtrudes against the white noise, the familiar, background “aural” radiation of the home place. A messy house is annoying – with two sons it often is. Clutter can offend the sight but is easily fixed; it can be tidied. However, an out-of-place smell is more fundamental – the tiniest alien whiff subconsciously tells you something’s not right.

There’s no point suggesting she light some scented candles from the stash under the stairs. Every household has a few of these unwanted gifts loitering somewhere although I have rarely seen one in use. When I do notice one flickering in the corner I can’t help suspecting that it has been lit, not to evoke an atmosphere but to disguise something sinister, which would actually be right in this case.

An entire artisan industry has sprung up making these things. The architecture of aroma now seems as integral a part of home design as colour schemes and soft furnishings. A room’s bouquet can certainly make a statement. I remember hanging out with “cool” hippies in my teenage years when the soporific atmosphere of patchouli oil and joss sticks established a dwelling’s personal identity as powerfully as cut flowers or pots of fresh basil do now.

When we lived in a small flat in the city, mood-enhancing scented candles were all the rage. We acquired many and even used some. The light they cast was usually soothing and the fragrance often innocuous. But even the most pleasing perfume is superficial and evanescent – it doesn’t really constitute what makes a house a home. And now that we live in the country with two boys and a dog, scented candles are as assertive as a sparrow fart in a gale.

I selfishly admit to hoping the strange odour has gone by the time I return. I want nothing to mask the familiar smells of home. Depending on the time of year, the surrounding hills are redolent of either the sharp foreground note of cut silage or the background chord of spread slurry. I used to think of both as a stench. Now they are fragrances.

The first heralds the harvest’s arrival and the second evokes renewal of the soil in preparation for the planting yet to come. And on our acre, the year is marked by winter wood-smoke; the new mown grass in spring; the summer breeze; and ripe fallen apples right now.

In Sight of Yellow Mountain by Philip Judge is published by Gill Books.