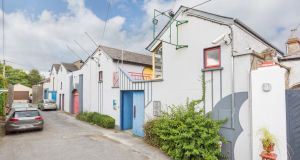 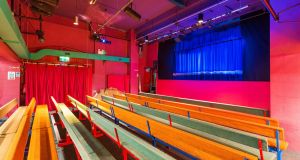 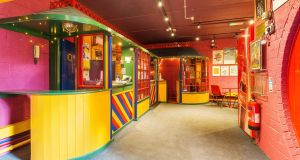 Inside 4 & 5 Clifton Lane in Monkstown. 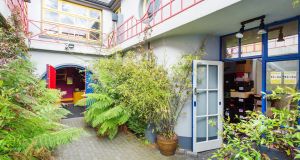 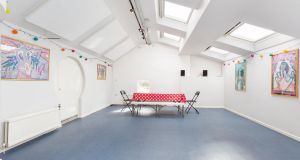 A barrel-shaped door opens onto a gallery inside 4 & 5 Clifton Lane, Monkstown, Co Dublin. 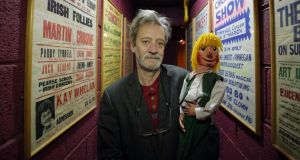 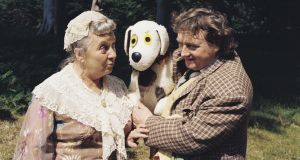 Nora O’Mahony as Godmother, Judge the Dog and puppeteer Eugene Lambert as O’Brien from ‘Wanderly Wagon’, which ran on RTÉ Television from 1967 to 1982.

In the workshop upstairs, a knight dressed in silks brandishes a sword; nearby, a gaunt princess stares into the middle distance, both surrounded by a slightly eerie collection of puppet pals. There are boxes of finery labelled “yellows”, “greens”, “blues” and a wall of apothecary style drawers filled with everything needed to create puppets. Now the puppets’ home is being sold after close to 50 years.

Downstairs, just past the fern-filled entrance foyer of the Lambert Puppet Theatre, more puppets sit over the door of the inside lobby and hang behind the blue-curtained stage where puppet shows entranced thousands of children over the years. A teddy puppet on a table is a gift Liam Lambert, the theatre’s owner, has just received from a child saddened to hear about its closing.

Since he announced its closure a month ago, Liam, the second youngest of Eugene and Mai Lambert’s 10 children, has received dozens of messages from home and abroad: they contain memories, like those from fans who remember Wanderly Wagon– one of the children’s TV programmes created, along with Bosco, by Liam’s father – as the only colour in their lives.

But nostalgia can’t pay for the upkeep of a theatre that has struggled over the past decade, mainly because of the recession and, three years ago, a fire in which 300 puppets were destroyed. The last performance was at the end of July and now 4 & 5 Clifton Lane, a mews lane behind grand Victorian houses on the coast road at Monkstown, Co Dublin, is for sale through Lisney seeking €1.25 million.

Both Liam and selling agent Rory Kirwan say it’s likely to be converted, probably pulled down. Subject to planning permission, it could be redeveloped as three, perhaps four mews houses, according to Kirwan. There are eight houses on Clifton Lane already, and it’s zoned residential.

The internal floor area of the theatre – which includes the theatre downstairs and upstairs, the entertainment area, a kitchen, the space where the puppet museum used to be and workshops – is 414sq m (4,455sq ft). The overall site is 0.03 hectares (0.07 acre) and the road frontage is about 24.7m (81ft).

Much of the space is bright and modern, revamped following the fire. A barrel-shaped door – the Wanderly Wagon door – opens onto a gallery overlooking the long benches in the theatre below. Posters from home and abroad line walls everywhere.

Eugene Lambert bought 5 Clifton Terrace, a large Victorian house on the seafront in Monkstown, and its mews for €15,000 in 1970 and opened his puppet theatre in 1972, expanding later and buying mews on either side. Liam was 11 then and, like all of his siblings, worked in the family business. (Jack, from their show Jack and the Beanstalk, is his favourite puppet.)

Monkstown has become one of south Dublin’s most exclusive suburbs, but then, many of the houses around Clifton Lane – on the edge of Monkstown village – were quite derelict, says Liam, set out in bedsits, some with no roofs. Number 5, the home he grew up in, sold for €1.6 million in 2015.

People describe the puppet theatre as an institution, says Liam, “but it’s a business . . . the accumulated effects of 10 years of recession are unrecoverable”. He’ll carry on working, putting on puppet shows like his sisters Miriam and Paula, who both tour with their shows. Liam has had inquiries about bringing shows abroad, and is exploring setting up a new venue in the city centre.

I started the ‘gender reveal’ party trend, and I regret it
5