Sean Keating’s painting among strong works from Yeats and Orpen 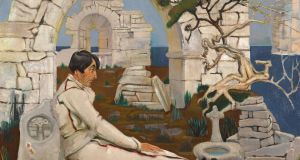 A cornucopia of paintings by some of the biggest names in Irish art is on display at the RDS in Dublin this weekend ahead of Whyte’s Irish & International Art auction on Monday. With its 168 lots the sale contains works to appeal to all tastes, from classic Irish rural scenes and early topographical views of Dublin to abstract compositions, avant-garde landscapes – and an eye-catching bronze tomato.

As so often with Irish art sales these days, the most expensive painting in the auction is Jack B Yeats’s Pilot, Sligo River 1927 (Lot 15, €200,000-€300,000), a dramatic portrait of a bearded figure in peaked cap and double-breasted jacket standing tall against a blustery sky and the village of Rosses’ Point.

However, the most important painting to come under the hammer at Whyte’s may well be Sean Keating’s Thinking Out Gobnet (Lot 26, €50,000-€70,000). In its otherworldly intensity it is certainly one of the most striking. An allegorical study from 1917, it depicts Harry Clarke set against the ruins of the ancient churches of Inis Oirr. “How Keating has painted him is almost how Clarke painted himself – right down to the pointed toes of his shoes,” says Adelle Hughes, head of art at Whyte’s.

The two artists visited the Aran Islands together in 1915. As the title of the picture suggests, Clarke was mulling over the commission which would result in his tour de force stained-glass portrayal of St Gobnet in the Honan Chapel in Cork. But he was also suffering from the TB, which would eventually kill him, and the work contains a series of talismans – a holy water font, a healing tree, and a holy well – which express the artist’s desire for a miraculous cure for his friend.

As it turned out the painting also did its creator a favour. Having gifted it to Clarke, Keating borrowed it back so that he could show it at the RHA’s annual exhibition in 1918. He was elected an associate of the academy later that year.

The landscape and portrait painter Walter Osborne was something of a family man; when his sister died he helped look after his niece Violet, and after his mother became ill in the early 1900s, he spent a good deal of time caring for her.  There are two beguiling watercolour depictions of his young niece in the sale. At A Child’s Bedside, 1898 (Lot 12, €8,000-€12,000) shows the sleeping child watched over by a female figure; in The High Chair (Lot 13, €6,000-€8,000), she sits at a child’s table in the family dining-room.

Showing Osborne’s skill as a watercolourist as well as his tender relationship with the little girl, both paintings were exhibited at the artist’s memorial exhibition at the RHA in 1903-1904 – and the provenance is almost as impressive as the works themselves; they belonged to Mrs Osborne after her son’s premature death in 1903, then to Violet Stockley and, by family descent, to the present owner.

If the watercolours are intimate so too is Osborne’s portrayal of an everyday village scene in north Co Dublin (Lot 14A, The Village Street, Rush and Lusk, €25,000-€35,000), with its flock of unruly fowl and the beautifully-captured half-light. And the sale offers yet another aspect of Osborne with  a Flemish street scene, painted while he was a student in Belgium (Lot 14, View in Antwerp, €8,000-€10,000).

A liminal experience while on a tour of Spain in the summer of 1955 led Louis le Brocquy to embark on his Presences series. “One day while passing through a village in La Mancha in shimmering heat, I stopped spellbound before a small group of women and children standing against a whitewashed wall,” he wrote. “From that moment I never perceived the human presence in quite the same way…” The painter’s revelatory understanding of light as a matrix from which the human being emerges is exquisitely rendered in Young Woman, 1961 (Lot 68, €15,000-€20,000).

It’s actually one of a number of remarkable trees in the sale. Basil Blackshaw presents an extremely sinister, brooding tree in his Castle & Tree (Lot 81, €35,000-€45,000), while at the other end of the emotional spectrum – and a considerably more modest price – is Percy French’s watercolour of a dappled, tree-lined path in the English village of Hindhead (Lot 11, €2,000-€3,000).

Those with an interest in Irish history will be interested in Sir John Lavery’s lithographic portraits of Michael Collins and Arthur Griffiths (Lot 20, €3,000-€5,000).  His nocturnal portrait of the walled city of Tangier (Lot 23, Moonlight – the Bridge, €20,000-€30,000), evokes another troubled political situation, that which prevailed in Morocco in 1912.