Marilyn Monroe’s picnic basket, anyone? Or a rare Lady Chatterley? 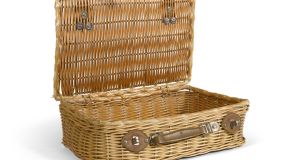 Collecting and cool decor don’t always go together. But for the American collector Stanley Seeger, buying valuable, quirky or historically significant objects was just the first step in putting together a home which was comfortable, beautiful – and fun to live in.

Born in Milwaukee in 1930, Seeger inherited his family’s oil and timber fortune. When he bought Sutton Place, a 16th-century English manor house which had previously belonged to the US oil baron J Paul Getty, he put a Francis Bacon triptych in the hall and commissioned leather supports so that he could suspend a rare, and exquisitely-shaped, Indian dugout canoe from the roof.

Seeger had an eye for small pieces, and he didn’t hesitate to let go of anything for which he had no further use. He spent years acquiring a collection of 88 works by Picasso – and then, in 1993, sold them all again.

Until his death in 2011 at the age of 81, Seeger lived with his partner Christopher Cone in various houses around the world.

A glimpse into the affectionate, humorous nature of this 30-year relationship can be had at Sotheby’s in London this month as 230 personal objects, carrying estimates which range from £100 to £40,000, come under the hammer in a sale entitled A Private View.

“Stanley and I lived wonderful dreams together,” Cone says. “It’s nice to have the chance to have found and lived with these things and now to share them with anyone who cares to dig in and discover something special for themselves.”

The catalogue is a compendium of special things. At the top of our wishlist would be Lot 218, Marilyn Monroe’s wicker picnic basket, bought by Cone as a present for Seeger from the sale of Monroe’s effects in 1999 (€668-€891). Then there’s Lot 159, (€11,141-€16,712), a copy of DH Lawrence’s Lady Chatterley’s Lover. If that seems a tad OTT for a Penguin paperback, the explanation is that this is the very copy carried by the judge at the book’s infamous obscenity trial in 1960, the Hon Sir Laurence Byrne.

The novel’s dodgy bits sport helpful annotations by the judge’s wife, Lady Dorothy, and it comes in the blue-grey damask bag with ribbon tie which she stitched for her husband so that he could bring the volume discreetly to and from the Central Criminal Court. When Cone bought the book 25 years ago – another gift for Seeger – it cost £4,370, the highest price ever recorded for a paperback sold at auction.