A history of Ireland in 13 houses, from beehive huts to bungalow bliss

The houses that define our Irishness, from the Big House to bedsits 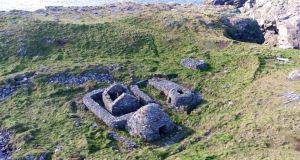 High Island is home to a monastic settlement and an intact stone beehive hut.

Long before cities, towns and villages there were monastic settlements with dwellings built from slivers of stone assembled in a way that defied logic but provided decent shelter from the howling wind and rain. Built in some of the most beautiful and windswept parts of the country, many still survive. (Skellig Michael, one of our best examples, has been reborn as a most unlikely Star Wars location.) High Island off the Connemara coast is a deserted 80-acre island with monastic ruins dating back to the 7th century, including an intact beehive hut and the ruins of an old miner’s hut dating from the early 19th century. The island is home to thousands of birds, but its actual owner, Feichin Mulkerrin, lives on the mainland and visits occasionally, as did the previous owner, the poet Richard Murphy.
Asking €1.25 million
Agent Spencer Auctioneers

Ireland’s medieval landowners kept themselves, their family and their livestock in fortified towers with a single large room on each level and a fine view of the territory, and approaching enemies, from the rooftop. From the battlements of this castle built by the Burke family near Ballinrobe, Co Mayo, the view stretches for miles towards the Maamturk mountains. Originally it would have taken in over a dozen neighbouring fortresses, but this one, said to date from the 15th century, survives intact with a refurbished interior that includes four-poster beds, luxury bathing facilities and large banqueting hall that is used for weddings and parties.
Asking POA
Agent Premier Properties Ireland

Acres of parkland, railed paddocks and stables, a facade winking with windows and plenty of attic space for the servants: the Irish big house was as elegant as its English counterpart and typically featured Italian plasterwork and fine timber from the colonies in doors and Baltic pine underfoot. A typical gentleman’s house would have been situated not too far from the seat of power in Dublin and within a day or two’s travel to London from Kingstown. A good example is the Mountainstown Estate in Navan, Co Meath, which dates from the 1740s and has been in the same family for 250 years.
Asking €2.75 million
Agent Savills

You would have come up the driveway cap in hand looking for a reference, a blessing for your sick mother or a ticket to America. All aspects of life would have been discussed in the parochial house, usually an imposing home with formal rooms to the front and a busy kitchen where the priest’s housekeeper held court. The Old Parochial house, Rosscahill, Moycullen, Co Galway, has banished any hint of its previous religious existence, having been thoroughly and stylishly renovated in recent years.
Asking €495,000
Agent Spencer Auctioneers

This sad dwelling is to be found on the back roads of most Irish counties but especially in parts of Leitrim, Clare and Roscommon where people walked out of cottages and never came back, or simply quietly died out. Decades of decay followed until eventually the house might end up on the books of Green Valley Property, a sympathetic agency that regularly advertises a “house-shaped pile of stone”. A roadside cottage at Kildearra, Bodyke, in Co Clare is typical – from its ivy-choked windows, wardrobe yawning open and an armchair still pulled up in front of the sooty fireplace.
Asking €35,000
Agent Green Valley Property

Money was tight in 1920s Ireland, but it didn’t stop the Free State government from building one of the most impressive affordable housing schemes in Marino, Dublin 3, on the former estate lands of the Earl of Charlemont. Around 1,300 houses were built using a proportion of immigrant German builders at a cost of around £657 each. The scheme centred on a large circular “green”, Marino Park. with adjoining symmetrical green areas. Marino houses are highly sought after with just a handful for sale at any given time. Number 37 Marino Green, a refurbished three-bedroom home overlooking a large communal green and with its own long narrow back garden, is new to the market.
Asking €495,000
Agent Gallagher Quigley

Inside men discussed land, politics and sport. Outside kids sat in cars for the afternoon fortified with packets of crisps and bottles of lemonade. It was a time when it was okay to have a few swift ones between Mass and Sunday lunch or let the car do the driving after closing time. No more. Roadside pubs are having to reinvent themselves and every second customer better be a designated driver. At Threemilehouse village near Monaghan town the The Three Mile Inn has a prime location opposite the GAA pitch and a freshly renovated interior that includes a pool room and a three-bedroom home over head. There’s a beer garden and plenty of parking too.
Asking €175,000
Agent Sherry FitzGerald Gallagher

The thatched cottage, with its whitewashed walls and red half-door, is as Irish as shamrocks and Guinness, and some of the prettiest can be found in the sunny southeast where they have a better chance of staying dry. The tradition of thatching goes back thousands of years, and to this day thatchers are kept busy during the fine weather, repairing old roofs and creating new ones for which home owners can seek a government grant. This three-bedroom home near Camolin, Wexford, has been renovated and rewired and sits on half an acre.
Asking €175,000
Agent Kinsella Estates

Developed for Anglo Irish aristocrats who would spend part of the year in Dublin, the capital’s Georgian squares rose up in the late 1700s, only to decline again after the 1800 Act of Union moved the centre of influence to London. Later the grand homes were converted to offices, consulting rooms or institutional use and, more recently, back to trophy townhouses for wealthy individuals who don’t mind a lot of stairs. Number 62 Fitzwilliam Square, a five-storey building, awaits such a conversion, and has many of it original features intact, including a garden. But it will take deep pockets to restore, and so the five-storey building overlooking the square’s private garden could well continue as a commercial venture.
Asking POA
Agent Knight Frank

Not everyone appreciated the quaint Irish cottage of old, particularly not architect and Fianna Fáil member Jack Fitzsimons, who published the blueprints for a new kind of home in the form of a 1971 book called Bungalow Bliss. It was an instant hit, and his long low homes with tarmac gardens sprouted all over rural Ireland to the dismay of conservationists. “Bungalow blight,” declared writer Joe Joyce in this paper in 1981. “If this was Éamon de Valera’s dream of a country ‘bright with cosy homesteads’, it has turned into a nightmare.” Still, the bungalow endures, and is replicated as with this 20-year-old home called Driftwood, in a stunning Connemara sea-front location.
Asking €495,000
Agent Matt O’Sullivan

One of the best employers in the history of the State, Guinness not only provided its workers with stable employment, an allowance of stout and sports facilities on tap, but it also built them houses. Commissioned by Lord Iveagh in 1926, Iveagh Gardens in Crumlin was a scheme of 136 houses with brick and stone details, nice internal features and individual gardens big enough to grow veg in. On view this weekend is Number 75 Iveagh Gardens, a modernised three-bed with a converted attic.
Asking €450,000
Agent DNG

Endured by low-ranking civil servants, students and anyone else on a tenuous income, these typically occupied a big draughty house in the inner suburbs. Reliable features included damp carpets, Press Button A wall phones and coin-fed electricity boxes. The classic redbrick warrens are classed as “Pre-63s”, which means that the property had been continuously let out since 1963, prior to building regulations being issued. This made them highly sought after by investors, who could make a tidy income by letting out every single room without any pesky interference from a health and safety angle. New regulations mean that rental units must be upgraded to include bathrooms, and so the new owner of this classic Rathmines Pre ’63 at 21 Grove Park in Rathmines will have some work to do to bring it up to regulation standard. Yet the annual income of just over €100,000 will surely be encouraging.
Asking €999,000
Agent Castle Estate Agents

In the boom years between 1995 and 2007 investors roamed the capital like wildebeest, snapping up apartments on 110 per cent mortgages and boasting about their portfolios. Docklands units were hot property despite their edgy location and bone-chilling winds whipping up from the sea. Some proved a good investment, like Hanover Quay, a solid trio of blocks fronting the Grand Canal Basin where buyers got themselves spacious rooms, a sunny orientation and decent balconies with water views, as well as solid rental prospects. Number 26, a sixth-floor unit, has hardly dated, and would still be considered a blue chip investment.
Asking €660,000
Agent Owen Reilly

Hilary Fannin: What I wish my spouse and I had done the morning of our wedding
9