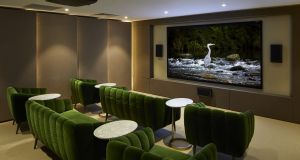 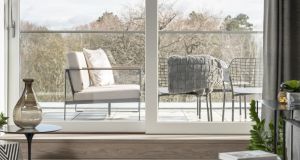 View of the terrace in show penthouse in Marianella. 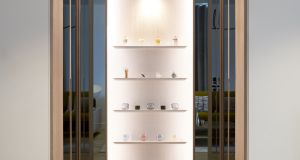 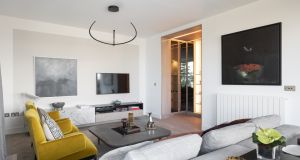 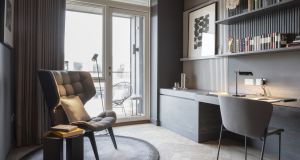 Third bedroom in show penthouse fitted out as a home office, with access to balcony. 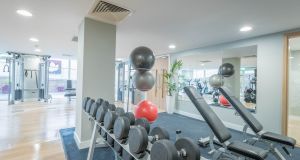 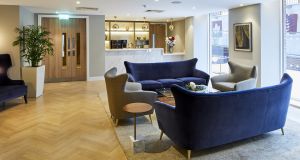 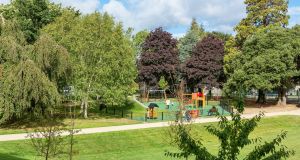 The playground at Marianella. 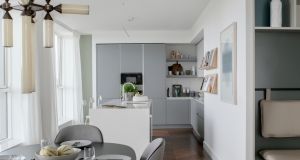 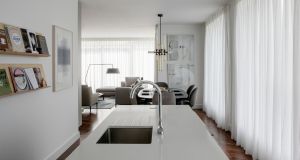 As it transpires, the playground in Marianella is less used by the residents’ children than by their grandchildren. The Rathgar development, fronting on to Orwell Road, has proved a magnet for upmarket downsizers, with the vast majority of the apartments bought by retirement-age buyers moving from houses within about a 1km radius of the scheme.

Families have bought into the strip of 12 three-storey townhouses on the site (two remain unsold) but for the 210 apartments spread over three five-storey blocks, the demographic is determinedly older.

The pent-up demand from downsizers for premium apartments in the leafy southside neighbourhood was clear from the beginning. In June 2017 the public launch of the first 100 apartments was deferred when 85 of the mainly two-bed units – priced from €600,000 – sold before going on the open market. And while that price point made Marianella one of the most expensive apartment schemes in the capital, it didn’t prove a barrier for the suburban buyers who were typically downsizing from family houses that often sold for well north of €1 million.

It’s not clear whether Cairn Homes had spotted such a hungry gap in the market when in the planning stage for Marianella, but the developers – currently building on the former RTÉ lands in Donnybrook – put in leisure amenities that have proven to have strong appeal for older downsizers.

In one block, adjacent to the underground car park, there’s the Marianella Clubhouse. Reminiscent of an upmarket spa hotel it features a small private cinema, a sauna and steam room and a large lounge with smart modern sofas, a giant TV, newspapers delivered daily, and coffee-making facilities. The residents, now newly settled in, are starting to use the clubhouse as a meeting area and relaxing communal space. A small, weekly bridge club has already formed and the room has proven popular for communal sports watching.

In the well-equipped gym the full-time on-site trainer now holds two mobility classes a week. There’s a meeting room that can be booked online. A uniformed concierge on duty from early morning greets residents – and can take in deliveries – while there is 24-hour security. On Saturday a resident, reading the paper while waiting for her grandchildren who were in the cinema for the afternoon, says that proximity to Rathgar village was a draw – as was the number 14 bus stop across from the entrance.

This top tier level of amenities – and the manicured grounds (the development’s park is open to the public) – doesn’t come cheap. Annual service charges for residents are based on the number of bedrooms, not the size of the apartment, and range from €3,454 for two-bed units to €4,318 for three beds.

The final phase of Marianella launches this week with eight penthouses coming on the market. The showstopper is the three-bedroom (1,636sq ft / 152sq m) show penthouse at the rear of the development overlooking St Luke’s Hospital with views that stretch over the rooftops and trees to the Poolbeg stacks. It features a vast open-plan living, kitchen and dining area with a wraparound terrace and fully glazed walls while the three bedrooms open out on to another terrace.

The master bedroom is laid out as a suite – with a fitted-out dressing area and a full-sized bathroom. In the show penthouse as designed by Paul Maguire from Cairn’s design team, one of the bedrooms has been fitted out as a home office – which is probably how the owners who in all likelihood won’t need three bedrooms will end up using the space. There’s a utility room, and good storage. It is priced at €1.25 million.

Cairn is not quite finished with the Marianella site. Having originally been granted permission for 22 townhouses at the far end of the site, it is now seeking to build 107 apartments across two blocks instead. They would have separate access from the main Marianella development out on to Orwell Road – a move that has been opposed by local residents concerned about density.

The joint selling agents are Hooke & MacDonald and Knight Frank and the show penthouse is on open view from today.