Tiny homes in the wild: Who’s behind the pod explosion? 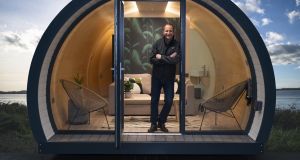 Further Space’s Peter Farquharson in one of the company’s pods. One of the most architecturally adventurous structures on the market is the recently launched Fuselage. 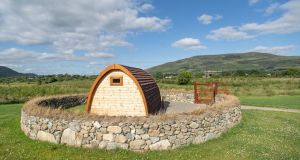 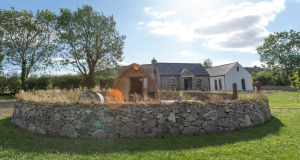 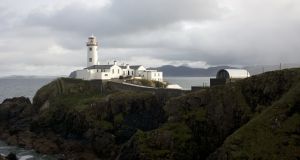 Pod home on the grounds of Fanad Lighthouse. 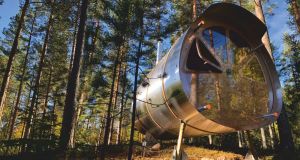 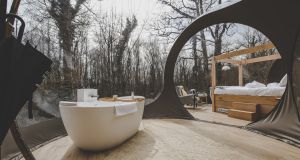 Inside an air-inflated dome pod at Finn Lough resort, outside Enniskillen in Co Fermanagh. 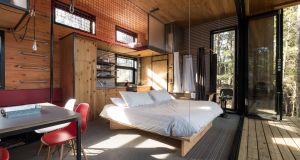 There is nothing like the simple pleasure of pitching a tent in the garden and setting up temporary house. But if you need creature comforts, the pod – a permanent and insulated structure – offers something far more architecturally interesting. The fancier models even have toilet, washing and cooking facilities in situ.

The allure is simple. Pods allow us to pretend we’re roughing it but to carry on camping in style. It’s a slick structure that you can install in your back garden but their appeal is, increasingly, as a place to get away to, to experience, if only for a few days, the splendid isolation of much of the nation’s gorgeous countryside.

David Griffin of Pods Ireland cottoned onto this trend a decade ago when he was let go from his job during the recession. An outdoor activist who likes to kayak, kite surf, run and mountain climb he saw a gap in the market for wilderness accommodation, especially along Ireland’s coast.

He set up the business in 2011 and his timber pods are manufactured under licence at Sisco Wodframe Homes in north Kerry using slow-grown Scandinavian pine, have larch windows and doors, and feature galvanised steel tile roofs that look like wood shingle but are far better able to withstand Ireland’s damp conditions. “They resemble an upside-down boat,” he explains.

The average size of the units is about 15 sq m and while he sells them privately, the bulk of his business is eco tourism. He has more than 70 scattered in caravan parks and on private farmlands throughout the country. His 24th site, at Morristown Castle Strand in Co Wexford, is due to open next month.

He’s now building 20-30 pods a year at a cost per unit that varies from about €15,000 for a basic insulated design wired for heat and light to €26,000 for one that also includes washing, toilet and basic cooking facilities. If you fancy experiencing one he suggests Ardmore Glamping in Co Waterford, Belmullet Coastguard Station on Claggan Island, Co Mayo and Tóg Go Bog é, in Millstreet, Co Cork as some of the most scenic locations.

Co Donegal has become a hotbed of pod activity with Lorcan Roarty, founder of The Wild Atlantic Camp in the sleepy village of Creeslough, expanding his camp offer of timber pods and canvas bell tents by building what he calls glamping villas.

These six new super-luxe spaces are super modernist in feel. Measuring just a neat 19sq m in size, each has a curved roof that covers a deck area where you can sit outdoors and remain sheltered from the rain. Inside, each will have a kitchen, toilet and wet-room facilities and can sleep up to five; with a double bed and pull-out trundle bed below and a two further sofa beds set on a mezzanine level above, accessed via a ladder, part of a design by Roarty, architect Michael Friel and Letterkenny-based interior designer Anne Deasy of Room Junkie.

The site’s success owes much to the facilities on offer. More than just a bed for the night it includes tennis courts, an astro-turf football pitch, a playground for smaller kids, a 9-hole pitch and putt.

Roarty is hoping to have the pods ready for Easter and will be charging €300 for a three-day weekend, from Friday to Monday, or on a four-day mid-week basis from Monday to Friday, also €300.

At Finn Lough resort, outside Enniskillen in Co Fermanagh, a collection of air-inflated dome pods have been so successful that the company is working to roll out to international markets with investor support. It has plans to launch in Australia at the eco friendly Daylesford resort outside Melbourne, and is also looking at sites in the US.

If a dome is something you fancy in the back garden, its manufacturing partner, Dome Experience, sells them direct with prices starting from €17,000 rising upwards for a fit-out similar to its offering, which includes custom bathrooms, four-poster beds and bespoke furniture, made by local craftspeople. But before you buy why not try the experience? Prices start from about €285 for mid-week stays in March.

One of the most architecturally adventurous structures on the market is the recently launched Fuselage, a UK design of 15sq m that is tubular in shape, its aluminium exterior reflecting its surroundings so that while almost space age-looking, it will fit right into its surroundings.

The precision engineered wood and alu-clad frame comes in flat-pack form and can, the firm says, be constructed in 4½ days. The interior includes marine ply floors and birch ply walls, a table suspended by ropes that can be dropped to fit flush with the bench seating to become a double bed platform. There are also bunk beds and the mattresses to sleep four are included in the price. Ex delivery from its UK-based manufacturer Tree Tents, the basic model costs about €30,000, and while this offers communing with nature in a very sleek fashion it does not include any facilities for when nature calls. A link unit, accessed by a covered timber deck, that includes a compostable toilet and shower, that you will have to get water access to, will cost an additional €10,100.

The Fuselage has not yet landed in Ireland so if you want to try them out, the closest models are at Hedgehog Hall, Herefordshire, where the pods have been timber clad or at Lypiatt Hill, Stroud, UK where its pod is due to open this summer.

There are several companies tapping into this micro tourism trend, partnering with investors to work with either landowners or local eco tourism outfits to offer accommodation in scenic locations. “In this market there is a trend towards more luxurious accommodation in more isolated locations,” explains Guillame Pellerin of Zoobox Ireland, a company with Canadian origins that first installed pods at Mont Orford National Park, Quebec and now has sites under construction in Cameroon and Magadascar and operate on a joint-venture basis.

In Ireland it has five sites under planning, each on 10-20 acres with five to 15 pods per site. In addition to property investors, it has gone into business with an outdoor activity operator, an organic farmer and a pub owner. The sites planned are in Connemara, near Dingle, west Cork, Wexford and Lahinch, where the surf culture will be referenced in the firm’s plans to upholster sofas in old wetsuits.

In another Zoobox pod, if you were so inclined, you will be able to climb onto a hamster wheel-style set-up that generates electricity that you can give back to the grid – an amendment to its original iteration. It was originally designed to run the TV and/ the popcorn machine but, not surprisingly, research showed that vacationers didn’t want to have to go to such lengths while on holiday.

The pods will offer everything a holiday let offers: a kitchen, hot showers and a compostable toilet. It will be next summer, 2020, before you can overnight in any here and a one-night stay will cost about€200-€250 in units that sleep up to six people, he estimates.

Further Space is a Belfast-based pod firm that is seeking landowners in scenic locations to partner. The start-up firm aims to establish up to 100 micro tourism business partnerships throughout the UK and Ireland and has already secured its first contracted partnerships. Its target is to drop 500 pods in hand-picked locations over the next five years, including 200 in Ireland, with landowners seeking to maximise the potential of their land through tourism.

Run by Peter Farquharson and David Maxwell, the pods can be dropped into sites where landowners will already have gotten planning for the required infrastructure to accommodate the pods such as access, water and electricity. Farquharson estimates that these costs could run up to about€20,000. Once the site is ready, Further Space supplies the pods and it retains ownership of them. The landowner then runs it as a tourism business, sharing the proceeds with Further Space. The firm will need to budget for rental administration and cleaning costs of about 25 per cent.

The pods have a curved exterior made of powder-coated aluminium that includes a rain porch. Inside there are matt-lacquered birch ply walls and recessed LED lighting. The units can accommodate up to four people, two in the Murphy-style wall bed that pulls down over the sofa to offer a double bed with accommodation for two more in bunk beds to the rear. These units have a fully functioning shower room with full-height shower and flushing toilet. The first of its eight projects in planning across the island of Ireland is at Glenarm Castle, in the Glens of Antrim, and will be operational by the end of June. You can make a booking in any of its five pods by the end of May.