Ranelagh redbrick with slight room for improvement for €995k

Owners of 4 Florence terrace bought at the right time, renovating and extending it 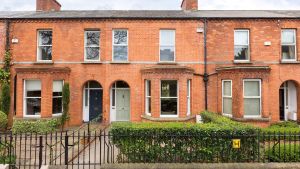 The market continues to demonstrate that those buyers who were in a position to pounce when house prices fell from their boom peak now find themselves in a comfortable position. Number 4 Florence Terrace, on Leeson Park Avenue, last sold in late 2013 for €400,000. It is back on the market now, for sale through Lisney for just short of €1 million at €995,000.

Florence Terrace takes up half of one side of Leeson Park Avenue, off Appian Way; the popular, well-located road, within easy walking distance of Ranelagh and the city centre, is a cul-de-sac.

The redbrick property has in the intervening years been renovated and extended by its current owners. A small addition to the rear to make space for an eat-in kitchen has brought the size of the three-bedroom terraced house to 118sq m (1,270sq ft).

The work downstairs did not change the turn-of-the-last-century layout. At hall level there are two interconnecting reception rooms, the front with a bay window and both with cast-iron and tiled fireplaces. The original floorboards have been stained and polished. To the rear of the house, where there would have been a small scullery, is now a bright kitchen and dining area opening out to the patio garden.

A small pedestrian lane that looks little-used runs to the rear of Florence Terrace and there is a gate opening from number 4’s rear garden out onto it. The small patio is low-maintenance, having been finished with cobblelock paving and lined with brick raised beds. To the front is a railed garden and parking is on-street.

While the work modernised the property, there may be some room for improvement – particularly in energy efficiency, as the BER is a D1.

At the busy open viewing on Saturday, the viewers appeared to fall into three camps: young couples flitting between viewings (there were several on Saturday morning within striking distance); older couples, who were perhaps from nearby, in the market for a well-located modernised downsizer property without a large garden to worry about; and, of course, other neighbours having a quick look.