Labour of love in leafiest Sandymount for €1.05m 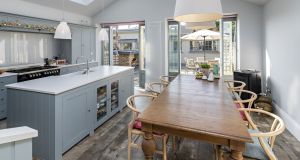 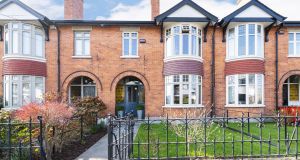 14 Wilfield Road is a good-sized three-bed family home that extends to 1,500sq ft 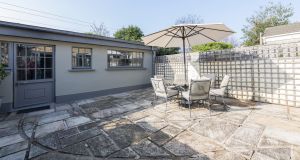 Wilfield Road is the very essence of Sandymount; a leafy, well-established road of 1930s houses that begins at the Dart station and ends at some of the area’s best playing fields. It’s a byword for the suburb’s accessibility, facilities and liveability.

Number 14 Wilfield Road, as well as its location advantage, has been tastefully modernised, is in walk-in condition, and has rear vehicular access and parking – a definite plus in a home this close to town. The Dart track running close to the end of the rear garden adds a certain appeal.

Bought in 1995, vendor Mary Jane says number 14 has been a “lovely family home for 18 years but with the children gone it is too big for me”.

“Time for a new adventure. It was liveable from the very beginning but we kept chipping away at improvements through the years. We put on a new roof, installed heating, a stove in the front room, pellet stove in the kitchen, a new bathroom and guest WC, converted the attic, worked on the kitchen. I’m interested in décor so concentrated on that.”

This is a modest acknowledgement. Mary Jane’s decorating style is coolly tasteful and gallantly faithful to number 14’s 1930s origins and features. Colours are muted – greys, whites and shades of taupe. Space throughout is put to use. New windows have an art deco style, old windows are retained and light encouraged everywhere. Curtains are Thai silk, woodwork is white.

The large kitchen/dining/breakfastroom extension, stepped lower than the front of the house, embodies all of this. A peaked, glass ceiling is some 3.3m (11ft) high. French windows open from both kitchen and dining areas to a paved patio/garden, Silestone trimmings match an eye-catching Silestone centre isle and a wood effect floor is in fact porcelain tiles. The dining area is large enough to fit an eight-plus dining table.

This is a good-sized house with a floor area of 140sq m (1,500sq ft), three bedrooms, traditional interconnecting sitting and diningrooms, a large rear extension, impressive attic conversion and rear block shed/garage ready for conversion to a studio or home office. Number 14 cost some (IR)£110,000 in 1995; agent Quillsen is seeking €1.05 million.

In the traditional front part of the house, bay windows give interest and light to the ground-floor sittingroom and, above it, to a front-facing bedroom. The sitting room has original timber flooring, picture rail, centre rose, cornicing and a sandstone mantel around a wood-burning stove. A rear, second diningroom has similar features as well as an original, 1930s fireplace.

A dado rail follows the stairs up to three bedrooms, all with picture rails and feature details. The converted attic, with two dormer windows, is made even brighter by a glass wall and door on to a dormer-lit landing.

BRCA1: ‘I’m lucky that I have the chance to take preventative measures’
7

Irish woman in San Francisco: Life is quiet but everyone is exercising
9