‘E-cigarettes cannot be simply categorized as either beneficial or harmful’ 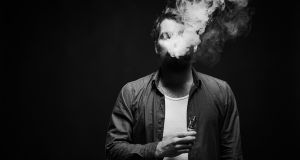 An American panel of public health experts have concluded that vaping with e-cigarettes that contain nicotine can be addictive and that teenagers who use the devices may be at higher risk of smoking.

Whether teenage use of e-cigarettes leads to conventional smoking has been intensely debated in Ireland, the United States and elsewhere. While the industry argues that vaping is not a steppingstone to conventional cigarettes or addiction, some anti-smoking advocates contend that young people become hooked on nicotine, and are enticed to cancer-causing tobacco-based cigarettes over time.

The new report by the National Academies of Sciences, Engineering and Medicine is the most comprehensive analysis of existing research on e-cigarettes. The report also cited conclusive proof that the devices are safer than traditional smoking products and may help smokers quit, citing conclusive proof that switching can reduce smokers’ exposure to deadly tar, dangerous chemicals and other carcinogens.

But it stopped short of declaring that e-cigarettes are safe, noting that there are no long-term scientific studies of the devices’ addictive potential or their effects on the heart, lungs or on reproduction.

The panel found evidence among studies it reviewed that vaping may prompt teenagers or young adults to try regular cigarettes, putting them at higher risk for addiction, but that any significant linkage between e-cigarettes and long-term smoking has not been established. It said it was unable to determine whether young people were just trying cigarettes or becoming habitual smokers.

“When it got down to answering the questions about what the impacts on health are, there is still a lot to be learned,” said David Eaton, of the University of Washington, who led the committee that reviewed existing research and issued the report. “E-cigarettes cannot be simply categorized as either beneficial or harmful.”

The report was commissioned in 2016, after the US Food and Drug Administration gained the authority to regulate tobacco products that had previously been outside its jurisdiction, such as e-cigarettes and cigars.

Mitch Zeller, head of the agency’s tobacco division, said the committee was assigned to assess the existing science, and to point out gaps in research. The report will aid the agency in its review of applications for lower-risk tobacco products and the potential harm or benefits those pose to individuals and the public.

On Wednesday, an FDA advisory panel will review an application from Philip Morris International for iQOS, an electronic device that unlike e-cigarettes, contains tobacco in a stick that the company says heats it but does not burn it. It releases nicotine vapor, which the company says is less hazardous than smoke. If approved, it would be the first company allowed by the government to claim its product is less harmful than cigarettes.

On Friday, the agency’s new nicotine steering committee will hold a public hearing on over-the-counter therapeutic products, among them gums, patches and lozenges, designed to help smokers quit.

Cessation was one area where the committee’s report did give the booming e-cigarette industry some good news. It pointed out the benefits for smokers trying to quit. But people who continue to smoke cigarettes, alternating with e-cigarettes, do not gain the same health benefits, the committee said. That is especially important given that most adults who vape also still smoke or use other tobacco products. The report also said the evidence was limited on whether e-cigarettes were effective for quitting smoking.

Last year, the Health and Information and Quality Authority (Hiqa) said smokers should not rely on e-cigarettes to give up the habit due to a lack of evidence that they effectively help people to quit.

One in five deaths in Ireland every year is due to tobacco smoke and the State spends more than €40 million annually encouraging smokers to quit. Currently, 17.6 per cent of the population of Ireland are smokers, down from 24 per cent in 2007. The average price of a packet of 20 cigarettes is now €12.

Smoking rates have also declined in the US. In 2015, the last year for which the Centers for Disease Control and Prevention has statistics, 15 percent of adults smoked cigarettes. The number has declined from nearly 21 percent of adults in 2005; and 42 percent in 1965.

With that decline, the e-cigarette industry has emerged as a potential substitute and Big Tobacco has been among the device developers enjoying new profits from the tobacco alternatives.

The new report reflects the complexity of the issues surrounding e-cigarettes and the balancing act tobacco regulators face over the pros and cons of the many alternatives to conventional cigarettes.

Adam Leventhal, a professor of preventive medicine at the University of Southern California, and an author of the report, said his group did an exhaustive literature search, reviewing all studies on youths and e-cigarette use from around the world. Of those, 10 studies were deemed strong enough to address the question. But they did not show that using e-cigarettes caused teens to move on to tobacco, only that the use of e-cigarettes was associated with later smoking of at least one traditional cigarette. The report noted that more than 11 percent of all high school students had reported using e-cigarettes within the past month, a total of nearly 1.7 million youths.

“The evidence was substantial that this association was consistent across a number of research methodologies, age ranges, locations, and research groups in and outside the US,” Leventhal said.

This conclusion is at odds with the findings of the British Royal College of Physicians, which asserts that e-cigarettes are not a gateway to smoking.

“Concerns about e-cigarettes helping to recruit a new generation of tobacco smokers through a gateway effect are, at least to date, unfounded,” the organization notes on its website.

More intriguing was the newest report’s finding of moderate evidence that youths who use e-cigarettes before trying tobacco are more likely to become more frequent and intense smokers.

Top-selling flavors  . . . include strawberries and cream; strawberry, apple and peach; and blueberries and pastry

Critics have long contended that the flavored liquids for the devices are luring adolescents to the habit, at a time when nicotine is especially hazardous for their brain development. Three of the top-selling flavors at e-liquid.com, a large online retailer, include “Unicorn Milk” (strawberries and cream), “TNT” (strawberry, apple and peach) and “I Love Donuts” (blueberries and pastry).

The authors of the new report cite conclusive evidence that vaping can be addictive, and that exposure to nicotine from e-cigarettes is highly variable, depending on the characteristics of the device, as well as how it is used. They also cited conclusive proof that in addition to nicotine, most e-cigarettes also contain and emit numerous potentially toxic substances.

In terms of secondhand vapor, the committee said there was conclusive evidence that e-cigarette use increases airborne concentrations of particulate matter and nicotine indoors.

The report concluded that much of the current research on e-cigarettes is flawed, either in methodology or because of industry-financed bias. In addition, the levels of nicotine and other chemicals, including metals, vary in e-cigarettes from brand to brand, which has complicated some research findings.

“And for kids who initiate on e-cigarettes, there’s a great chance of intensive use of cigarettes. As the regulator, we’ve got to factor all that in,” Zeller said.

In July, the FDA delayed the deadline at least four years for e-cigarette companies to apply for agency approval to keep their products on the market, largely by showing some public health benefit. The agency did not postpone other aspects of its tobacco control program, including requirements for mandatory age and photo-ID checks to prevent illegal sales to minors and the banning of free samples.

Several major tobacco companies that produce e-cigarettes declined to comment on the report. Azim Chowdhury, a partner in the Keller and Heckman law firm, who represents some businesses and trade groups in the industry, said the report’s main conclusions were positive. “They indicate that there are substantial benefits for smokers to switch to vaping completely,” he said.

But public health advocates who objected to the July delay said this report gave them further concern.

“What the report demonstrates is that despite the popularity of e-cigarettes, little is known about their overall health effects, and there is wide variability from product to product,” said Matthew L. Myers, president of Campaign for Tobacco-Free Kids. “That makes the case even stronger for FDA regulation.”

The vaping industry was cautiously optimistic about the influence of the report. Gregory Conley, president of the American Vaping Association, a nonprofit that advocates for vapor products, said the findings were consistent with those reached by the Royal College of Physicians and other institutions in Britain that have issued reports indicating e-cigarettes are less dangerous than traditional smoking and help with cessation.

“In the wake of this report, it is more apparent than ever that true leadership is needed in public health to ensure that adult smokers have access to truthful information about the benefits of switching to smoke-free products,” he said.

As for the FDA, Gottlieb said the report would play a critical role.

“We need to put novel products like e-cigarettes through an appropriate series of regulatory gates to fully evaluate their risks and maximize their potential benefits,” he said.