I know about my dad’s affair, and now I’ve moved home again to save for a deposit 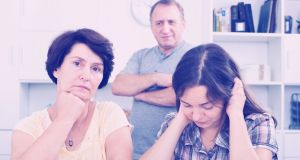 Question: I moved back home last year as I am trying to save for a deposit on a house and I’m beginning to crack under the strain.

I am the youngest of six and was at home on my own with my parents for some time so my older sisters and one brother do not know what is going on. The history behind my parent’s relationship is well known – my mother was in love and engaged from a young age but tragically her fiance died suddenly before they could get married. She later married my Dad, but everyone knew that he was her second choice.

My Dad had carried a torch for her since he was at school and my guess is that he was willing to accept any relationship my Mum offered him. I think it finally got to him (not being loved enough) though, as he began to have a relationship with a woman across the road when I was in secondary school. My parents used to fight a lot, but we all thought they were solid underneath it all and, even though my Mum could have known about this flirtation, she never challenged anything or said anything.

I found out about this and I think my father knows I know but we never say anything. The other woman also had kids in my school and it was awful carrying this secret. I left home and it felt so relieving to be away from it all, but now I am back and everything is continuing as it was and I feel demented.

If I tell my siblings, I think that there will be a huge row and I’m not really sure I want that either.

Answer: It seems that your parents have created a relationship where neither of them feel they are getting a fair shot at being loved or feeling secure. It is, of course, understandable that your mother suffered a huge loss but her choice of marrying someone she did not fully love is something that she must take responsibility for. Your father, it appears, has done the classic thing of having an affair with someone under his wife’s nose with the intention that she notices and perhaps fights for him.

It is perhaps a tragedy for him that your mother has not noticed and so his sense of rejection goes on. This does not excuse him from the deceit and betrayal that he is creating, but it seems that they are both responsible for this situation. That you are now living in the midst of this means that you have to decide whether to face up to the reality or do as both your parents have done and ignore what is going on and endure.

There is always a big question of whether we should divulge something that we know of someone else’s relationship, whether that be between friends or relatives, when we know it way well cause problems for all involved. The difficulty is a question of interfering in something that is not our business or of continuing to witness what we consider to be injustice and betrayal. You are living in and will probably continue to live in a situation that is becoming intolerable, but both of your parents seem (in your judgment) to be compliant in what is going on.

It would seem that you have a right to address the constant fighting and question the atmosphere at home but whether you force them to confront their relationship needs some consideration. It would be helpful if you did not feel so alone and I wonder if there is one sibling you might discuss this with. Is there something in your family were you all chose to ignore or avoid what is happening and if this is the case, then it would be beneficial for everyone to break this cycle and talk about the unspoken issues.

As someone living at home, you have a right to ask for a conversation about the atmosphere, but you must remember that you are a daughter and not a counsellor. The danger is that you have a stake in the outcome, but it is really your parents’ decision to face or resolve their relationship issues. However, all of you share responsibility for creating a life where deceit and evasion are commonplace and it is up to you to challenge this so that you will not bring it forward to the next generation. Begin by organising a house meeting and perhaps invite your chosen sibling also. Start by being honest yourself and say that you want to be upfront about what is bothering you and that you want honesty and courage from those you live with too.

It is unlikely that one house meeting will resolve a lot and so I suggest that you meet weekly for a period before reviewing how it is going.

It may take time and determination to break the family code of silence and endurance, but it is now in your capacity to challenge this.