Why are rich and famous men exposing themselves to women?

An aspect of this behaviour, though, that intrigues me is the absence of shame and embarrassment on the part of these guys 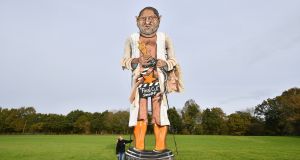 Reading recently about one of those episodes of rich and famous men exposing themselves to women, this thought occurred: Why do they need to do this?

Don’t some women throw themselves at them anyway because they’re rich and famous? Why go bothering those women who just want to get on with their work and go about their day?

The next thought that occurred was, maybe the assumption is wrong. Maybe women don’t actually queue up to throw themselves at movie stars and other celebrities. Maybe that’s why these guys think it’s necessary to engage in behaviours that would land so-called ordinary people in jail.

So the ongoing challenge to sexual harassment also challenges assumptions held by those of us who observe from a distance – well, by me specifically.

So why aren’t the rich and famous satisfied with that?

Does it come down to power, in the end, for some of these sexual harassers?

Women who want to sleep with them are expressing their own power to pursue what they want – where’s the fun in that for someone who gets a kick out of power over women?

But exposing oneself to a startled and upset production assistant, and getting away with it – that’s power. Or was until the fall of Harvey Weinstein.

An aspect of this behaviour, though, that intrigues me is the absence of shame and embarrassment on the part of these guys. Most of us, if we were in a bathrobe when a woman arrived, would run into the bedroom to get dressed before presenting ourselves. These guys stroll to the bedroom to get undressed before “presenting” themselves. Most of us, if we woke up the next day and realised we had done such a thing would curl up with embarrassment. We would be ashamed to face her next time we saw her.

It’s baffling. I was about to say it was as though they had never grown up – but actually that implies that people who have not grown up, young teenagers for instance, think this sort of behaviour is a good idea. On the contrary, I believe they would regard it as pathetic and disgusting.

Shame can be toxic, but some of the stories we’ve been reading in recent months suggest that a little shame is socially useful and discourages bad behaviour.

By the way, if I’m right about power as a motivator, then the real significance of the #MeToo movement doesn’t lie so much in its revelation of harassment as in its assertion of power by women who were seen as powerless.

I should add that what I’ve said above applies also in the case of men harassed by other men.

Mature in the subconscious

On a completely different topic, a reader took me to task in person over a recent column in which I cast aspersions on putting things off until the deadline looms. Procrastination allows ideas to mature in the subconscious, he asserted, and you shouldn’t force these things in the same way that you mustn’t open a flower bud before its time. Always wait for the fullness of time, he advised.

It’s a nice idea but I’m not sure I can agree. Every January, for instance, I put off looking for cheaper health insurance until it’s too late and I don’t think it has anything to do with waiting for the fullness of time.

Another example: Journalists, as I recall from my years in the trade, are unable to write until a deadline is on top of them. This applies whether they have three weeks or three days to produce their copy. They procrastinate. Yet, if, in the middle of a hectic news cycle, they are required to research and write 500 words in half an hour, they’ll do it and the results are usually pretty good.