Sibling bullying – what can a parent do? 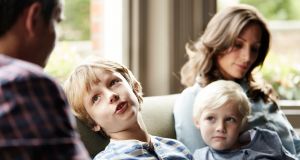 There are usually underlying issues that contribute to the problems

It is the dream of most parents that their children will develop good life-long relationships with each other. Indeed, one of the greatest satisfactions as a parent in later life is to see your adult children getting on well together and caring for one another.

The huge reader response to The Irish Times series on sibling bullying highlights how forming good sibling relationships can be far from easy and throws a spotlight on the many sad stories of people who continue to be badly affected by negative relationships with brothers and sisters throughout their lives.

As well as describing the damaging relationship with their sibling, many of the stories also describe upset and anger at parents who did not support them or who may have even colluded with the bullying. Parents reading these accounts will wonder what could have done in the face of such problems and will look at their own children’s fights and squabbles in a new light and wonder are these headed on the road to bullying and relationship problems.

In my own clinical practice, sibling conflicts, fights and bullying behaviours are among the most common problems I see in families and if not handled correctly they do have the potential to escalate and become long-term problems. Supporting your children’s relationships requires careful consideration from parents and it matters greatly how you respond when they get into conflicts.

Bullying behaviours such as physical intimidation, name calling, meanness, etc are common in most sibling relationships, but what matters is not their presence but how the children are held to account for their behaviour and how they are helped to repair the relationship afterwards

The two most common mistakes parents can make in reacting to bullying behaviours is to either not intervene at all (which can leave a hurt child feeling abandoned) or to intervene as a judge singling one child out for punishment (which can worsen the children’s ongoing relationship with each other).

My advice to parents is to intervene early in disputes and as soon as someone is getting hurt (emotionally or physically) but to always intervene on the side of both children – you are not a judge, but rather a mediator who wants to help them understand and sort out what is going on between them.

Practically, this might mean you sit down with the children and help them talk through the issues and what happened. You might help one child understand how hurtful name-calling can be and help the other child assert themselves better when upset. You want to help them both understand each other more.

Avoid labelling children as bullies or victims as this can fix children into certain self-expectations – if that is what their parents believe about them, then that is what they must be. Instead, name and challenge bullying behaviours as you see them. Frequently, there is a shared context to the behaviour, and then it best to challenge them together – “you should not be pulling your sister’s hair and you should not be calling your brother mean names”. Always focus children on the opposite positive behaviours you want to see “take a break from each other if you are getting annoyed” or “when you disagree, come and talk to me I will help you sort things out”.

If you judge one child is more an instigator of the bullying behaviour, it is best to talk to him/her alone about this. During these conversations, always try to understand the context first – “what was going on for you that you behaved that way” before helping him/her develop empathy for the sibling “you brother looks up to you, that is why he always wants to talk to you – it hurts him when you pick on him like that”. Then explore how he/he can ensure it won’t happen again and you can warn of a potential consequence if need be (eg if this keeps happening you are going to lose some of you tablet time).

There are usually underlying issues that contribute to the problems. For example, one child might find it hard to cope with arrival of a younger sibling who seems to gain all their parents attention and affection. Or another child might be struggling academically or socially and be acutely jealous of a sibling who appears more successful. With this understanding you can do a lot to help manage things. For example, with the arrival of a new sibling you can work hard at continuing to provide attention to the older child perhaps by including them in playtime with the baby, showing how they can be a great brother and help with bathtime and nappy changing, etc.

With a child struggling academically, you can work hard at helping them find their own niche in other areas that are unique to them and which don’t compete with their sibling. It is also possible to bridge the gap between the siblings and support them help one another. In one family I worked with, a breakthrough moment in the relationship between two brothers was when one realised how much the other was struggling socially in school and then took steps to protect and help him.

As a parent there is a lot you can do proactively to support your children’s relationship with each other. The goal is to help them enjoy each other’s company, find connections and shared interests and to teach them to help one another. One family I worked with, the youngest boy of three, was being excluded from the older two who were sporty and “as thick as thieves” in their friendship. Rather than letting this dynamic continue and fester, the mother changed some of the routines in the family. She arranged things that youngest attended a new music class with just his oldest brother and then set him up on a shared weekly chore with his middle brother (doing the shopping together followed by a reward).

Making these changes created more one-to-one times between the youngest and his two older brother and thus broke up the clique in the family and improved relationships all round.

Hugh Wallace: The day I stopped drinking changed my life
7