Cooking, cleaning and other housework are good for you 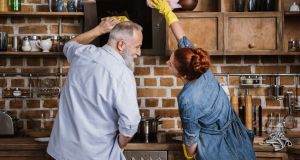 Elderly people who devote three hours a day or more to housework feel healthier than those who do less, according to new research.

A study of more than 35,000 adults in Europe and the US has revealed that tasks such as childcare and gardening had the biggest positive impact on health. And it found that women did an average of five hours of chores per day, compared to three done by men.

Previous research has revealed that the “double burden” of paid work and the uneven division of housework can make working-age women more vulnerable to depression and other mental health problems.

But now scientists at the Institute for Prevention Research and Epidemiology in Bremen, Germany, believe that post-retirement, housework can have similar benefits to a leisure activity.

Men spent less time cleaning, cooking and shopping than women – an average of 88.7 minutes a day compared to 217.9 minutes a day.

But women were found to spend less time on gardening and maintenance tasks than men, averaging just 38.5 minutes a day compared to 68.8 minutes a day.

The researchers found that the physical exertion involved in gardening and maintenance were beneficial to elderly people, while repetitive activities like cleaning, cooking and shopping provided similar benefits.

Retirees who undertook around 120 minutes per day of childcare duties such as caring for grandchildren were also more likely to report good health.

However, too much time spent with children started to have a negative impact. For example older people with custody of their grandchildren were more likely to report poor health.

The authors of the report wrote: “In our view, housework activities by the older population can be perceived as domestic leisure activities and forms of domestic physical activities rather than ‘work overload’, given a changed time availability after retirement.”

The study also found that sleep had a big impact on reported wellbeing, with elderly people who slept more or less than the recommended seven to eight hours a night more likely to report poor health.

This was most apparent in women, with those who did long hours of housework combined with too much or too little sleep reporting poorer health.

One of the report’s authors, Nicholas Adjei, doctoral researcher in public health, said: “The percentage of those aged 65 years and above is increasing globally due to higher life expectancy. It is important to understand how older adults spend their time in these later years and the possible positive and negative implications for their health.”

Ross O’Carroll-Kelly: ‘We’re having a fancy dress porty and I’m going as the wife of a philanderer’
4