Deep breaths, parents, but maybe video games and screen-time are not as bad as you think 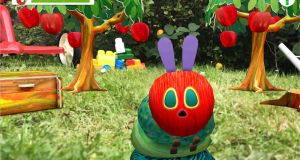 Every parent and teacher will know of “The Very Hungry Caterpillar” by Eric Carle.

Video games are becoming more and more educational, and screen-time may not be as bad as we once thought.

You are skeptical. That’s understandable. After all, video games have historically been the enemy of parenting since time began, causing more problems than solving them. But game-based learning, or GBL, is a learning method that has become one of the most popular learning methods in our schools today. Its aim is to make learning fun by turning traditional pen-to-paper lessons into engaging and creative tasks through the medium of playing games. No rote learning, no pen-to-paper tasks.

But as a teacher I can say confidently that GBL can already be found in almost every Irish classroom and more than likely on your child’s smart device or console. It’s time that parents, as educators, separate the stigma of screens and games and tap into a learning style that works.

Importance of GBL in the Irish classroom

The goal of GBL is more often than not a child doesn’t even realise what they’re doing is learning. They’re simply playing. GBL excels in the 3 Cs which are the foundation of today’s learning.

1) Confidence – Nothing knocks a child’s confidence more than a sheet covered with red Xs over sums, with little indication where they went wrong – the traditional way we see assessment. Children tackle games differently than pen-to-paper tasks. Firstly it’s less threatening, so children take more risks in problem-solving. There’s an element of “giving it a go” regardless of the child’s own perception of their ability. “But I’m no good at Maths” or “Reading is boring” statements are a thing of the past when the task is through a game. Children get less apprehensive and more motivated. After all, it’s only a game.

2) Collaboration – Children learn best from other children. And as a teacher, multi-player modes mean children can be grouped easily by ability, interests, peer groups and more under the guise of GBL. Children with different abilities can work seamlessly together on the same tasks, each one focusing on different skills that traditional teaching just simply would not accommodate. An example that I’ve used is the now legendary Carmen San Diego investigation games, a simple game that stands the test of time as educational software.

Tasked with tracking down the famous thief Carmen, one child in my class would practise their literacy skills reading the text aloud to the group. Another would chart their journey with an Atlas while another would practice writing and listening skills by recording all clues and facts in a log book. Everyone was working on different skills they needed to work on, but also collaborating together to solve a common problem.

3) Coding – Coding is now impossible to avoid in education. It integrates into every subject, and it seems is a requirement for nearly every job. And while it might be obvious on how making a game from scratch is educational, playing a game is just the other side of that very same coin. It goes hand-in-hand with GBL principles, except that children are now creating as well as playing games. Because testing their creations is part and parcel the fun.

With the introduction of formal coding classes and computer science in schools, it’s important to realise the relationship games have to developing simple and advanced coding skills.

Arguably the most popular in Irish schools, and for good reason; Scratch is free to use coding program that has a simple interface. By using lego-like blocks of code, children build step-by-step games, animations and more in a stress-free environment. What’s more is any creation can be shared for others to try around the world. Likewise, children can test out other children’s games too on the website. There is an offline mode too that let’s children code without internet connection, safe in the knowledge what is being made cannot be shared.

There are tutorials aplenty, allowing both children and parents to get started immediately in the action.

So games can be educational – but now the million-dollar question. How long is too long playing?

Sadly, no answer quite fits all in my opinion. But parents can find out how much screen-time is used productively. I remember one parent asking me during a parent-teacher meeting how to get their eight-year-old son off the PlayStation.

“Well what does he like to play?” I asked.

“Oh, um, Minecraft or something like that. But how do I get him off it?” she replied.

“And what does he like to build in Minecraft?”

“Build? What do you mean?” she asked, surprised my answer probably wasn’t to immediately cut the plug off.

Finding out about educational games is one of the first steps a parent can do in encouraging a new way of learning and should reassure that screen-time is being spent constructively.

Minecraft, as it turns out, is now one of thee most popular teaching tools taking over tech-savvy schools worldwide. It even has an Education Edition tailor-made for use in the classroom. It just so happened to be a video game, seen as some immediate waste.

How do I know if a game is even educational?

Common Sense Media is a great independent source for parents to tap into about educational games. There are lists upon lists, telling you which games are great for promoting diversity or female empowerment, teaching empathy or team work. All reviewed by fellow parents and children themselves with the goal of sharing GBL content.

“A game will never run out of patience with a kid practising something for the 100th time.”

Emmet O’Neill is the chief product officer at Touch Press, formerly StoryToys. They specialise in digital educational apps and games across a multitude of age groups. And as a parent himself, O’Neill feels that children are like sponges for knowledge and want to learn from everything around them all the time.

“Some of the most effective learning occurs when a child is enjoying themselves and not even realising that they are gaining new knowledge or skills” he says. “Kids today are also incredibly media literate and exposed on a daily basis to film, television and games of incredible quality. As a result of all of this a lot of traditional learning media can seem underwhelming or boring by comparison to what they enjoy as entertainment.”

“What we try to do is create play experiences for children that are at the quality level of the other media in their lives but where we have designed explicit learning goals into that content. If we are doing our jobs properly, the child should become absorbed in the experience and not even realise they are learning.”

The making of game-based learning

Every parent and teacher will know of The Very Hungry Caterpillar by Eric Carle. One little insect’s gluttonous journey has become the staple book in teaching literacy, maths and science in the Infant rooms.

But for O’Neill, making a digital translation of such a popular book was something that opened up new possibilities for learning content. “In our Very Hungry Caterpillar Play School app, children really enjoy playing with the caterpillar, and develop a personal connection with him while engaging in a variety of learning activities”.

That app in particular also encourages a lot of repetition, which is another key benefit of learning through games. A game will never run out of patience with a kid practising something for the hundredth time.

“They can learn at their own pace in a forgiving environment. Motivation and achievements are another aspect that can be a benefit of game-based learning, but ideally we try to make the play intrinsically rewarding itself.”

As a parent involved in the gaming industry, what advice would O’Neill have to parents interested in GBL? “I think one of the best things a parent can do is take the time to play alongside their kids” O’Neill advises. “Whether they are playing Minecraft, Fortnite or Fifa, you can sit with them and ask questions, maybe have a go. Even if it isn’t something that comes naturally to you, the interaction is worth a lot.