Order of Malta: ‘We’ve never lost an arm at the Ploughing’ 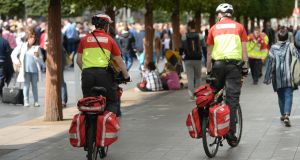 Order of Malta on bikes as they wait on Pope Francis to pass through O’Connell Street, Dublin. Photograph: Dara Mac Dónaill

It is 6am in the Phoenix Park and 76-year-old Tony Murray hopes for a glimpse of Pope Francis. The rain and the cold bounce off him. As a volunteer with the Order of Malta since he was just 10, Murray is used to providing medical assistance to members of the public in all weathers.

He was in the park for Pope John Paul II’s visit back in 1979 and says he has no doubt the 2018 papal mass – the biggest single day event for the voluntary emergency services in at least a decade – would run smoothly.

“There are more rules and regulations today and we have to be much more health and safety conscious. Back then, pilgrims were brought right up to the site of the Mass, but in 2018 they could expect to walk at least 3km.”

Last month, the Order of Malta, as well as the St John’s Ambulance, the Irish Red Cross and the Civil Defence, made the Croke Park Festival of Families, the Papal parade and the Phoenix Park Mass possible by providing crucial support to the statutory emergency services. This week, the Order of Malta is providing its services for the National Ploughing Championships (September 18th-20th).

It comes at the end of a long summer for the organisation, whose roots date back to 1099 when they first assisted pilgrims to the Holy Land, and they have operated in Ireland since 1938. Over the past few months, they have provided medical assistance to revelers at the Body & Soul music festival and at the Bray Air Festival, as well as being on site for numerous sports events, gigs at the 3Arena and the Hell & Back obstacle course run. They receive payment for these commercial events, which allows them to provide care in the community and fund their Share to Care holiday respite camp in Lisnakea, Co Fermanagh.

“The Papal Mass saw the normal set of long-distance injuries – slips, cuts and trips, exacerbated by the morning rain,” says Commander Aoife Clarke, assistant director of communications at the Order of Malta. “Our experience is that people can be more irritable and uncomfortable in the rain and it does make slips more likely, as well as making the long walk tougher to endure. During the parade, people came to us for minor bruises, trips and falls. Sometimes, people came to us because they feel generally unwell. Then there were people who had left their medications at the hotel and needed an emergency prescription, and we had doctors on site.”

Reassuringly, Clarke says they’ve never had to attend to anyone falling off a tractor or losing an arm in farm machinery at the Ploughing Championships.

The same set of medical incidents tend to reoccur at most events, but it’s at music festivals where the volunteer emergency services can have their work cut out, with problems arising due to drugs and alcohol. Unsurprisingly, this wasn’t an issue during the Papal visit.

Murray, a fully trained EMT, remembers the infamous Swedish House Mafia event in the Phoenix Park in 2012 where one man died and seven were stabbed. “Oh, I’d never seen anything like it,” he says. “It was chaos, and we were very busy.”

Almost all of those providing medical care are volunteers, albeit professionally trained volunteers. Doctors, nurses, advanced paramedics, paramedics, emergency medical technicians and first aid responders are among those who give up their time. The Order has just a handful of paid staff – even its administration team are mostly unpaid volunteers.

The Order has religious roots, but its volunteers are no more or less Catholic than the rest of the population. “Our member’s view on the church are as mixed as the rest of the population,” says one volunteer. “We have all religions and none, but we do this to give back to our community and because the Order of Malta is our family.” (Indeed, several of those involved in the Papal Mass were the second or third generation of their family to join the Order, and I meet at least one couple who met through the Order and are now married with children).

The youngest cadets are just 10 years old. “I’m a first aid responder now, but I want to be a paediatrician,” says 12-year-old Saoirse Graham. “I’ve loved been involved in the Order of Malta and making a difference in my community, and I’ve made so many new friends.”

Murray, one of their longest-serving volunteers, says he will stay with the Order as long as he can. “I was there to offer support after the Stardust event and helped bring the bodies out. There was no ‘debrief’ (to check that the medical responders were not traumatised) then and when I look back, I remember that we were dealing with very serious burns. We were called in after the 1974 Dublin bombings. I was there after the tragic Navan bus crash. And I’ll be here until I’m brought out in a coffin draped with the Order of Malta flag and medals.”

The Papal Mass: a logistical challenge

The Papal visit was the largest single event the Order of Malta had handled in well over a decade.

On each of the five days from the start of the World Meeting of Families through to the end of the Papal Mass, the teams met for a simulation and, at the end of each day or after any traumatic incident, there was a debriefing.

In the park, statutory regulations required the establishment of a temporary morgue in the event of deaths, while a temporary hospital was set up under the direction of Dr Patrick Plunkett, former professor of emergency medicine at St James’ Hospital. Media reports in the run-up to the mass suggested that, statistically, there could be up to eight deaths; there were none.

The medics had bikes with trauma kits which allowed them weave in and out through the crowds. The statutory emergency services worked closely with the four voluntary groups at the National Emergency Operations Centre in Tallaght.

More than 320 medics including first aid responders, paramedics and advanced paramedics, nurses and doctors came from throughout the island of Ireland to support the Dublin events, with an additional 170 supporting the mass at the Knock shrine. They volunteered for shifts of between 12-18 hours. They slept on people’s floors and in spare rooms; some slept on camp beds at the Order of Malta’s headquarters at Clyde Road in Ballsbridge, a majestic building where at least a few rooms smell distinctly like a hospital. Outside Dublin, volunteers still worked at sporting and cultural events throughout the country, including a major mountain bike race in Wicklow.

Jennifer Rock, The Skin Nerd: ‘I was motivated by people’s perceptions of me as a teenage mother’
9