Mark Wahlberg’s day: a 2.30am start, mega-workouts and cryotherapy

The actor manages prayer, a workout, two meals and golf before most of us wake up 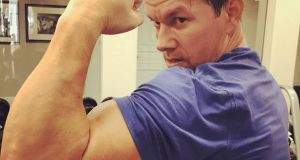 Gym bunny: Mark Wahlberg is battling to preserve the body that made him famous as a Calvin Klein model in his 20s. Photograph: Mark Wahlberg/Instagram

It’s easy to make fun of Mark Wahlberg, so let’s do it. The actor was asked by a fan on Instagram to detail his workout routine, but he went a lot further than that, giving a detailed breakdown of his 17-hour working (out) day. If we believe the schedule he posted (and I admit there is a tiny, cynical part of me that wonders whether this is all a publicity stunt), he gets up at 2.30am and spends the day in carefully timed segments in the gym, snacking, showering and, of course, praying, before going to bed at 7.30pm.

There are quite a few peculiarities in his daily routine: he has a shower at 6am that seems to last for an hour and a half; his 7.30am round of golf takes just half an hour, compared with the usual four hours (maybe he is playing crazy golf); at 9.30am he has an hour of cryotherapy, subjecting himself to blasts of ridiculously cold air (three minutes is the recommended limit or you get frostbite); and he has family time at 11am, when his four kids are at school (actually, that’s quite sensible).

It’s a far cry from the daily routine of Hunter S Thompson, which, as Alex von Tunzelmann reminds us, involved getting up at 3pm, drinking epic quantities of whiskey and coffee, snorting cocaine, dropping acid and watching pornographic movies in the hours after midnight when he was supposed to be writing.

Like Thompson (and here the comparison ends), Wahlberg does not say when he finds time for rehearsing, learning lines and all that other mundane stuff, but maybe his kind of movies don’t involve much dialogue. The buff body – he’s looking good at 47 – is everything. That is at the core of his insane daily routine: the battle to preserve the gloriously honed body that made him famous as a Calvin Klein model in his 20s. Sadly, he is, in the end, destined to lose that battle, which is where his Catholicism will come in useful when the muscles start to fail. Absolution before abs.

The grotesque thing is that impressionable young people hooked on Love Island will take such routines seriously. Soon everyone will want a cryo recovery chamber

Actors who were beautiful in their 20s have two options: fight to preserve your beauty, the Wahlberg way; or embrace the disintegration – let’s call it the Brando method (although maybe Marlon went a little too far). Our narcissistic culture has always preferred the former for women – hence all the diet fads and plastic surgery – and now that has spread to men, too, with actors such as Wahlberg taking the lead. The grotesque thing is that impressionable young people hooked on Love Island will take it seriously. No doubt soon everyone will want a cryo recovery chamber in their back garden.

Some reporters have called Wahlberg’s schedule “busy” and “jam-packed”. But to me it suggests someone with a short attention span who doesn’t have enough to do. Even successful actors tend to have a lot of time on their hands. It also calls to mind Donald Trump, with his obsessive tweeting and golfing (although with less gym time, obviously). Trump, like Wahlberg, needs to be weaned off narcissism and given something practical to do. Basket weaving, perhaps. Both might also benefit from having a lie-in occasionally. – Guardian

Irish abroad: Are you worried about when you can visit home again?
5