Under the Wire: Reporting the last days of Marie Colvin

Review: Chris Martin’s film honours its subject but is frustrating on many levels 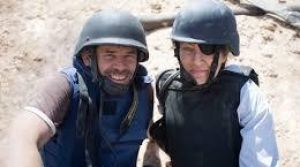 A scene from ‘Under the Wire’

Film Title: Under the Wire

Based on Paul Conroy’s memoir of the same name and bolstered by his likeable, hard-worn testimony, Under the Wire chronicles the last days of Sunday Times correspondent Marie Colvin.

Much of the documentary’s grainy footage dates to 2012, when Colvin and Conroy illegally entered Syria to report on the shelling of the Isis stronghold in Homs. Colvin, with her trademark eyepatch, had already garnered a reputation for going where other frontline journalists would never dare.

It’s a tribute to the storytelling skills of Conroy and various friends and colleagues – including Lindsey Hilsum and Syrian translator Wa’el – that Under the Wire maintains a gripping narrative despite the fact that most viewers will be aware of the outcome. Against the narration, there is murky, unintelligible footage to contend with. Save for the to-camera interviews, much of the film, with its dark, illicit tunnels and haggard reconstructions, is simply unwatchable.

There are bigger problems with context, or rather the lack of it. Under the Wire doesn’t do enough to tease out the politics of the Syrian conflict. Worse, it fails to profile either Colvin or Conroy with anything like enough depth. One keeps wondering how they got here, what makes them tick, if they were good at school, and what their families and friends were going through back home. Colvin’s no-nonsense personality is previewed in a few tantalising details, but doesn’t get the profiling she clearly deserves.

As the 2016 documentary Jim: The James Foley Story demonstrated, it’s possible to honour the journalist but lament the conditions with which they work. There are contradictions in details outlined by Colvin and her employer that seem to warrant further exploration. It’s commendable that Chris Martin’s film leaves one with more questions when leaving than when going in, but it can make for frustrating viewing.

Donald Trump: ‘You meet a woman. In one second, you know whether it’s going to happen’
Real news has value SUBSCRIBE