The action unfolds at breakneck speed, with thriller timing and nervy acting 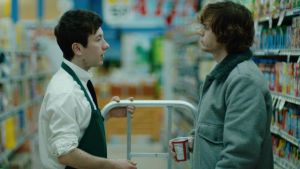 The British director Bart Layton came to prominence in 2012 with the award-winning documentary The Imposter, an intriguing account of a 1997 case in which French confidence trickster Frédéric Bourdin impersonated Nicholas Barclay, a Texas boy who disappeared at the age of 13 in 1994.

That film played around with conflicting accounts and faulty memory, as does his new film American Animals, a tricksy account of a heist which swerves between interviews with the older, wiser people portrayed in the movie and the events themselves performed by actors, without ever losing the breathless pace of a caper movie.

It’s a clever film even when its characters are the opposite. Who on earth goes to Amsterdam to meet a dodgy art-world fence played by Udo Kier? These guys do.

From the get-go, American Animals is defined by dumb ideas. Based on a botched 2004 robbery, Layton’s script concerns Spencer Reinhard (the brilliant Barry Keoghan), an art student with notions, and Warren Lipka (Evan Peters), a rebellious jock pal with no notion, and the mad scheme they cook up to steal a priceless edition of John James Audubon’s The Birds of America from the library of Transylvania University.

The pair are joined by two childhood chums – Erik Borsuk (Jared Abrahamson) and Chas Allen (Blake Jenner) – to carry out the robbery. They dress up like elderly businessmen, an idea which is no dafter than the rest of the plan. The effect is Beastie Boys video knockoff, not adequate disguise.

Throughout, and understandably, the real criminals contemplate their own idiocy and remorse.

American Animals can’t quite escape the shadow of bigger, better heist movies – the ones studied by the quartet – but the cutaway interviews make for an interesting diversion, the performances are suitably nervy, and the action unfolds at breakneck speed thanks to writer-director Layton’s thriller timing and the fleet, fancy footwork behind DP Ole Bratt Birkeland’s handheld camera.