Review: This quirky drama – Stanton’s last film – is really something to see 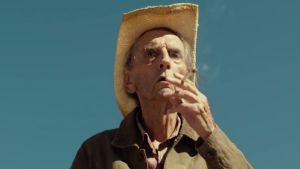 Harry Dean Stanton: His performance, like many of his best-loved turns, is as craggy as it is soulful

Lucky, a quirky drama in which the late Harry Dean Stanton contemplates the mortality of Harry Dean Stanton is really something to see. John Carroll Lynch’s film – a living wake populated by a fine cast of veteran character actors – follows the nonagenarian of the title as he goes about his final days.

Every morning, he exercises, drinks milk, puts on his cowboy clothes, sets off on his rounds. His routine involves doing a crossword puzzle at the local diner, purchasing more milk, smoking constantly and visiting the local bar, where he chats with the locals, especially Howard (David Lynch) whose missing tortoise provides the most satisfying story arc of the film.

Logan Sparks and Drago Sumonja’s daringly minimal screenplay stays out of the way of the leading man, who died last September, and lets him do his thing. His performance, like many of his best-loved turns, is as craggy as it is soulful. There are lovely memorable conversations, including reminiscences of the second World War between Lucky, a ship’s cook, and another veteran (Tom Skerritt). There’s a Spanish ballad crooned movingly at a Latin birthday party. A hug between Lucky and a waitress from the diner is as wonderful a thing as you’ll see all year.

There are odd diversions, too. An unexplained fainting spell, a red-lit premises near the bar and mysterious phone calls recall Stanton’s many collaborations with David Lynch.

This is no fluffy eulogy or hagiography. There are flashes of anger and discontentedness throughout. Every day, Lucky stands before a mysterious pit-stop to shout out an expletive. There’s an ongoing battle between the proprietor of the bar (Beth Grant) and her equivalent (Barry Shabaka Henley) at the diner about the enforcement of smoking regulations, a contest that ultimately provides the film with a marvellous visual coda.