The Nun: stupid, confusing and scary – but not sexy

Review: A likable cast is the only saving grace for this incoherent horror flick 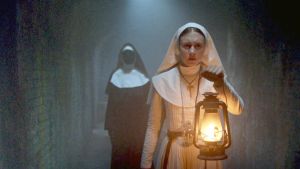 The Nun is trying to be like The Conjuring a falling at the hurdle. Photograph: Warner Bros

Alert the folks at the Pulitzer Prize. We have found the most sparkling dialogue of the cinematic year.

It is not so many decades ago that the Irish authorities would have either banned The Nun or chopped it down to the length of a public information film. Viewed in the aftermath of a sparsely intended Papal visit, Corin Hardy’s largely terrible – if unintentionally hilarious – horror romp offers the Church welcome confirmation that somebody still cares. The Roman faith has always had a place in horror. Fanged Nuns in particular. The Vatican can take further comfort from the news that, unlike so many sisters in macabre 1970s movies by our Italian brethren, these nuns are scary, but not sexy. (You’re reminded of the one who taught you geography I bet.)

Following a prologue referencing events in The Conjuring 2 – the one where Vera Farmiga investigated ghosts in Enfield – we are flung into a version of the 1950s swamped with pointers to spiritual imbalance. For starters, the great Mexican actor Demián Bichir is playing “Father Burke” and Michael Smiley, who couldn’t be more conspicuously Northern Irish if his face were made of potato bread, is playing “Bishop Pasquale”. Did the wrong scripts go in the wrong envelopes?

Anyway, the Bishop is among the Vatican officials who send Father Burke to Romania where, in the company of novitiate Sister Anne (Taissa Farmiga, sister of Vera) and a dishy French-Canadian farmer (Jonas Bloquet), he investigates apparent hauntings at a towering Monastery.

Alas, The Nun is more chaotic than most of the many, many films set in The Conjuring universe. To compare it to a ghost train would be to understate the narrative cohesion that habitually governs those seaside entertainments. Our heroes are forever falling down holes, turning into ghouls, getting buried alive and dodging huge undead serpents. The film-makers may as well have employed agents to slap viewers in the face with wet fish at unexpected moments.

The stupidity and lack of rigour – at one stage, Father Burke seems to be dictating Anne’s solemn vows from the Old Testament – doesn’t entirely undermine the gallant efforts of a likable cast. Bichir is charismatic. Bloquet is funny. Twenty years her sister’s junior and her absolute spit, Taissa Farmiga is funny, loopy and confident in the habits of the “Final Girl”. Does she grow up to become Vera’s character? I’m not sure and I’m sot sure if I’m supposed to know. All of which says something about the muddled storytelling.