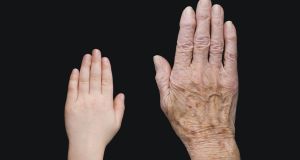 The painful reality: some 880 children were waiting to see a paediatric rheumatology consultant in December 2017. Photograph: iStock

Negative experiences in school are unfortunately quite common for children with juvenile idiopathic arthritis (JIA), according to Wendy Costello, chairperson of iCAN, the Irish Children’s Arthritis Network, due in part to the fact that it is an invisible disease.

Simple things like carrying a schoolbag or doing homework can be painful and arduous tasks for children with arthritis and many feel isolated and alone.

Ms Costello explains: “Some of our kids get texts from other children in their school saying ‘we saw you walking down to the shops last night and now you’re off sick again today’, they just don’t get it. Our children miss a lot of school.

“They need somebody to take notes for them which they don’t get and it’s a challenge to access services like SNAs [special needs assistants] and assistive technology. My own daughter Niamh did her Leaving Cert last year and was so exhausted she was in bed every evening at 8.30pm. She got through it but found it very hard and it has also been hard for her to hold on to friendships.”

There are currently 1,200 children and young people under 16 living with JIA – the commonest inflammatory disorder of childhood – in Ireland, according to Arthritis Ireland.

Brian Lynch, communications manager with Arthritis Ireland, explains that there are only two paediatric rheumatology consultants in Ireland, both at Our Lady’s Children’s Hospital, Crumlin, and plans to appoint a third consultant and supporting multidisciplinary team remain unfulfilled.

“The situation in Ireland is in complete contravention of international best practice and all expert advice, which is that patients with suspected juvenile idiopathic arthritis should be seen by a paediatric rheumatologist within six weeks of the referral being made,” Mr Lynch stated.

He explained that children living with JIA were living with joint pain, swelling and stiffness. Many presented when they a were between one and three years old, a crucial time of development and growth, and require specialist care within months of diagnosis so as to prevent permanent joint damage and growth retardation.

Ms Costello points out that there are also long waiting lists for steroid joint injections, and MRI scans to confirm the extent of damage to the joint.

“We successfully campaigned to have the two paediatric rheumatologists at Crumlin taken off the general register and we are now campaigning for a third consultant and multidisciplinary team at Crumlin. There are no local centres which means people from places like west Cork have to travel all the way to Dublin for routine appointments.”

iCAN helps parents, children and teenagers navigate life with JIA by providing information through their online support network, patient packs and information days as well as family days out.

For further information go to http://www.icanireland.ie, mail icanireland@gmail.com or call 086-8289817.

- Arthritis in children and young people under 16 is now called juvenile idiopathic arthritis, a group of illnesses which have been put under one name because they share similar symptoms.

- Arthritis means one or more joints are inflamed – swollen, painful and stiff.

- There is no known cause for JIA and it can begin at any age, but commonly shows up in younger children. Many types are more common in girls.

- Treatments are improving all the time. There is no cure for JIA but many children go into remission which means symptoms disappear, often forever.

- About three in five children with JIA have few or no physical problems as adults. For the remaining children, arthritis can unfortunately cause some longer-term problems and they may continue to need treatment to control their disease.

Read: Juvenile Idiopathic Arthritis: ‘if I had cancer, I would have more support’