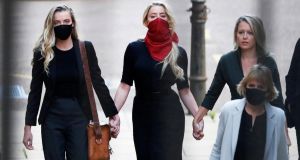 Johnny Depp libel trial: Amber Heard (centre) and her ex-husband have accused each other of assault and abuse. Photograph: Facundo Arrizabalaga/EPA

Certainly, the details emerging from the actor’s libel case against the Sun newspaper, after it claimed he was a “wife-beater”, have made for outrageous reading. A blockbuster screenwriter would barely have the gall to come up with evidence already heard in court during this case, from claims that Depp’s ex-wife Amber Heard, “or possibly one of her friends”, defecated in their marital bed to allegations that Depp joked, in texts to his fellow star Paul Bettany, “Let’s burn Amber” and “Let’s drown her before we burn her!!!” That message ended with an even more vile declaration.

With Depp and Heard accusing each other of assault and abuse – neither of them has been charged with either, and the star strongly rejects the Sun’s claims – a chaotic and horrifying picture of the pair’s two-year marriage is emerging.

In the same week, and in no less edifying scenes, Tom Meighan, the former frontman of the English band Kasabian, was ordered to do 200 hours of community service after pleading guilty to a drunken and “sustained” attack on his ex-fiancee, Vikki Ager.

Leicester magistrates’ court heard that Ager was hit in the face, shoved up against a cage, pushed over repeatedly, held by the throat and threatened with a wooden pallet during an assault on April 9th this year.

CCTV footage showed a drunken Meighan striking Ager and dragging her by the ankles into the back garden of their home, causing her multiple injuries. Ager’s child reportedly made an emergency call to police during the incident.

The court also heard that police had been called to Ager’s address before, and there was “evidence of previous abusive behaviour”. The judge, Nick Watson, told the singer, “I could have sent you to prison” for the incident; he sentenced Meighan to community service because of his good history and charity work. The judge also referred to letting down “band members, and those who love your music”. Was his fame or status a mitigating factor in this sentencing? It’s hard to know.

Kasabian announced on Monday that Meighan had left the band “by mutual consent”. Meighan tweeted in response: “I just wanted to let you all know that I am doing well. I’m in a really good place now. Thanks for all your love and support. I’ll be seeing you all very soon.” As thousands condemned his actions online, the #BeKind hashtag followed in hot pursuit.

There are problems with the way we have looked at past cases of domestic violence when celebrities have been, or have alleged to have been, involved. More often than not the media covers them amid a toxic cloud of glamour and salaciousness. Rihanna was bruised and had a black eye after her boyfriend at the time, Chris Brown, assaulted her at a Grammy Awards gala in 2009. After Bobby Brown was charged with battering his then wife, Whitney Houston, media outlets pored over details of alleged hard partying and infidelity within their marriage. (In 2018 Brown denied any violent incidents between them; when a reporter pointed out they were a matter of public record, Brown responded: “The public record is wrong.”)

In both instances, and possibly with help from Hollywood’s professional-reputation handlers, both men were able to rehabilitate their public images in time. In 2018 Bobby Brown announced plans to build a shelter for domestic-violence victims; Chris Brown was offered a platform to reflect on the incident in 2009 in a documentary, Chris Brown: Welcome to My Life.

The behaviour of high-profile perpetrators going unchecked in the justice system is one thing. Yet victims of domestic violence must surely pale when famous men use social media – or the mainstream media – to distance themselves from wrongdoing.

It all prompts the question of what sort of message these high-profile cases send to the wider public. Meighan tweeted again yesterday, to apologise. “I am very sorry and deeply regret my recent behaviour,” he wrote. “In no way am I trying to condone my actions or make excuses. I am completely to blame and accept all responsibility.”

The singer said he had “struggled for many years with alcohol addiction” and described the assault as “a wake-up call for me, for who I was, and what I was becoming”. He added: “I was spiralling out of control. My mental health was becoming more and more unstable and I was at breaking point.”

He also said he and Ager were “very much in love and we are looking forward to rebuilding our life together with the support of those close to us”. He described the incident as “an isolated one” and “completely out of character”.

There is no reason to believe Meighan’s apology was insincere. So does the reporting of his case, or any other, create a welcome visibility for perhaps the most insidious and misunderstood crime that there is? Or do court sentences perceived as lenient, as many believed Meighan’s to be, stop victims of domestic violence from coming forward, for fear that their own situation won’t be handled properly or sensitively by authorities?

Priscilla Grainger, a domestic-violence survivor who cofounded Stop Domestic Violence in Ireland with her daughter Ainie, says: “I wish we saw more high-profile cases in Irish courts, but they all happen in camera, behind closed doors. Any form of raising awareness of domestic violence, good or bad, helps a victim,” she adds. “It clarifies to them that they are not mad. They can say, ‘If it happened to someone famous, I’m not losing my mind.’ They can see the red flags, and recognise the signs.”

Sarah Benson, the head of Women’s Aid Ireland, says: “If someone is perceived as having a particularly high profile, the idea that you would be held to account and there would be professional and criminal consequences, irrespective of status and celebrity, gives the strong message that abuse is not acceptable.”

We hear countless times on our helpline, ‘Who will believe me? He’s a pillar of the community.’ It’s that old-fashioned idea of the street angel and house devil

In the noncelebrity realm, perceptions of power and status certainly play their part.

“We hear countless times on our helpline, ‘Who will believe me? He’s a pillar of the community.’ It’s that old-fashioned idea of the street angel and house devil. When everyone seems to love and respect them, that’s a deliberate tactic on the part of the perpetrator. A counternarrative to this is vital. Help and support are there for those being victimised. We will believe you, and you are not alone.”

Benson adds: “The message that is increasingly coming to the fore is that someone may be brilliant and talented but that doesn’t mean it gives them permission to behave in an abusive, criminal way. There are so many people in art or music or movies who are talented and simply do not lash out and hurt the person beside them.”

Grainger says: “In my opinion, perpetrators don’t change. In the case of [some celebrities] there’s a touch of arrogance there. They think they’re so well known, ‘They’re not going to touch me.’ They have their public-relations people to help them, but they rehabilitate on the outside. They don’t rehabilitate at home. To me it doesn’t matter if you’re famous or not: you will never truly rehabilitate if you’re a perpetrator of domestic violence.”

If you are affected by the issues in this article, you can contact the Women’s Aid 24-hour helpline on 1800-341900. Stop Domestic Violence in Ireland can be contacted at stopdomesticviolenceinireland@gmail.com

Paul Flynn: What I cook when I’m cooking for another chef
8

‘I’m going to ask you something,’ Sorcha goes, ‘Have you two been sleeping together?’
9