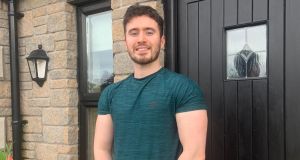 Andrew Kiernan: Having a full colectomy was ‘the best thing I’ve ever done. It gave me back my life.’

Andrew Kiernan believes the best way to address any stigma attached to having inflammatory bowel disease (IBD) is to talk about it openly.

“It’s better to be upfront with people and although you may lose some friends along the way, the best people will stick by you,” says the 25-year-old, from his lockdown home office in his parents’ house in Co Monaghan. Kiernan, who was diagnosed with ulcerative colitis in 2014, works in human resources for the Kerry Group in Naas, Co Kildare.

Kiernan was fit and healthy until he was 19, in fifth year in secondary school and playing football, with ambitions to play for his county. Then, in March 2014, he noticed blood in his stools. Within weeks, he was diagnosed with ulcerative colitis and put on maintenance drugs to control the condition. However, the bleeding continued and following his first year in college in Dublin, he was severely fatigued, had lost weight, was anaemic and fainting frequently.

“I spent seven and a half weeks in hospital, was infected with E.coli and had sepsis. I’m lucky to be alive,” he says, frankly. Following blood transfusions and biomedical chemotherapy, Kiernan was released from hospital back to student life.

IBD is used to describe several diseases, including Crohn’s disease and ulcerative colitis – which are both chronic (long-term) diseases that involve inflammation of the gastrointestinal tract (gut).

“Ulcerative colitis is an autoimmune disease so the white blood cells attacking the lining of my colon was causing the ulceration and bleeding,” explains Kiernan. For the next 18 months or so, he was put on a variety of immune-suppressant drugs to control the condition.

“I missed a lot of college. I had to re-sit some exams and I had to quit football which was the hardest thing of all,” he explains. In January 2017, Kiernan opted for a full colectomy, after which he was fitted for a ileostomy bag which takes the waste materials that usually pass through the colon [large intestine] and out of the body from the rectum.

“It was the best thing I’ve ever done. It gave me back my life. Within five months, I was playing football again and six months later, I went inter-railing across Europe with a group of friends. I was able to eat or drink what I liked,” explains Kiernan.

He says that after the surgery, his biggest fear was around relationships with girls. “I basically followed the ‘fake it till you make it’ rule and I’ve had no bad experiences. I’m with my girlfriend now for more than two years.”

However, his surgical procedure followed by recovery meant that he had to repeat third year and thus finished his BA in Education Studies at Marino Institute in May 2019. An internship during college with the Kerry Group led to his current position. Now, looking back over the past six years, he says, “A lot of people struggle mentally with having IBD but surgery transformed my life.

“The internet is a dangerous place for people to go for information. I’d advise people to talk to those who have had it and stick with those who are positive. In my case, having had to cope with this condition made me more resilient during the lockdown period.”

Stand-up comedian Andrea Farrell often uses her experience of inflammatory bowel disease for her comedy sketches. She was diagnosed with Crohn’s disease five years ago on her 26th birthday. She had been unwell for months. “Before my diagnosis, I thought that my symptoms – which mainly consisted of going to the toilet a lot and a mouth full of ulcers – were linked to food and my diet,” explains Farrell.

A vegetarian at the time, Farrell switched back to eating lots of red meat and then tried many other diets. “Before I was diagnosed, I had definitely developed some food anxieties. My friends thought I was a picky eater and knew I didn’t really like going out to dinner. I was afraid to eat because everything passed through me so fast that I just wanted it to stop.”

Her diagnosis came after a period of hospitalisation following swelling of her joints, blurred vision and extreme weight loss. “I had to leave my job at the time and stop performing comedy until I felt fit again. But, once I started to get better, I got a whole new lease of life. I now live mostly in remission and try to recognise the early signs of a flare-up [my eyes get bloodshot and I get hives on my shins]. During a flare-up, I also get severe joint pain and inflammation which, in the past, has meant I’ve had to use crutches until the swelling goes down. But, thankfully, this hasn’t happened for some time.”

Farrell advises anyone with IBD not to become desensitised to their symptoms and let them become normal. “It’s not normal to go to the toilet 15 times a day. It’s not normal to pass blood and lose weight at an alarming rate,” she says.

However, while diagnosis is scary and upsetting, Farrell says it also brings a sense of relief. “A diagnosis means you know what’s wrong with you and your journey to recovery can begin.”

Sufferers of inflammatory bowel disease (IBD) experience higher than usual levels of stress and anxiety, according to a new survey. Three out of four people living with Crohn’s disease and ulcerative colitis – conditions collectively known as IBD – experienced stress and anxiety, and over half of those surveyed said they were depressed due to their condition.

The Irish Society for Colitis and Crohn’s Disease (ISCC) reported a 300 per cent increase in calls to its helpline in the three months since the Covid-19 pandemic hit Ireland. Callers spoke about their concerns about cocooning, managing their mental health and accessing healthcare appointments.

In response, the ISCC launched (in partnership with Janssen Ireland) a podcast – Gutcast – in which experts and sufferers of IBD share their advice and experiences of the condition. The first three episodes are out this week, and each of the eight episodes focuses on a specific topic including managing everyday demands of work and social life, coping with fatigue and getting the most out of healthcare appointments.

About 40,000 people in Ireland suffer from IBD, most of whom are diagnosed between the ages of 15 and 35. Symptoms range from regular diarrhoea or constipation to cramping pains in the abdomen, loss of appetite, anaemia and ulcers in the mouth and digestive tract. Many sufferers end up taking sick leave from work, school or college, and parents with IBD often find caring for their children difficult.