HPV vaccine: one parent says yes, one says no 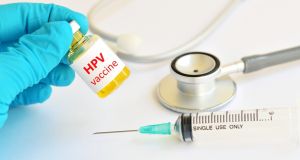 In 2014, there was an 86 per cent take up of the HPV vaccination in Ireland among eligible schoolgirls in Ireland.

Last year, just half of those eligible opted to receive it.

In Ireland, the HPV vaccine is offered free of charge to all girls in their first year of secondary school. The vaccine is given through injection into the upper arm in two doses, six months apart.

Human Papilloma Virus (HPV) represents a family of very common viruses that are passed on during sex. Most cervical cancers are caused by the virus.

Traditionally, people are greatly influenced by local, national and international health experts – and almost all advocate in favour of getting the vaccine.

However, a vocal group in Ireland claim the vaccine is damaging, and there is no doubt that many parents have been influenced by the controversy and confusion surrounding the vaccine.

Here are the views of two parents with widely different views on the vaccine.

Yes, I gave my daughter the vaccine – Gina O’Callaghan

“When my eldest daughter was in sixth class in primary school I received a letter telling me that the HPV vaccine would be available the following year. I gave it a great deal of thought, and spoke to some of the doctors at work to get their opinions. They advised me that it was effective and none of the scaremongering had been proven. The thing is, I see the impact of cervical cancer every day here in St Luke’s [in Dublin, where Gina is a medical secretary]. I’ve seen the damage it causes and the horror of it. I’ve seen young girls in their 20s come in the door here, and not come out again.

“I looked it up online and the vaccine has been available in Australia and Canada for a long time and it has significantly brought down the rate of cervical cancer so I literally went on gut feeling.

“I have a very open and honest relationship with her, so we spoke about it. I explained what I see in work, and what the vaccine was for, and how the HPV virus is carried through sexual contact with boys. We know someone who has lost both her sisters to cervical cancer when they were in their 30s. I also explained about the allegations, but told her they hadn’t been proven. My reasoning was that I gave her the childhood vaccines without thinking about it. This is for a specific kind of cancer, and I want to protect her.

“Most women are sexually active, and this vaccine is about protecting them all their lives, whenever they begin. It might only be one experience that changes their lives. People have seem videos by REGRET on Facebook pushing against the vaccine, but I feel many people are researching on social media rather than the qualified medical profession.

“So we agreed together that she would have the vaccine, but she came under some pressure from her friends and classmates. The way I see it, you have to tell the girls exactly what it’s about, and unfortunately some parents don’t want to get into that with their 13-year-olds. When she came home from having the jab, it was slightly sore like after any vaccine, and she went to football training that evening. Her arm was sore for a couple of days, just like the flu jab, and that was it.”

No, I refused to give my daughter the vaccine – Adel O’Neill

“My eldest daughter had it but then the REGRET group launched their campaign and I prevented her from having the booster. It’s hard to see all the scare stories and once you delve into it you get led from one horror story to another on social media. I haven’t made the decision on hard research, I just want to wait and see how it all works out between the two sides.

“My children are too young to be sexually active. I have time to make that decision before we need to look at it. I have the option to get it at a later stage so I prefer to wait. I certainly drew a lot of information at the school gates. I know one parent who opted out in first year and then asked the HSE to include her daughter in third year, so I know you can opt in at a later date. I think 13 is too soon. For my second daughter, who is in first year, we have opted out completely until I can make a definitive decision. If in doubt, opt out is my view.

“I know a lot of the information out there is fake, but unless I can be convinced otherwise, I’m on the fence. In my gut, I doubt think I’ll give it to them because I’m more in fear of them having a reaction to the vaccine than the cervical cancer. I believe I have that time to make the decision and my immediate concern is them taking a reaction to it.

“If there was an established cause for what’s happening to these children in the REGRET campaign I’d feel more reassured.”