About ME: Shining a light on a debilitating disease many believe doesn't exist

A sufferer has made a graphic documentary about myalgic encephalomyelitis 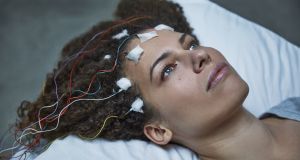 Jennifer Brea in “Unrest”: She developed ME following a fever that left her bedbound while studying for her PhD at Harvard. Photograph: Jason Frank

It is disconcerting being at a public event with a group of people, most of whom are suffering from an illness that they feel is misunderstood, and often misdiagnosed and mistreated.

Such was my experience at the screening of Unrest, a compelling documentary about people suffering from myalgic encephalomyelitis (ME), made by American ME sufferer Jennifer Brea.

In the film, Brea gives a graphic account of how, following a fever that left her bedbound while studying for her PhD at Harvard, she developed ME. We see her struggling up stairs on all fours and collapsing on the ground outside her home, unable to move. In her attempt to better understand the condition, Brea connected with people all over the world suffering from ME. In Unrest, we see these men and women – often in bed – and hear their stories too.

In the documentary, clinical immunologist Nancy Klimas describes how people with ME are sometimes put on antiviral medication, antidepressants or even antipsychotics

Defined by the World Health Organisation as a systemic neuroimmune condition, ME is often characterised by what’s called post-exertional malaise (PEM) or post-exertional neuroimmune exhaustion, which is a severe worsening of symptoms after even minimal exertion.

Four out of five sufferers are female.

In the documentary, clinical immunologist Nancy Klimas describes how people with ME are sometimes put on antiviral medication, antidepressants or even antipsychotics. But, explains, Klimas, “what people with ME have is an acquired immune deficiency”.

What was striking about the screening in Trinity College Dublin was how members of the audience spoke frankly about the difficulty of achieving diagnosis and appropriate treatment for ME in Ireland.

Carol Shaw is one such patient. “I was so bad when I got ME in 2008 that I had brain fog and all my muscles stopped working. I couldn’t move or eat and I had to be showered and dressed,” she tells the audience.

“I was sent to a neurologist who didn’t believe in ME and said that it was a trauma in my childhood. The graded exercises I was recommended didn’t suit me but now I’m a lot better and I’ve learned how to pace myself. The ME Facebook Group has been a godsend.”

Christine Fenton explains how she has spent a cumulative three months a year in hospital every year since 2011. “I’ve met the best and the worst of the health service. If you say too much, you’ve got Munchausen Syndrome [a condition in which people feign illness or symptoms] and if you say too little, it’s [deemed to be] psychological.”

Another audience member describes how she has been sick for 15 years – two years of which were spent in a wheelchair. “I’ve been in a very dark place and it took me a long time to come back up the slope – my husband used to brush my teeth – but with a lot of love, a huge amount of rest and a slower life, I’m back on the roundabout in a different way.”

Moira Dillon, who organised the screening of Unrest, has been suffering from ME for 10 years. “I kept going for two years in my job as a primary school teacher and then I collapsed. I ended up housebound and often bedbound. I spent years trying to find appropriate treatments for ME. More recently, I have improved through pacing and looking after the main symptoms.”

Common symptoms of ME include significant mental and physical fatigue, gastrointestinal problems, debilitating pain, sleep and immune system dysfunction, multisensory sensitivity, spasms and muscle pain, and headaches. People with ME often look normal, even though they feel very ill. Many sufferers were previously fit and active with busy social lives and careers. The condition can be mild, moderate, severe – or very severe.

One man who says he never talks to family and friends about ME explains how he got it at 16, was diagnosed at 18 and was acutely ill from aged 16-23. “I don’t think about having ME now. I’ve three children now and I’ve found a new normal.”

Christine Fenton says that the difficulties patients with ME face is linked to the fact that the health service is set up in specialities and ME doesn’t neatly fit into any of these specialities.

Many people with ME are diagnosed with the condition because their symptoms don’t match other conditions. “I carry an emergency file with me because most doctors and health professionals don’t understand it,” says Fenton. “My best advice to sufferers is to learn to listen to your own body and live a healthy lifestyle scaled down to what suits you personally. Ultimately, I have found geriatricians the most helpful because they are used to dealing with complexity.”

Dr Jack Lambert is an infectious diseases specialist at the Mater hospital in Dublin. He says that ME is often a label that doctors give to patients when they don’t know what’s causing their problems.

“The question is, what causes it? We need to discover what characterises the immune deficiency in ME. There can be a known or unknown infection which leads to this cascade of abnormalities. But the problem is there is not enough research into why these changes are happening.”

Dr José Montoya, professor of medicine at Stanford University Medical Center is researching the presence of specific cytokines (molecules that aid cell-to-cell communications in immune responses) in the blood of people with ME. He says, “we need to change the narrative from ME being a mysterious, poorly understood disease with no treatment to saying the ME is a disease that is ‘being discovered’ and targeted treatments will follow.”

The National Centre for Neuroimmunology and Emerging Diseases at Griffith University Medical Hospital in Queensland, Australia, is also involved in research into biomarkers for ME.

Irish sufferers of ME participated in the Millions Missing campaign outside the Dáil last May. The global campaign, which displays pairs of shoes for every person with ME who isn’t present at the event, seeks to highlight the invisibility of the disease. The latest figures suggest 17 million people around the world suffer from ME.