How Irish universities are involved in their students’ health 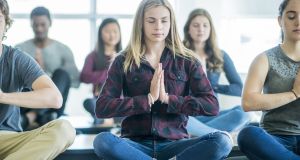 “If you equip third level students to take on a good work/life balance, there is a good chance that they will stick with it as they embark on life,” says Brian Mullins, director of Health Promotion at University College Dublin. Photograph: istock

The principle that healthy teenagers are much more likely to become healthy adults is the core philosophy behind the international healthy campuses initiative that Irish universities are now embracing.

The current generation of students – and the academic staff in third level colleges – has arguably much more signposting towards healthy lifestyles than previous generations, but this new initiative aims to embed a so-called salutogenic [focused on health promotion rather than disease avoidance] approach into all aspects of campus life.

Aware that many students struggle to eat healthily and keep body and mind fit and well while juggling lecture timetables, project deadlines and exams, third level institutions now offer everything from sexual health and alcohol and drugs awareness workshops to mindfulness/stress management courses to cookery, yoga and Tai Chi classes to 5km fun runs and step walking challenges. Students themselves are also more willing to share their experiences of mental health difficulties to help others in similar situations.

“If you equip third level students to take on a good work/life balance, there is a good chance that they will stick with it as they embark on life,” says Brian Mullins, director of Health Promotion at University College Dublin.

In 2015, University College Cork became the first campus in Ireland to achieve the status of a Health Promoting University based on a UK framework for healthy universities.

In 2018, an earlier attempt to establish a national network of health promoting universities was revived with the support of the HSE and the Healthy Ireland framework. Now, Dr Michael Byrne, medical director of student health department at UCC believes all Irish universities can embrace the ideals of the internationally recognized Health Promoting Universities (see below). He is however keen that there is an accreditation process for Irish universities to go through to get and maintain their status.

“It’s one thing to offer alcohol intervention and smoking cessation programmes but it’s another thing entirely for academic assessments and policies to be health-proofed. The internationally recognized Health Promoting Universities [designation] influences policies, practices and procedures across all academic disciplines,” explains Dr Byrne.

In December, 2018, Dublin City University launched its health and wellbeing charter as its first step to coordinate and promote healthy activities across their three campuses in Glasnevin, St Patrick’s College and All Hallows College, Drumcondra.

James Galvin, head of the Department of Sports and Wellbeing at DCU will lead the DCU Healthy programme with the aim to become an official Health Promoting University by 2022.

“We aim to build a healthy campus community with collaborations and partnerships with other organizations,” explains Galvin. For example, the youth mental health organization, Jigsaw run mental health workshops for staff and students and the HSE funded project, Responding to Excessive Alcohol Consumption in Third Level (REACT) host workshops to address the harmful effects of alcohol.

Step counters will be put up around the campuses so students and staff can challenge themselves to walk more every day. The DCU active travel initiative also provides branded bicycles for students travelling between the three different campuses.

Galvin says that DCU aims to promote student and staff health through initiatives on mental health and wellbeing, healthy eating, physical activity, sexual health, alcohol and drugs and smoking. This range of health initiatives is already available in other universities such as Trinity College Dublin and University College Dublin – although not yet brought together under a health promoting university branding.

Galvin believes that the branding will help. “By embedding this across our campuses we want to enable students to become change agents for health in their future professional and personal lives,” says Galvin. “It’s about creating a positive environment so people can flourish and thrive, be able to depend on one another and feel confident to ask for help and advice when they need it,” he adds.

Motivating students – and staff – to partake in the array of healthy activities available on Irish campuses will be the ultimate test for third level institutions as the Health Promoting Universities initiative gains ground here.

The rise of Health Promoting Universities

In 2015, University College Cork was designated as a Health Promoting University by HSE South, following a UK model for health promoting universities.

The Healthy UCD strategy was also launched in 2015 as part of the Healthy Ireland initiative to developing health promoting campuses in Ireland.

Dublin City University launched its Health and Wellbeing charter for staff and students in December, 2018 with the aim to become an internationally recognized Health Promoting University by 2022.

In 2018, the HSE and Healthy Ireland held two meetings with health promotion staff at Irish universities to start developing a healthy campus charter and framework specifically for Irish universities. “We are finally progressing towards a sector-wide approach with best international practice,” says Dr Michael Byrne, the head of student health department at UCC who attended the Okanagan conference on health promoting universities in 2015.

What can you buy for €275k in Portugal, Spain, France, Greece, and The Naul, Co Dublin?
Real news has value SUBSCRIBE