How can you make your life less lonely? 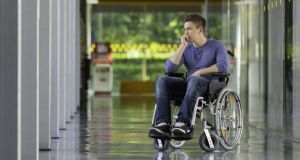 “The number of evening and weekend courses available from September is uncountable but choose courses or events on the basis of interaction between people.”

Hope and fear are the watchwords, I think, at this time of year when colleges open their doors to students, many for the first time.

On the surface the start of a college year looks exciting with lots of happy, energetic, young (mostly) people milling about.

But for those who are shy the challenge of loneliness looms. And you don’t have to be shy to experience loneliness – it’s hard to get a foothold in a completely unfamiliar world.

But loneliness isn’t only the prerogative of students. For many of all ages it’s a new or old normality.

Solitude is usually chosen and can be enjoyed, sometimes bringing with it a sense of freedom or peacefulness. Loneliness, on the other hand, is neither chosen, wanted nor enjoyed.

The capacity for handling loneliness varies from one person to another. It is a hard sentence on those who can’t handle it and who have it thrust upon them. When researching this article I came across a piece from seven years ago – Róisín Ingle on the Put Upons – which has stuck in my mind. She referred to a woman living in a big house who rang Gay Byrne to say her children and grandchildren never came near her except on Christmas Day when they were full of false bonhomie and cheer. They left her alone the other 364 days of the year and she felt like shutting the door in their face on Christmas Day also. Another woman said her mother cried all night because her other adult children never went near her.

Others would be better able to handle loneliness. I would count myself among these though I have no wish to put my assumption to the test – I had enough of it at a point in the past.

Around now, lots of people look up courses and events they can go to in order to connect. In colleges you’ll often find clubs looking for members. Others (including students) can go to meetup.com to find a plethora of events in their area. The number of evening and weekend courses available from September is uncountable but choose courses or events on the basis of interaction between people. A readers’ or writers’ group involves a good deal of interaction and if it doesn’t, find another one.

Groups for cycling, football, walking, environmental cleanups and such activities are really useful for people seeking to connect. The same goes for groups that meet to go to movies, the theatre or art galleries. Choirs provide another great way to connect though in my case I would first have to undergo years of therapy to overcome my fear of singing.

In approaching this or any other strategy I came across a piece of advice from Dr Karyn Hall on Psychcentral.com which people seeking to connect with others might well follow, especially if they are a bit shy. This is to take what’s called “opposite to emotion action”. In other words when tempted to act out of feelings that disconnect you from others, go against the feelings.

So if you meant to go to an event but your fear of rejection makes you feel like walking away, do the opposite to your feeling and go to the event. If you’re tempted to make yourself invisible in a group, walk up to someone and start talking to them. If you’re afraid to smile at people, smile at them. If you’re older and lonely because your family doesn’t bother with you but you feel reluctant to say it, go against the feeling and say it. In all of these cases you would, of course, exercise common sense – you wouldn’t really walk up and make friends with the guy who’s selling little bags of white powder down the lane.

Tackling loneliness takes action and it’s not always as easy as I might be making it sound. But it’s worth the effort.

We may be designed to want our own space which is what solitude can be but we’re not designed for loneliness.

Expert tips: A systemic psychotherapist on how to look after your relationships

Good communication is a core need of every healthy relationship

Self-isolation fatigue and the art of survival
4

Now is the time to give up smoking and vaping
6

Expert tips: A systemic psychotherapist on how to look after your relationships
7

Unable to work out? ‘Muscle memory’ may help you keep fit
Real news has value SUBSCRIBE