Her problems started when she became very sick with flu. Could it be linked to a vaccine? 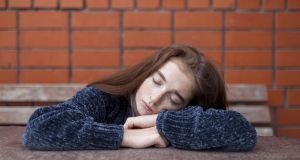 Question: My 14-year-old daughter complains about being tired all the time. She was never that interested in sports but now has dropped out of all the ones she used to do.

She tends to sleep on in the mornings and wants to spend lots of time in her room. I am worried about her being inactive and I have been encouraging her to get out more doing cycling and family walks etc. She always resists when I push her and then can complain of headaches or sore joints after doing exercise or when we finish a family hike or something like that.

Her problems all seem to start about 14 months ago when she was very sick with a flu and took several weeks to recover. It feels like she has never fully recovered from that time. She got a bit better earlier this year and had more energy for going out, but then got a bad cold and all her tiredness and symptoms came back.

I have taken her several times to her GP, who has done blood tests etc (which show nothing wrong) and we have put her on multi-vitamins etc. I have read about Chronic Fatigue Syndrome and it seems to describe many of her symptoms.

I mentioned it to this GP but she thought my daughter’s symptoms weren’t bad enough “yet” to get a CFS diagnosis. However, she did say she would monitor my daughter closely.

I have also read that some people think that CFS can be caused by getting the HPV vaccine which is worrying because my daughter did get a vaccine at the same time she got the original flu.

What should I do to help her?

Answer: Chronic Fatigue Syndrome (CFS) is a complicated condition characterised by symptoms such as extreme tiredness, disrupted sleep, and physical pain. The symptoms have no underlying medical cause and are usually exacerbated by exercise and not improved by rest. Despite publicised myths to the contrary, careful studies show no link between CFS and the HPV vaccine. Part of the confusion can be that a common time for the onset of fatigue symptoms is in the 13-14 age group which coincides with the time of the vaccine. However, controlled studies have shown no increased rates of CFS in teenagers who have taken the HPV vaccine compared with those who have not.

There is no single medical test to confirm CFS, and diagnosis is usually by a process of excluding other medical conditions over time. The severity of symptoms can vary greatly with some people being mildly affected and making good recoveries over time while others more severely affected in the long term. Children and adolescents often have the best recovery rates. Many people experience triggers for their fatigue symptoms such as getting a flu or other viral illness (which may be the case for your daughter). The condition can also be known as Post Viral Fatigue Syndrome (PVFS) and also Myalgic Encephalomyelitis (ME).

Getting the right treatment for your daughter

It is good that you are working closely with your GP and this is the first port of call for your daughter. Whether the GP makes a formal diagnosis or not, it is important to get ongoing medical support and treatment to deal with each of your daughters symptoms as they present. You can also ask your GP to make a referral to specialists as appropriate. While it can be useful to have a name for what your daughter is dealing with, some doctors may be reluctant to initially use a long-term diagnosis such as CFS as they work on supporting patients to recover.

Talking to your daughter about her illness

Take your daughter’s symptoms seriously and be understanding and supportive as you help her manage. Many young people with debilitating fatigue symptoms describe not being believed at the beginning with many people thinking they are faking their symptoms or that they are simply avoiding doing things. This can lead to feelings of frustration and depression.

In addition, many well-meaning people can put pressure on them to get active, when they can’t do this because of their fatigue. Indeed, bouts of exercise can make their symptoms worse. Whether you use a formal diagnosis or not, talk about what your daughter is experiencing as something real and understandable. You can explain to her that “lots of people develop fatigue symptoms after getting a virus and can take a long while to recover”.

As well as following medical advice and treatments, lots of different things can help your daughter’s recovery such as ensuring she is eating nutritious food, getting the right amount of sleep (but not oversleeping), keeping her mind positive setting small recovery goals for being active. For example, rather than setting a “big” goal of going for a walk, the first step might be getting out of bed and doing an interesting activity such as reading or sitting out in the garden. Then she can build slowly from there.

The key is to go at her own pace and to encourage her to come up with her own recovery plan that she is in charge of. Different alternative treatments may work for her such as meditation, mindfulness, acupuncture and special supplements. While none are a silver bullet, individual treatments that she believes in may help her manage pain and other symptoms as well as keeping her motivated to keep going in her recovery. Finally, seek support and contact the many national organisations that offer support and information both online and face-to-face to both carers and patients suffering from CFS such as imet.ie, irishmecfs.org/mesupport.co.uk, and  meassociation.org.uk

John Sharry is founder of the Parents Plus Charity and an adjunct professor at the UCD School of Psychology.He is author of several parenting books including Positive Parenting and Parenting Teenagers. See www.solutiontalk.ie for details of courses and articles

Run, don’t walk, to nab the best makeup collection of the summer
5

Are we really facing the death of the office?
6