Fighting arts: Tell me about . . . Kendo 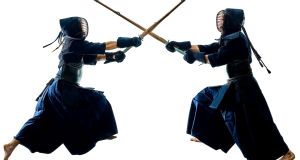 An interest in Japanese culture first sparked Kathryn Cassidy to take up the martial art, Kendo, when she returned to university in 2006. The sport has led her to teaching and coaching at both club and national level.

Where does Kendo originate?

It’s originally from Japan. It is based on the sword fighting styles of the samurai warriors. For a long time it was practiced by just the samurai class but over time, in the mid to late 1900s, it became more organised as a sport and exercise art that could be taught in schools and so on, not only to keep people fit but it also has some good moral principles for students.

Worldwide, it’s estimated that six million people practice Kendo, with around a third of those in Japan. It is also popular in Korea, the US and parts of Europe. In Ireland, we have six clubs and we have approximately 100 practitioners at the moment. It is only gradually catching on here in Ireland, the federation formalised in 1998.

What is the main focus of Kendo?

Kendo means way of the sword. It’s full on attacking with a bamboo sword, that’s representing the samurai katana, but it’s a full contact sport where you attack and counter attack against an opponent. It’s all paired work where you are doing free sparring all the time, but it looks a bit different to free sparring in other martial arts because you are in full armour and you are holding a bamboo sword.

I think the ultimate attack in Kendo is a strike to the head and this is kind of the purest and most perfect attack, its called Debana Men. Basically, you’ve two people and they are both kind of probing, looking for an opportunity to attack and then they both launch an attack at the other person’s head at exactly the same moment. What will be happening here is that both players are trying to provoke their opponent to attack and predict the exact moment that the attack is going to come, just as their opponent makes their decision they are able to launch their attack and complete it before their opponent. Not only do you launch the same attack, but you do it first, it’s very demoralising for your opponent. You are able to dominate your opponent and crush your opponent’s spirit, in a way.

We don’t wear belts or show any outward mark of rank really, but we do have a grading system. It starts with kyu grades, there are six up to 1st kyu and after three months of getting your 1st kyu you’re eligible to go for Dan exams. Dan grades are internationally graded and recognised. It goes up to eighth Dan, that’s the highest, its notoriously difficult to pass, under one per cent pass. The test is held maybe twice a year in Japan – so far no European has ever succeeded in passing eighth Dan. In fact, no woman has ever passed eighth Dan in Japan.

We don’t have clubs in every village but we do have clubs in some of the major towns. We’ve a couple of clubs on Dublin, there are clubs in Galway, Cork, Belfast and one started up in Cavan. You can get information on them on the Irish Kendo Federation website.

It is a martial art or a sport that is a life-long art, you can start when you are very young – then if you look at Japan there are plenty of practitioners in their 80s and 90s still practicing. So it’s something that you can do all your life, it’s good exercise, keeps you healthy and it maybe contributes to these people being able to continue into their later years.

Some competitions you might get men’s and women’s divisions, but in general men and women are competing together and usually it’s mixed practice and that’s something that is kind of unusual for a full contact sport because we really do go full on, no holding back when you attack but you are very well protected when you’ve got all the armour on

For me, as a woman, I enjoy that I can go out and compete and train with big tall guys or young fast guys and they may have some advantages in terms of speed or in terms of strength, but I can use timing. You fight clever.

As I said, we all practice together, you don’t have weight divisions and men and women can practice together and that’s possible because it is quite safe. The armour that we wear gives us protection, you’ll sometimes get hit off of the armour and you might get a bruise. The main injury people do get is blisters because we train barefoot with a lot of sliding footwork across the floor.