How can you find a sense of meaning in your work? 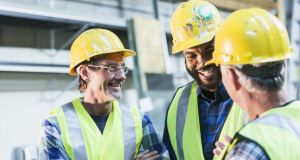 You spend a lot of time at work and if you can deepen its meaning for you, then you deepen the meaning of your life. Photograph: iStock

Towards the end of the last century, to get into the editorial department of The Irish Times from Fleet Street in Dublin city centre you had to talk to a man called Harry, who worked just inside the door.

To me, Harry was Harry and I thought no more about it, but, today, I think he provided a fine example of a person who found meaning in his work.

Harry was an amiable man who took a big interest in current affairs. He saw what he did as an important part of keeping a newspaper running smoothly.

Frankly, if you let everybody in the door who wanted to get in – some of whom wanted to keep the truth out of the news – you would never get an edition out and Harry knew it. And if you kept people out who should be let in, the quality of the newspaper suffered too. Harry knew that also.

He was on speaking terms with everybody from the chairman to the messengers. (The difference between them was not as great as you might think. In a newspaper at that time, today’s messenger could eventually end up as your boss.)

Sometimes, when I was sent down to the Companies Office – no internet so you had to get up and go there – I would see Harry in a corner on his day off crouched over a stack of files. I never asked what he was doing, but I would say he had a newspaper person’s instinct for uncovering what is hidden.

He made more of his job than the job description. Like the rest of us, he was a cog in a wheel, but he knew cogs matter to wheels.

When he got a diagnosis of terminal cancer at a relatively young age, he put together whatever money he could and visited places in the world he had always wanted to see. Everybody from the chairman to, yes, the messengers came to his funeral.

Harry came into my mind the other day while I was listening to a piece on the US National Public Radio service about people who value their work and the contribution they themselves can make.

Psychologist Amy Wrzesniewski at Yale University talked about her research with cleaners in a hospital. Naturally, some saw the job as just a job, did what they were paid to do and left it at that. But others found added meaning in the work they did. One would every now and then rearrange pictures in the rooms of unconscious patients just in case it might make a difference to them. Another always checked the ceiling in case anything up there, like a cobweb, might disturb a patient. Another made a mental note of who had not had a visitor for days and made sure to chat to them.

These cleaners, asked to describe the job, gave answers that went beyond the job description. One even described herself as a healer. In the eyes of management she was a cleaner but in her own eyes she was taking part in the healing mission of the hospital – just as Harry saw himself as part of the mission of bringing out a newspaper.

If you don’t have that sense of meaning in your work, how can you cultivate it?

According to Wrzesniewski, it’s about a few things. One is expanding the boundaries of what you do – just like the cleaner who changed the pictures around. She also believes that having positive relationships with your colleagues and supporting them in their work adds meaning to your own work. A third is seeing the wider contribution your job makes to doing what the organisation is there to do.

If you’re on a beach somewhere this August and not overly keen on going back to work, have a think about Harry and about those cleaners. You spend a lot of time at work and if you can deepen its meaning for you, then you deepen the meaning of your life.

Padraig O’Morain’s (pomorain@yahoo.com) latest book is Kindfulness. He is accredited by the Irish Association for Counselling and Psychotherapy. His daily mindfulness reminder is free by email