Limerick Suicide Watch: ‘You have to be nosy, trust your gut’

The group, which patrols the river Shannon, says it has saved 180 lives since 2016 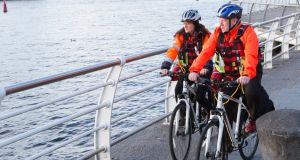 “They started calling it the ‘mechanical banshee’. It would have been here on a fairly regular basis so people had associated the helicopter coming with people in the river, and more often than not there was. You’d hear it and go ‘oh no. Not again.’ It’s so loud and comes so low, all of Limerick can hear it. And it was because of that, all of this started.”

Standing in the base of Limerick Suicide Watch, the group’s chairperson Colm O’Byrne is telling me how the volunteer crew started out patrolling the city’s river, trying to prevent death by suicide, with just a few people operating out of the back of a car.

Since 2010, Limerick city has had the highest rate of suicide in the country. The most recent figures from the National Office of Suicide Prevention shows the city’s rate was more than double the national average at 21.8 deaths per 100,000 population for 2013-2015. For Dublin, the figure is 7.3. The national average for the same period is 10.1.

The bridges along Limerick’s river Shannon are monitored every night of the week, with Limerick Suicide Watch and another voluntary group, Corbett Suicide Prevention Limerick, each covering different days.

Since it started in 2016, Limerick Suicide Watch says it has saved 180 lives.

“They would be serious interventions. That’d be physically taking people down off bridges and walls, or where you talk to somebody who is sitting on a bench but who intends on going into the river,” says O’Byrne. Sometimes, people have jumped while a volunteer was talking with them.

Valentia Coast Guard (R116), which attends to emergencies on the river Shannon, says the number of calls it has taken since the group started “is definitely down”.

While, in many cases, Limerick Suicide Watch is able to calm the person, call a friend or family member to come take them home, and, hopefully, get the help they need, other situations are even more challenging. “You meet others who know a lot about suicide intervention, they know all the techniques of Asist [Applied Suicide Intervention Skills Training] that we use and so when we are trying to give them all the reasons they shouldn’t take their own lives, things like their friends and family, they have a counter argument for each,” says Joan Forde. “It’s happened to me twice, with two different people. In those cases we had to call the police.”

Shadowing the group on a cold but dry Monday evening, we set off at 8pm on a four-hour stint around the city’s river, where we will cover about 10km on foot, patrolling the area from Shannon Bridge to Thomond Bridge and back again.

While there’s usually a team of eight, there are two extra people tonight. Louise Reilly and Kate Flynn are completing their three-month probation and so will just observe how the volunteers deal with situations.

Once their probation is complete, they will, like the group’s other 60 volunteers who come from all walks of life, receive training in suicide intervention, first aid, defibrillators, rescue throw-bags, walkie-talkie communication and river training.

As we head off, we split into two teams of four, each taking one side of the river, with two other people on bikes covering extra ground up along the city’s canal. O’Byrne describes their work as “borderline harassment” while Kaoife McElligott says “you have to be nosy” and trust your gut.

“You salute everyone. If you get no response and you feel there is something questionable, you might turn around and follow them back down or salute them again and see if they want to talk,” McElligott says. “You’ll think, ‘something’s not right there’. Even if someone is having a lazy day you’d still probably raise you head and nod and acknowledge, but if someone doesn’t do that, there’s something wrong. They could just be having a bad day and need to talk about it, because that one bad day could turn into five bad days and that could turn into drinking for a week, you don’t know.”

Each of the volunteers has the intervention they remember most.

For Lucy O’Hara, it was the man she met down by the river who hadn’t communicated with anybody in six weeks. “We were the first to talk to him and ask him was he okay, nobody had spoken to him. He had been upset and he just broke down.”

For O’Byrne it was the teenage girl, who was the same age as his own daughter. “She was very upset. We spent an hour with her, we didn’t laugh, we listened. Her mam and dad came down. They were very good to her. They had no idea what was happening, no one knew the stress she was in. I’m sure she got the help she needed. Though we rarely get feedback.”

Although their main aim is suicide prevention, sometimes the team is tasked with medical interventions too. At one point, the group helps a woman who has collapsed and is complaining of chest pains.

The next few hours are what Limerick Suicide Watch calls “a quiet night” and there are no more interventions.

While there’s plenty of banter and craic among the group throughout the evening, eyes are kept peeled at all times on the river and its surroundings, until they head back to base shortly after midnight, tired, but still in good spirits.

“What we do is important, unfortunately, and we are needed,” says Niamh Doyle. “It’s what happens to the people after we bring them away from the river, that’s where they are being let down.

“They are being brought to hospital and being discharged the same day. You could meet the same person three days in a row. Everybody joined this group for reasons specific to themselves. And being honest, I’d say we get a lot more out of it than we give. Us being out here, it’s like first aid. We are keeping them safe right now. We’ll keep doing this. We don’t mind.

“There’s a huge satisfaction knowing you are sending someone home to their family, knowing that a devastating loss hasn’t happened.”