Training to help take on cancer

Amid growing evidence that exercise is beneficial during and after cancer treatment, Cancer Care West has opened a purpose-built gym in Galway 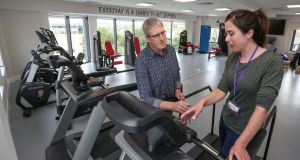 There are 21 steps up two flights of stairs to a very special gym in Galway, and Tom McCarthy has a clear memory of how hard each one was the first time he visited. “It was the mental challenge, more than the physical,” says the 43-year-old father-of-two.

McCarthy had just finished treatment at University Hospital Galway for cancer, and was adjusting to the fact his life had unexpectedly changed.

Like many in his situation, it wasn’t easy. However, he says he found “incredible” support from Cancer Care West after he was referred by his medical team.

The charity, which provides accommodation for patients who have to travel for radiotherapy at University Hospital Galway, also runs dedicated support centres and outreach services for those living in seven western counties.

Its centre in Galway opened its doors in 2009, and is staffed by psychologists, counsellors, oncology nurses and a range of qualified cancer-support specialists. Counselling is offered to patients and their families, and there are also free courses in yoga, meditation, reflexology, tai chi, nutrition, financial advice and “survivorship”.

It relies on donations, and an annual swim across Galway Bay in memory of the late Frances Thornton is one of its major fundraising events.

Earlier this year, the centre opened its first purpose-built gym, and McCarthy has been one of its first regular visitors. The facility, fitted with a range of equipment, is available to any of the centre’s 1,400 clients a year.

“We always ran exercise classes,” Cancer Care West director of psychology and support services Dr Helen Greally says. “Now we have a dedicated space for that, after a €350,000 refit, and we have also kitted out a play therapy room for children of patients.”

Physiotherapist Emma Houlihan, who supervises the gym programmes, says there is a growing body of medical opinion suggesting that exercise is beneficial during and after cancer treatment.

Britain’s Macmillan Cancer Support organisation has developed a “Move More” programme, she says. It is based on the idea that being physically active can help prevent and manage some of the side-effects of treatment, such as fatigue, depression, muscle-wasting and risks to heart health.

“The Clinical Oncology Society of Australia recommends maintaining participation in at least 150 minutes of ‘moderate intensity’, or 75 minutes of ‘vigorous intensity’ aerobic exercise, such as walking, jogging, cycling or swimming, each week,” she says.

It also recommends two to three resistance sessions each week, such as weight-lifting, involving “moderate to vigorous” intensity exercise, targeting the major muscle groups. “Moderate intensity means being able to talk after your exercise, but not being able to sing or whistle,” Houlihan says.

“We have people who have been physically fit, and then we have people who never used a gym before and their body doesn’t feel like theirs after treatment,” she says. “They really feel the benefits of targeted programmes, and we want people to enjoy it”

Participants are assessed through Cancer Care West’s survivorship group courses, and some people have very specific requirements – “having the strength to ride a motorbike, for instance”, Houlihan says.

“Fatigue is the one common denominator for everyone who is having, or has been through, treatment – as in waking up and feeling as exhausted as when one went to bed 10 hours before,” she says. “For some people, fatigue can last some years, and all the research into exercise shows it reduces this, while also helping to deal with psychological stress.”

McCarthy still remembers clearly that feeling of being “almost beyond fatigue” during and after treatment.

“I had played rugby, I swam, I worked on my father-in-law’s piece of bog, and now I was unable to get out of bed for days,” he says.

“I have always been an early-morning guy. Hearing my wife doing everything to get our two kids ready for school, or lying there while my father cut the lawn was one of the hardest things to cope with when I was recovering,” he says.

“Within an hour of my first visit to Cancer Care West, it gave me a different perspective on my illness. The gym has been terrific and it is a non-competitive environment, where you set realistic goals. It is a type of social hub without the pressure,” he says. “I also found the gym visits helped improve my concentration. When I was undergoing treatment, the radio was the only thing I could focus on. I had no inclination to read. Once I began regular gym sessions, I found that I started getting that focus back.”

There’s another significant aspect to tailored exercise as a form of treatment to prevent cancer returning, according to Galway University Hospital oncologist Gregory Leonard. “We know that certain medicines that enhance the immune system are having extraordinary results in some patients with cancer, and exercise is another strategy that can improve the immune system,” he says.

“Many people may have felt that if they had or have cancer that they couldn’t participate or do exercise, but hopefully this will become something similar to cardiac rehab where it’s almost taken for granted that it should be done and that there are great benefits to it,” he says.

“Galway people love getting out and about and walking the ‘Prom’, and that should also apply to cancer patients and survivors,” he adds.

“So hopefully if people participate in some of these programmes in the gym it will give them the skills and a recipe that they can use in the future. We are very hopeful that survivorship programmes like this, newer therapies like immunotherapy, and future preventative measures such as an aspirin prevention trial that is coming to Galway very soon will all have a huge beneficial impact for our patients.”