Ban heading in football or simply teach children how to do it properly? 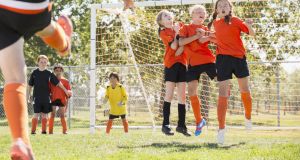 While a leading expert on brain trauma believes that football authorities should consider banning heading in football, an Irish paediatric consultant has said it is important children are taught how to head the ball properly.

Dr Bennet Omalu, who discovered the debilitating brain disease chronic traumatic encephalopathy (CTE) in American Football players, also believes children do not have the “brain prowess” to play the game as adults do and heading should be outlawed for children under the age of 18.

It was recently reported that Rod Taylor, a former wing-half with Portsmouth, Gillingham and Bournemouth, died in April having suffered from the condition, which is a form of dementia. He is the second English footballer to have been diagnosed with CTE after Jeff Astle, the former West Brom striker, who died in 2002.

CTE, which affects behaviour and memory, is caused by repeated head trauma. Omalu told BBC Five Live’s Phil Williams Programme: “I believe eventually at the professional level we need to restrict heading of the ball. It is dangerous. It does not make sense jumping up to control (an) object travelling at a high velocity with your head. The human brain floats like a balloon inside your skull so when you head the ball you suffer brain damage. You damage your brain when you head the ball.

“Playing soccer would increase your risk of suffering brain damage when you are much older and developing dementia and chronic traumatic encephalopathy, that is why, I believe, no child under the age of 18 should be heading the ball in soccer. And children under the age of 12 to 14 should not play soccer as we play it today. Only adults should play soccer.

“Kids under the age of 12 to 14 should play a less contact form of soccer which we should develop for them. Kids between 12 and 18 can play but should not head the ball. Soccer is a high dexterity sport. A high visual, spatial sport that requires very sophisticated levels of brain functioning. Children under the age of 12/14 years old have not attained that level of brain development and that is why when you watch children play soccer as we played they are usually very sluggish.

“They are more likely to bump into one another. They just don’t have the brain prowess to play soccer as we play. I know this is difficult for many people but science evolves. We change with time. Society changes. It is time for us to change some of our ways; this is who we are as human beings.”

However, speaking on RTÉ 1 radio Thursday morning, Dr Niamh Lynch, paediatric consultant at Bon Secours Hospital in Cork, said that “with all due respect to Dr Omaleau, he’s a pathologist. He looks at the brains of deceased people, then looks back at their past and puts the pieces together – he has done tremendous work. If we were to recognise that there was severe neurocognative impairment amongst large groups of people who play sport then we would have realised this quite a while ago, it’s important to take everything in context.

“He’s starting with a hypothesis and going to the conclusion without really looking at any of the evidence in the middle. The cohort of men that they’re looking at are men in their 70s who played football in the 1960s. From looking at footage and photographs of football in the 60s the ball was like a cannonball, the players face becomes squashed when they head the ball, it looks like a very heavy hit that they take.

“It’s all the more reason for children to be taught how to head the ball properly. Any soccer coaches that I’ve spoken to have said it’s an important part of their training. You can be sure that children will always want to emulate the style of their favourite player, so if they’re not being taught how to do it properly at training they’re going to go out on the green and give it a go themselves.

“I would advocate that it’s done in a controlled and supervised way and that they’re taught the correct way to do it, rather than waiting until they are 18 and then saying ‘off you go now’. It’s important to learn motor skills when you’re young so that you can consolidate them over a long period of time.”