Can you raise a gender-neutral child? Meet the parents who do

Number of parents interested in exploring different approaches is growing 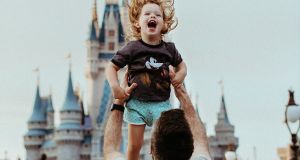 Utah-based Kyl and Brent Myers have not revealed their child’s biological sex or assigned a gender identity. They are sharing the experience of bringing up Zoomer on Instagram.

Finian Murphy has noticed a funny thing when he take the bus with his two-year-old. When the toddler is sitting quietly, people will admire his “lovely little girl” or say “isn’t she so cute?” If his child is “creating a ruckus”, Murphy says, people will smile and say “boys will be boys”.

Murphy, a strategic planner with Core Media, and his partner Siobhan, who works with Social Entrepreneurs Ireland, are trying to raise their child free of gendered ideas about how they should play, look and behave. But society frequently has other ideas.

If Tom is wearing a bright pink top and somebody says ‘isn’t she cute’, I don’t correct the gender

“It’s the everyday things that people do that they don’t consider. It’s the expectations around toys kids like, or clothes they should wear. Nine times out of ten, people have good intent, but they also like certainty,” says Murphy.

Raising their child in a gender-neutral environment “wasn’t something we’d planned from the beginning”. They both work outside the home, share childcare equally, and believe in gender equality, so it just became the way they parented, he says.

Unlike a small, but growing, number of gender-affirming or gender-creative families raising “theybies” in the US, they haven’t made a decision to conceal their child’s biological sex from the outside world, and they don’t insist on the pronouns “they” and “them”. But they do try not to let the fact that Tom is biologically a boy define him.

“He is a boy and we wouldn’t go out of our way to hide it. From a practical point of view, if you’re going to go down that route, you end up refusing to answer questions like, ‘are they a boy or girl’, which is often the first question people ask. In conversation, too, pronouns are key and we don’t have a gender neutral pronoun like the Swedish ‘hen’. So, practically, it’s very difficult to raise a child like that. You end up explaining yourself 100 times a day.”

And there does come a point, he says, where as a parent, you have to ask “are you projecting your ideology on a kid or not? You have to figure out where the line is.”

In his case, “if Tom is wearing a bright pink top and somebody says ‘isn’t she cute’, I don’t correct the gender.”

Interest in gender neutral or gender creative parenting – often known by its acronym GCP – has grown in recent years, spurred on by celebrities like Pink and the Canadian prime minister Justin Trudeau, whose son wore a dress at Hallowe’en, and Angelina Jolie, whose daughter Shiloh usually opts to dress in a similar style to her brothers.

More seriously, there is a better understanding of the issues facing transgender and gender-nonconforming people, says chartered psychologist Aisling Leonard-Curtin, who is co-editor of Mindfulness and Acceptance for Gender and Sexual Minorities.

Seventy-eight per cent of trans people have thought about ending their lives and 40 per cent have attempted suicide, according to the Trans Mental Health and Well-being Survey, which was conducted in Ireland and the UK between June and August 2012.

As a result, “babies, children and people are socialised to interact differently based on their sex assigned at birth”.

Few parents take their desire to avoid gender stereotyping as seriously as Utah-based Kyl and Brent Myers, for whom raising a theyby means not revealing their child’s biological sex or assigning them a gender identity until the child is ready, at around the age of three or four.

They are sharing on Instagram and a blog (raisingzoomer.com) the experience of bringing up their two-year-old, Zoomer. On social media, they patiently and politely field questions from the curious on how to decide what to do with their child’s hair (“We are letting Z’s hair grow until they tell us what they’d like to do with their hair”) and how to navigate princess games in a gender-neutral household (“We choose gender-neutral words instead, like police officer & monarch/royalty.”)

“A part of why we are parenting this way is because intersex people exist and transgender people exist, and queer people exist, and sex and gender occur on a spectrum yet our culture loves to think people, all seven billion of them, can and should be categorized as one of two options,” writes Kyl on her blog as part of a Q&A with NY Mag.

Gender creative parenting is not about denying biology or anatomy, Myers says. She accepts that there are biological differences between the sexes, but believes gender is a “social construction.” She says “the primary reason that we wanted to parent this way was because we wanted to re-write the script for how our child grew up to think about gender”.

Few Irish parents go this far. But the number interested in exploring ways to parent other than simply following the sometimes very rigid gender norms imposed on children is growing, says psychotherapist Joanna Fortune. “I get enquiries from both parents whose children don’t identify as their biological sex, and from those who are considering raising their kids gender neutral. Ultimately, parents usually just want to do what’s best for their children, and this is part of that. In 10 years’ time, it’s possible we won’t even remember a time when there was so much debate about it,” she says.

For parents who chose to go the gender creative route, it’s easier from a practical point of view when you’re staying at home full time, or when they’re in their own home with an individual childminder. “In that case, I think you could do this very successfully at least until school and at that stage your child has the language and narrative to decide themselves who they are.”

But doing so would call for tolerance, patience and understanding on all sides. “This is quite a new phenomenon and you are going to get questions and frustrations, and you do have to be prepared for that. Inform yourself, try and link in with other parenting groups who support your choice. Be tolerant and share information. Just because you’ve got it nailed, it doesn’t mean everyone else is on the same page.”

Ana Giachino is trying to raise her 15-month-old daughter, Clara, in what might be described as a “gently” gender neutral environment, encouraging her to play with traditionally “masculine” toys, and dressing her in both blue overalls from the boys’ section and pink dresses.

She made the decision after she read an article about how women may be missing out on certain careers “because they were taught since birth to play with dolls and kitchens, and how to cook, and take care of their baby dolls, while men were more prone to work in a technology field and engineering because they were brought up playing with Lego”.

She wants Clara to grow up understanding that “stereotypes exist only to label people and put them in a box. And humanity is not that; we are a diverse bunch and we should embrace that.”

Murphy says that, since he became a father, he has noticed a growing acceptance of gender as more complex than a simple question of either/or. “I was playing cars with Tom recently and my own Dad said, ‘you never know, that driver could be non-binary’. He was being playful, but that wouldn’t have happened 10 years ago.”