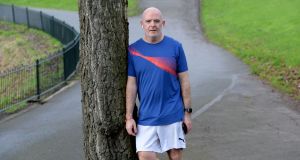 ‘Thinking to myself that if I managed three or four kilometres, it would be enough, I started running.’ Photograph: Alan Betson

When my Big Run ended last week I was expecting some class of parade or balloons or – at the very least – a group of ruddy faced and wildly cheering men to lift me enthusiastically onto their shoulders like I was a Fianna Fáil candidate who’d just been elected on the 11th count in a community hall in Tipp.

But there was none of that. There was just me, standing outside my front door looking at my watch and then at my phone to make sure they tallied.

When I woke up on the morning of my Big Run I had no interest in running. None whatsoever. As I lay in bed I counted all the reasons I should give it a miss. I had to get into the office. It was cold. I had been to the gym twice in recent days and sure wasn’t that enough? My limbs were a bit on the sore side. My running gear was in the wash. It was cold.

I had myself convinced and had all but decided to give the run a skip when an infuriating pang of guilt got the better of me. I pulled on my running gear – which wasn’t in the wash at all infuriatingly – and set off for the Phoenix Park with all the enthusiasm of a teenage boy heading into an orthodontist.

Thinking to myself that if I managed three or four kilometres, it would be enough, I started running. My legs were leaden and my mood was bad and I shuffled along like an auld wan heading off to get her messages on pension day.

But then something strange happened. As I lumbered through the gates of the park under bright blue skies and a canopy of light speckling trees flirting with buds that were threatening to turn into leaves, I started to feel just a bit invigorated.

“There are worse ways to spend a morning,” I thought to myself as I widened my stride and picked up my pace ever so slightly.

Without giving it too much thought I ran almost the length of the park heading away from my house. towards Castleknock along the side road which runs parallel to Blackhorse Avenue and the back of the zoo.

At the end of that road, having run for 20 or so minutes. I had no option but to run at least 20 minutes in the opposite direction to get back to my house. I ran along the main thoroughfare of Chesterfield Avenue and as various landmarks passed, I found myself running faster – not much faster but my pace quickened with each five minute block my running app recorded.

As I got to my house my watch and my running app both told me I had a ways to go yet. But not a long ways

Running past the Áras, my app told me I had around seven kilometres done. “You run like a rhinoceroses – don’t worry they’re fast,” it said hilariously.

Some calculations told me I needed a detour so I ran around the polo grounds and then did a circuit around the back of the zoo before leaving the park and running through the what was once the O’Deaveney Gardens, past a burnt out car and a couple of horses and then to my front door.

As I got to my house my watch and my running app both told me I had a ways to go yet. But not a long ways. I had covered a distance of 9.7km. So I kept running and went up and down a stretch of my road twice like an eejit and then got back to my house where I looked at my watch.

Rather than nodding impassively to myself and going in for a shower, I took a photo of my watch and sent it to everyone I thought might care about my feat. And to quite a few people who I knew wouldn’t give a rashers.

I know that my time of 64 minutes and 26 seconds was very poor (for me), but I have time to get that time down. Not sure yet how I will do it but somehow I will manage.