Teaching parents how to cook from scratch – in 40 minutes

At cookery instructor Jolene Cox’s classes, students learn that cooking a nutritious family meal – from press to plate – is far from complicated 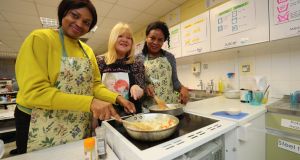 Food blogger and cookery instructor Jolene Cox is on a mission – to bust the myth that cooking from scratch is complicated. The author is currently teaching parents how to cook simple family meals from scratch – “from press to plate” – in 40 minutes.

We catch up with her with a group of 11 mothers in the home economics classroom at St Paul’s Secondary School for Girls in Greenhills, Dublin.

The first thing you notice is the aromatic smell of curry wafting out of the classroom as the women chop vegetables and chicken for their dishes under the supervision of Cox. As they chat and stir in spices to their “curry in a hurry”, the mood is relaxed and happy.

“I give parents the tools to cook six dinners on the six-week programme,” says Cox. “This will give them the confidence to cook more. I try to get away from calling it healthy eating, but I do want to revolutionise how families eat.

“Cooking from scratch will save people money and is good for their health overall and it’s lots of fun cooking together. It’s about making it all less daunting to move away from packets and jars.” she says. For each class, the parents bring in their own ingredients, use all the facilities of the home economics classroom and go home with the dinner already cooked for that evening.

Eileen Creagh is busy making her “curry in a hurry”. “I don’t particularly like cooking and normally I’d just add a packet of curry sauce to chicken, but now I’m adding spices, celery and peppers,” she says.

Michelle Kennedy is thrilled to have the evening’s dinner made early. “I like having good healthy food at home and getting the kids to eat before they go out so they don’t eat too much junk food. Also, it’s good to show them how to make smoothies at home.” Kennedy says her 14-year-old daughter eats “with her eyes” so if the food looks good, she’ll eat it. “But, I do chop the vegetables up small to hide them,” she adds.

Audrey Devereux says her 11-year-old son and five-year-old daughter have completely different tastes in food but that she’s starting to get them to eat the same food. “My five-year-old helps me make brown bread rolls with yoghurt and I now make my own chicken goujons and chips from scratch. It’s more enjoyable sitting down to a meal that you’ve made yourself instead of something from a jar.”

Laura Byrne admits that sometimes she cooks three different dinners so that her two teenagers and two younger children will eat their dinner. “I’d be stressed out and sometimes I say no. If I keep the leftovers, they aren’t used and I end up throwing them out,” she explains.

On the issue of picky eaters and mothers cooking several meals at the same time, Cox says it’s about sitting down with the children and working out how to improve things. “Children need to taste things seven times, so what I say is if you don’t like it, taste it again in a while. But, I also say to parents, if children don’t like one ingredient in what you’re cooking, leave it out.”

When you look at cookery programmes on the television, the recipes can be over-complicated with too many ingredients, which puts people off

Cox also advises parents to include their children when they are planning meals for the week so that food isn’t wasted. “I say to people if you’ve a roast chicken or pork on a Sunday, that can be turned into sweet and sour dinner the next day and you’ll have many of the ingredients in your press already.”

In her book, Cox encourages people to have a good range of store cupboard staples and make a good shopping list when you’re going to buy food. She says the key to successful family meals are recipes with a limited number of ingredients. “When you look at cookery programmes on the television, the recipes can be over-complicated with too many ingredients, which puts people off.”

Faith Idada says her family usually buys curry as a takeaway and now she’ll be cooking it herself. “I’ve never prepared curry like this before, thickening it with flour and using spices but I do buy fresh ingredients at the street markets and Arabic and Indian shops in Tallaght. ”

Aiveen Forde is back with Cox for the second time, having completed a four-week cooking course earlier. “I feel more comfortable to look up recipes now and try them at home and I’m doing more baking.”

And when it comes to treats, Cox is adamant they can’t be part of everyday eating. “The problem now is that children are looking at treats as food and part of their everyday diet. Treats shouldn’t be something you eat just after dinner. And I don’t agree with rewarding good behaviour with food. Reward them with your time.”

And, what about children cooking for themselves? Take a look at Cox’s Instagram and you’ll see how she’s already encouraging her six-year-old daughter, Lily-Mae, to do just that. A recent post showed how she made homemade brown bread. “Children love the one-to-one contact of cooking with you. They are talking to you while learning a new skill and it gives them a great sense of accomplishment,” says Cox, whose original training is in childcare.

Mark Dowling, the principal of St Paul’s Secondary School, says getting parents into the school is a good thing. “Some of these parents won’t have had a positive experience of education themselves so it’s about the partnership in education between the parents, school and students.”

Caroline Gallagher, the home-school community liaison officer at St Paul’s Secondary School, says having parents involved in the school improves attendance and retention rates. “It promotes lifelong learning and the value of education in the school community. Being in the school also makes it easier for parents to meet a teacher or the principal if a student has an issue with something.”

Cox also runs cooking classes in schools in Drimnagh and Walkinstown and she’s keen to spread her work across Ireland. “I’d like to train women who’ve done the course so that they could run family cookery courses in their communities.”

With seed funding from Social Enterpreneurs Ireland and support from her Local Enterprise Office, Cox is already taking the first steps to make her dream a reality. “It’s a great way to bring a community of women together and offers the possibility of part-time employment for mothers [in the home] when their children are at school.”