Remembering Christie Hennessy: ‘I’m in mourning every day, but am putting my best foot forward’ 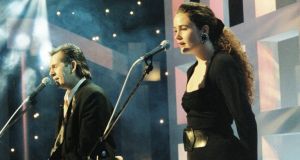 Current figures estimate that one in two of us will be affected by cancer in some way during our lifetime.

I’ve lost loved ones to the disease and have seen others go through it – as I’m sure has everyone else in the country – so whether you are suffering or caring for someone with cancer, there doesn’t seem to be any escape from it.

February 4th is World Cancer Day, (see cancer.ie), when we are all encouraged to become aware of the signs and symptoms of the disease – because early detection can help save lives. And if we know what to look out for and how to minimise our risks of developing it, we stand a greater chance of a positive outcome.

Hermione Hennessy Ross knows only too well how cancer can decimate a family – over a decade ago, she lost her beloved father Christie Hennessy to lung cancer. The singer-songwriter, who was originally from Kerry, spent many years working on building sites as a decorator, which is where, it is believed, he came in contact with asbestos, which later led to him developing cancer.

“He left school early and wasn’t able to read or write, so when he went to London, he spent 25 years working in the building trade while also performing as a singer,” says Hermione, who has two siblings, Amber and Tim.

“My dad was utterly remarkable, otherworldly almost, which is why he became a star. I managed him from when I was 21 to about 25 and signed him to U2’s Mother Records label so we became incredibly close. He was the greatest dad anyone could ever wish for and as well as being kind, thoughtful, loving and sensitive, was also a great storyteller and listener.

“During the summer of 2006, he developed a persistently dry breathless cough which increased toward the Christmas period and sometimes he saw fresh blood when blowing his nose or spitting into a tissue. He was nagged by everyone to go to the GP but when he did, he was told there was nothing wrong.”

But the symptoms persisted and in January of 2007, Christie, who had a major tour coming up, went back to see his doctor and was put on a course of antibiotics. He was also sent for an x-ray which revealed a “black mass” on his left lung. TB was suspected and stronger medication was prescribed but instead of getting better, his condition got worse, so he was referred to a specialist, who drained his lungs.

Then, at the end of his tour in April 2007, he went into hospital for a biopsy and was diagnosed with mesothelioma (a form of cancer).

But although it was confirmed he did indeed have a terminal illness, the father of three continued to live life to the full. “He didn’t make a huge deal of having the big C,” says Hermione, who is also a singer-songwriter, and will be performing at the Choirs for Cancer 2020 event in UCD this afternoon to mark World Cancer Day. “Instead, he tried to get a grip of it and come to terms with the diagnosis, so went on tour, carried on making plans and writing and being as brilliant as he was. He believed in mind over matter and that positive thinking was the only way forward which could potentially provide a cure – despite being aware that only 2 per cent of those diagnosed with the disease [the particular stage and strain which Christie had] will survive.

“He was given radiotherapy on the site of the biopsy and he tried diets and extensive amounts of supplements from alternative medical and holistic practitioners and healers, alongside traditional cancer diets. But it was only when he was told by the specialist to eat high dairy fats and meat to put on weight that he felt stronger. We looked at all the best holistic treatment centres around the world, but Christie decided he didn’t want to leave his family behind chasing theories and practices which weren’t necessarily proven to work.

“He believed he would beat the disease and really thought he could fight it right up until the day he died. He believed anything was possible as his mum was given months to live when she had cancer from head to toe but she lasted 12 years. I know he believed that by using the power of the mind and spirit, one can overcome almost anything.”

Christie began a course of chemotherapy in November 2007, but he reacted badly to it and wasn’t well enough to undergo a second round so, in excruciating pain, was admitted to a hospice a couple of weeks later and not long afterwards, he sadly lost his battle and died.

“The cancer spread very rapidly to his stomach, so he was moved to a local hospice for pain control,” says his wife, Gill. “He was there for two weeks and seemed to be doing okay, but the end came very suddenly. He was still walking, talking and using the bathroom unaided [right up until he died] – that was just the man he was. He lasted just seven months from diagnosis to death.”

Daughter Hermione agrees and says her dad never stopped working and planning throughout his illness. And right up until the end was determined to find out why he had developed cancer.

“The hospice upped his doses of pain medication, which I challenged them about as he wanted to be fully compos mentis,” she says. “So he actually managed to stay fully cognisant listening to music, talking about plans for tracks which needed re-working and watching TV until 6pm on the evening he died. He said ‘goodbye’ before losing the power of speech and passing away at 5am on the 11th December a few weeks after his 62nd birthday.

“During his period of illness he worked with solicitors in an attempt to isolate where he had come into contact with asbestos. It was found to be most likely contracted in his mid to late teens (from 17-22) when he would rub down asbestos pipe covers before painting. He did this for six months while he was working in the basement of a new-build art college.

“He didn’t want to pursue a financial claim but realised that as he didn’t have a pension, he should for my mum’s sake. And, most importantly, he wanted to raise awareness of the disease as best he could, so he decided to make it public a few months into his treatment. The London Pensions Authority paid out [the compensation] from a fund they have in place for the disease.”

Hermione says she and her family are still grieving for Christie. “We really don’t talk about it now as the pain I feel is still truly quite unbearable,” she admits. “We tend to talk about the happy times as that would be how he would have wanted it – but I am still not coping. I’m in mourning every day, but am putting my best foot forward, as again that is what he would have wanted.”

Remembering how long it took for her dad to be diagnosed, the artist says people need to be aware of their health and seek a second opinion if they don’t feel something is right.

“Many people, especially men, are reluctant to go to the doctor with any kind of illness as they believe it will pass,” says Hermione. “As loved ones, we must take the time to encourage them to go and not give up until they do. And if the diagnosis reveals that nothing is wrong, but your gut says there is, keep going. No one person, not even the greatest of doctors, specialists or scientists has all of the answers – so listen to yourself.

“When dad had been coughing up blood, I wish I had been quicker to push him to go to the doctor for a second time and to pay attention to the problem, which looking back, was simply not normal, healthy daily behaviour in a very healthy man who had never smoked, drunk [alcohol] or taken a drug in his life.

“And if the saddest of most unfortunate thing happens and your loved one is diagnosed with a cancer which was contracted from being in their place of work – which now stands at 5 per cent in Ireland – there is legal and financial help out there. Christie didn’t want to pursue this route at all but if he hadn’t, my family wouldn’t have had the financial support they needed to continue with their lives after his loss. This doesn’t bring the person back, but it sheds a light on the issue and keeps what is still an ongoing problem in the public eye.

“Cancer can happen to any of us, at any time, so we need to live and love every day and our loved ones.”