Along with the chronic physical illnesses of diabetes and fibromyalgia, Emma Donoghue (26) has had postnatal depression and anorexia to contend with. But life is slowly getting better 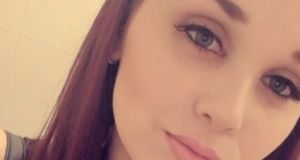 Emma Donoghue: “My advice to anyone with an eating disorder would be don’t try and deal with it on your own. Talk to anyone, a friend, a teacher, a parent or a professional. Get that stress off your chest.”

It would be far too simplistic to say that not liking Harry Potter as a child was the start of Emma Donoghue’s problems, but it is something that came up when she tried to get to the root of her mental and physical health problems.

“I had a background of depression and anxiety. I was bullied through primary school and so I always had that feeling of not being good enough,” says the 26-year-old native of Killargue, Co Leitrim.

The memories of feeling isolated in a small rural school resurfaced a few years ago when Donoghue sought professional help following a staggering number of health setbacks. She had been diagnosed with two chronic illnesses which she still deals with – type 1 diabetes and fibromyalgia. Soon after the diabetes diagnosis came diabulimia.

“With bulimia, a person consumes food but goes to the bathroom and purges or throws it back up, and with diabulimia you stop taking your insulin to lose weight,” explains Donoghue. Unfortunately, she then developed diabetic ketoacidosis (DKA), a serious complication of diabetes which can result in coma or death. In Donoghue’s case, it led to more than 10 hospital admissions over a four-year period.

Throw into that mix a teenage pregnancy, postnatal depression, anorexia, and an addiction to codeine that had Donoghue sometimes visiting two pharmacies on the same day because she knew questions would be asked if she bought more than one packet of Nurofen Plus.

It sounds like an unbelievable amount of trauma for one person, but Donoghue feels she has got her life back on track and is hoping her story might provide a chink of light for others feeling overwhelmed.

Tomorrow night, February 12th, in Carrick-on-Shannon, she will attend a conference on mental health, Leitrim’s Health is Wealth, where her psychiatrist Dr Ed O’Mahony will be among a panel of speakers. Also there will be Catherine Corless, champion of the Tuam babies’ families, writer Michael Harding, former minister for justice Nora Owen and All Ireland-winning Dublin footballer Shane Carthy, all with their own insights on mental illness. The event was launched four years ago by two Leitrim-based community mental-health nurses Hubert McHugh and Valerie Cogan “to start a conversation around mental health in order to remove the stigma”.

The pair could see how high the suicide rate was in Leitrim and had realised a common denominator for many struggling with depression was loneliness and a feeling of isolation.

Although she didn’t think too much about it for years, Donoghue says that feeling of isolation was acute when she was a child . Even a “best friend” who played with her at the weekends would have nothing to do with her at school.

“They were all into Harry Potter and Lord of the Rings and really heavy metal rock and I wasn’t into that and I wasn’t going to change myself, just to fit in,” she recalls. “I suppose I am headstrong so maybe I isolated myself. I did feel I was left out of a lot of things.”

After a year in college, Donoghue was diagnosed with type 1 diabetes, which means four injections a day and, crucially for her, a feeling of not having control over her body. “If we were having a meal now in this café, I would pretty much have to get out my stomach and inject it and have everyone staring – or go off to the toilet and you feel a bit vulnerable and isolated having to go and do that.”

She had no counselling after the diagnosis “and it was hard to come to terms with”. Donoghue believes her diabulimia was a reaction to no longer feeling in control of her body, rather than about losing weight, but admits she had also started to skip meals. “I skipped breakfast a lot, and then I mightn’t bother to have lunch when in town.”

A form of denial

Not taking her insulin was really a form of denial, she believes. “I was not taking my diabetes as seriously as I should have and it was about control. You might not be able to control a physical illness or being bullied but you can control what you are eating.”

Just three months after being diagnosed with diabulimia, which she stresses is a mental illness, the then teenager discovered she was pregnant with her daughter Mollie, now aged six. “That threw everything up in the air. You feel you are being judged. And, of course, you gain a bit of extra weight when you are pregnant. I knew this [not taking her insulin injections] would make me lose weight.”

I stopped eating, slowly cutting down. I had it in my head if I didn’t eat carbohydrates I wouldn’t need to inject

Luckily, her parents Mick and Kay were there for her and for Mollie for the tough year, because not only did she have life-threatening episodes of diabetic ketoacidosis, but there was also severe postnatal depression after Mollie was born.

Incredibly, she also developed anorexia. “I stopped eating, slowly cutting down. I had it in my head if I didn’t eat carbohydrates I wouldn’t need to inject.”

After one particularly severe DKA episode, she was diagnosed with fibromyalgia, which is characterised by severe pain and fatigue, “and that’s when the codeine addiction kicked in”.

Donoghue is mortified now to recall doing the rounds of pharmacies in Sligo, Carrick-on-Shannon and Manorhamilton to buy Nurofen Plus “but that was the addiction”.

In her weakened condition, she was forced to give up her job and she remembers days when she lay in bed after dropping Mollie to playschool. “Sometimes Dad had to bring her as I didn’t physically have the energy.”

Did her parents know she was not injecting? “I lied. You become a compulsive liar.”

She had a name on her anorexia. “I called her Anna because she was another voice in my head telling me ‘don’t eat that. You’ll get fat. Nobody will like you’.”

After yet another hospital admission when she was at breaking point physically and mentally, Donoghue was fed through a nasal tube . It was “vile” but it was also a turning point. “I didn’t fight it. I was down to about 6st [38k]. I was literally skin and bone. My hips were protruding , so was my my collarbone, my shoulder blades, and my spine.”

She spent almost three weeks in hospital and was referred to Mary Harron, a mental health nurse specialising in eating disorders who like Kay and Mick, is a hero to her. “She got me through. I was never judged, never made feel bad about what happened. She reassured me that it was not my fault, that it was just the illness.”

When she came home, it was still hard. “Mum would put a plate of food in front of me and I would cry my eyes out.”

But life with Mollie is good and she has plans. She has already shared her experiences with nurses intending to specialise in eating disorders and she herself is planning to do nursing at St Angela’s College, Sligo, where she is doing an access course.

She’d also like to talk to young girls – and boys – about eating disorders. “I eat very well now. I have been about 9½ stone for 18 months. I suppose my advice to anyone with an eating disorder would be don’t try and deal with it on your own. Talk to anyone, a friend, a teacher, a parent or a professional. Get that stress off your chest.”

There were times when she thought about suicide and she says that anyone with mental illness should get professional help.“But I feel that we don’t have enough professionals. There are not enough Marys – there is only one person doing that job in this region – Sligo Leitrim, parts of Mayo and Donegal.

“If there is nobody to help, it can exacerbate the problem because if you have to wait for months you do start to think ‘am I worth it? Maybe it is all in my head if they are not taking it seriously. Maybe there is nothing wrong with me.’ But there is.”