Sanctuary Runners: ‘The transformation in people’s lives has been amazing’

Sanctuary Runners, which brings asylum-seekers and Irish people together for runs and races, started in Dungarvan in 2018 and now has 1,500 members in 18 locations 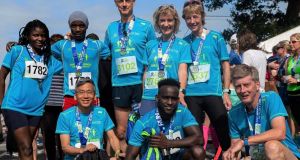 Sanctuary Runners at the Run Killarney 10k event in July, 2019.

The entrance to the IDA business park in Dungarvan is pretty unremarkable. If you didn’t work there you’d miss it.

But for me it’s a cherished spot.

It sits at the top of a hill on the route of the John Treacy 10-mile road race in the Co Waterford town and when you’re about to drop and nearing home, that downhill is heavenly.

But even more poignantly for me, this is where I dreamt up the idea for the Sanctuary Runners on a cold February morning in 2018. Using running to bring Irish people together with asylum-seekers and refugees on a regular basis in a team of equals, the movement has snowballed – we now have 1,500 members in 18 locations across Ireland and were last year named as one of the best social inclusion in sports initiatives by the European Commission.

To celebrate our second birthday, a group of us returned to Dungarvan last Sunday to run in this hugely popular race. Organised by the West Waterford Athletic Club, it’s flawless from start to finish. A dream run.

Amongst our team on Sunday was Rahali from the beautiful port city of Oran in Algeria – he’s a big man for the judo and is in direct provision in Waterford city. Ciara is a mum of four, born in Germany but now living in Tramore and the coordinator of the Waterford Sanctuary Runners. Blaise, from DR Congo, was the first Sanctuary Runner living in direct provision to run a full marathon and now he’s run in two. He’s a gent, always positive, smiling and supportive of others. Then there’s Joe Barrow, a cattle farmer from Mallow. Before last year, he’d never run – now he’d keep a power plant going he’s pounding the road so much.

The labels of citizen, resident, asylum-seeker or refugee have disappeared once that blue top is pulled over the heads of the runner

An eclectic mix of people which also includes Busie from Zimbabwe, who believes the Sanctuary Runners has transformed her approach to life as an asylum-seeker.

I remember after crossing the finish line in this race in 2018 immediately rushing up to my wife and shouting out the words ‘Sanctuary Runners’.

The seed had been sown.

How we treat asylum-seekers

After years of writing about and reporting on migration and, often, direct provision, I had grown tired of the lack of impact. Perhaps my pieces weren’t good enough to make people stop and think about how we treat asylum-seekers in the western world – or perhaps people had become immune.

This is more about the society we want to build. One where solidarity, friendship and respect dictate how we treat each other

So, using the three principles of solidarity, friendship and respect as the structures of our movement, we started building in early 2018. Clare Keogh, a superb photographer and friend, put her shoulder to the wheel too and we had 200 Sanctuary Runners participating in the Cork City Marathon in 2018. Last year, that number jumped to 360 and this year, on May 31st, we’re hoping to have 1,000 Sanctuary Runners in the event supported by Cork City Council (see Sanctuaryrunners.ie).

We’re launching an ‘Open Your Doors’ campaign, where we’ll be asking the good people of Cork city to put up Sanctuary Runners on the night before the race.

In all, we’ll run in more than 50 races across Ireland this year as well as at Parkruns in every corner of the country.

Over the last two years, the transformation in people’s lives has been amazing. Of course, the physical and mental-health benefits for those in direct provision are massive but the impact on Irish people has been immense too. Our volunteers are amazing people from every walk of life.

Friendships have flourished. The labels of citizen, resident, asylum-seeker or refugee have disappeared once that blue top is pulled over the heads of the runner. By the way, we welcome joggers and walkers too.

Our members vary in age from eight to 80 years’ old. We have Olympians such as Olive Loughnane, Rob and Marian Heffernan and Claire Lambe, who run with us. Others such as Sonia O’Sullivan and Lizzie Lee kindly donate running gear and then people such as the wonderful Adebayo, from Nigeria, who stays in the Clondalkin Towers direct provision centre, walks with the Dublin group every week without fail despite suffering a stroke two years ago.

Recent groups have been established in Kenmare, Tralee and Meath, and soon we’ll have more in Ennis and Monaghan.

Last week, I was in Brussels speaking with officials from Milan and Bilbao who are interested in working with us. They share the same problem. A population of asylum-seekers and refugees but no obvious bridges to the general public.

And where those bridges don’t exist and a vacuum emerges, the circulation of assumptions, fear and mistruths escalate.

The Sanctuary Runners will also be staging a ‘Solidarity Run with Migrants’ at a Parkrun near the Olympic Stadium in Tokyo during the games on August 1st. We’ve the support of bodies such as the Olympic Federation of Ireland and the Irish Embassy in Tokyo.

We, as a movement, are not political and protest is not part of what we do. That’s been especially appealing to Irish people, who want to run shoulder-to-shoulder with those seeking international protection and a better life for themselves, and often their families too.

This is more about the society we want to build. One where solidarity, friendship and respect dictate how we treat each other. One where we see the person, not the asylum-seeker. Where we celebrate all we have in common rather than magnify that which might be different.

Once down the hill and on the home straight, I spotted the blue tops ahead of me. I felt a lump in my throat. An idea has become a powerful movement of positivity. This is the best of us and I felt proud to be Irish. Now we want to grow, develop and bring our concept to the world. And it all started here, on the backroads of Dungarvan.