Let the games begin: celebrating being well and thanking a donor

Transplant Team Ireland member Ron Grainger from Castleknock, Co Dublin, is a retired urologist and kidney transplant recipient. This week he will compete at the World Transplant Games in Spain 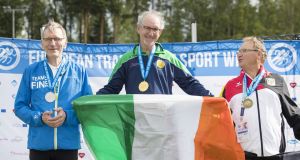 Track and Field, European Transplant Sport Week 2016, Vantaa, Finland. Ron Grainger is the man with the gold medal and Tricolour 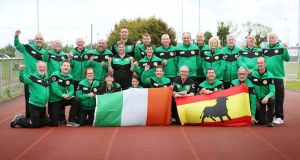 Members of Transplant Team Ireland with Kilkenny GAA Hurling legend Michael Fennelly at Dublin Airport, ahead of their participation in the World Transplant Games in Malaga

The 21st World Transplant Games will take place in Malaga, Spain, from June 25th to July 2nd. I will be competing as a member of Transplant Team Ireland, which competes under the auspices of the Irish Kidney Association.

This year we have 28 competitors on our team and we will be represented in cycling, swimming, road running, golf, tennis, squash, virtual triathlon, 10-pin bowling, pétanque, darts, and athletics.

The governing body for the games is the World Transplant Games Federation (WTGF), which is recognised by the International Olympic Committee (IOC). The presidents of both organisations recently signed a memorandum of understanding strengthening their links.

All competitors must have received an organ (heart, lung, liver, kidney, pancreas) or bone marrow transplant. Competition is managed in age categories. For example, as a 67-year-old, I will compete in the 60-69 age group.

The games aim to highlight the success of organ transplantation in returning people to high levels of health and fitness and in so doing promote organ donor awareness. Personally, I am competing to celebrate being well 13-and-a-half years after my kidney transplant, but more importantly to honour my donor and their family who have made this adventure possible for me.

This will be my first World Games, though I have competed in the last two European Transplant and Dialysis Championships. Last year’s Europeans in Finland was the first time I had competed in a sprinting event in 48 years. As with last year, I have entered for the golf and the athletics – the 100m, 200m and long jump.

After almost a half-century of limited activity, returning to the gym proved, and continues to prove, a significant challenge. Fortunately, I have Gary Brown of Origin Fitness, who has guided me through a programme of strength, conditioning, flexibility and the technical aspects of sprinting. This allowed me to have a very successful European Championships in Finland and while it would be great to repeat those feats at World level, my main goal is just to be there and be thankful that this is possible.

Preparation for these Games began in September 2016 and my winter schedule was two gym sessions per week, working on strength and mobility. From January onwards, I introduced running to improve my conditioning. As with even elite athletes, not all training programmes run smoothly and in early May I suffered a recurrent tear of the medial meniscus (cartilage) in my right knee, requiring a significant period of rest and lost training time. Shortly after returning to the gym, I suffered an accident resulting in a broken finger. Despite these events I am still going to Malaga and will compete to the best of my ability.

Last year the WTGF invited applications from the transplant community as ambassadors for their Fit For Life campaign. The goal of the campaign is; “More Transplant Recipients, More Active, More Often”. I was one of the first 13 World Ambassadors appointed. The campaign was launched at the memorable Ireland vs New Zealand rugby match in Soldier Field, Chicago, on November 5th, when Ireland beat New Zealand 40-29. We were introduced to the crowd on the pitch at half-time. Since then, we have been working to disseminate the campaign messages to both transplant recipients and their carers.

The World Transplant Games take place in Malaga, Spain, from June 25th to July 2nd. The 29 Irish competitors range in age from 30 to 79 and include nine women. They will join others from more than 50 countries. It is the biggest gathering of transplant recipients for the World Transplant Games so far, with almost 1,000 competitors registered to take part. See transplantteamireland.ie